From Junior Scholastic, Vol. 40, No. 15 (May 17, 1957). This poem won first prize in their writing awards, poetry division. My bio in that issue: “JONATHON [sic] ROSENBAUM says his poem grew out of a speech he wrote for his Bar Mitzvah. This is a ceremony at which Jewish boys of 13 enter into the full duties of their religion. He is 14 and attends Florence (Ala.) Junior High. He became interesting in writing at first through drawing comic strips. Now he writes both stories and poems, and his ambition is to become an author.”

As I recall, this poem was submitted to the Junior Scholastic Writing Awards via my home room teacher, who tried changing the last line to, “So begins eternity,” until I protested and got her to change it back.-– J.R. 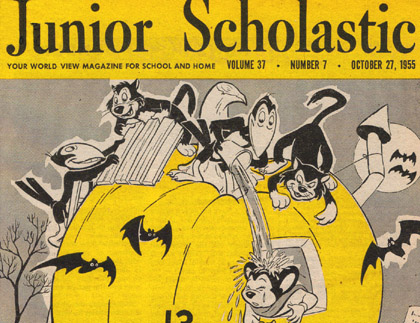 Along a dark and dusty road

The mighty one does stride, His eyes as endless as the stars,

With no one by his side.

He walks through bright and friendly towns,

He goes through slums and slime…

He goes through all that is or was,

An aged one called Time.

He goes not right, nor left, but straight;

His face a frosty stare –-

Emotionless, and yet he leaves

A feeling in the air.… Read more »