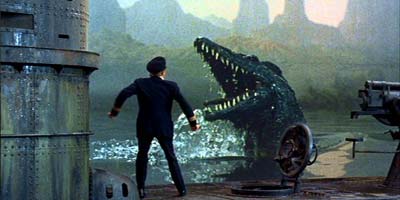 Land that Time Forgot, The 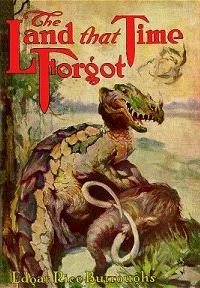 A canister is tossed into the sea and discovered on the coast of Land’s End, containing a manuscript by the American Bowen Tyler which relates the following story: 1916. A British supply ship is sunk by a German submarine; the survivors include Bowen, biologist Lisa Clayton and a few members of the crew. Together they take over the submarine from Captain von Schoenvorts and Dietz and head for the U.S., but lose their way after their radio is destroyed in an attack by a British warship and their compass rigged by von Schoenvorts; Bowen orders the sinking of a German supply ship, only to discover that their last source of rations is destroyed in the process. Finally coming upon an island with an inhospitable coastline surrounded by icebergs — identified by von Schoenvorts as the legendary Caprona — they find an underground river and Bowen charts their path to dry land.

There they discover a prehistoric world occupied by dangerous beasts, early evolutionary forms of man, and a variety of curious life-forms in the river. They capture a primitive man who calls himself Ahm, conveys to them in signs that Caprona has large deposits of oil — needed for the submarine in order to leave the island — and reluctantly takes them north to the spot; on the way, after they are attacked by the Sto-Lu and encounter other, progressively more ‘developed’ tribes of ape-men, Ahm is killed and carried off by a pterodactyl. After setting up camp and drilling for oil, Bowen and the British members of the party head north to explore while the Germans store the oil in barrels. The former come upon a Sto-Lu village where the women lay eggs in a communal bathing pool, thus revealing the island’s ‘secret’ — that each native of Caprona passes individually through all the evolutionary stages, gradually migrating northward as each new level is achieved. Lisa is captured by the Sto-Lu, and rescued by Bowen only after he contends with the more advanced Band-Lu. A volcano erupts, and as Benson and Lisa attempt to return to the submarine, Dietz forces von Schoenvorts and the other Germans to leave without them, shooting the.former when he attempts to stop them, before the submarine is consumed by lava. Lisa and Bowen continue their northward journey, repeat vows to one another, and seal their story in a canister which they toss from a palisade . . . 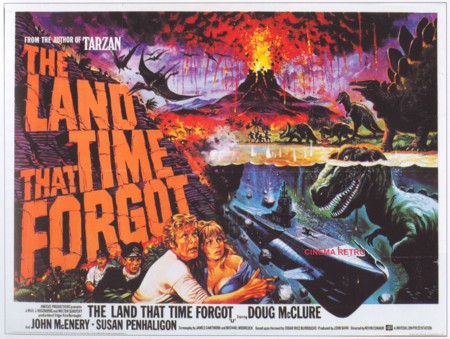 The Land that Time Forgot made its first appearance in the August 1918 issue of Blue Book magazine, six years after Edgar Rice Burroughs gave birth to Tarzan in his second. published story. Like all his more popular novels, it inevitably ran into sequels — The People that Time Forgot and Out of Time’s Abyss – which have apparently been used to flesh out some of the details of this screen version (including the solution to the island’s mystery).

One senses throughout the film a respect for the original — deriving, one gathers, both from Michael Moorcock’s participation on the script and the presence of Robert H. Hodes from the Burroughs estate during the shooting — that is a far cry from the usual science fiction adaptation. Many of the changes appear to be designed to minimize some of the more jingoistic and Victorian elements, such as the hero’s anti-German remarks and his romance with the heroine (called Lys La Rue in the novel, and decked out with all the fluttery sentiments that the name implies — and none of the scientific background that the film gives her), all of which would likely be risible and/or embarrassing in a contemporary context. The major drawback to this kind of cautious piety is a certain scaling down of the more ‘primal’ emotions appealed to by Burroughs — a kind of sustained sexual and racial hysteria that makes the original a lot closer to King Kong than this tamer and more moderate version. What remains, however, is rendered with a fair amount of care and intelligence, in an efficient script that keeps the action moving briskly, directed capably by Kevin Connor (if rather facelessly acted by most of the participants). But the show unquestionably belongs to the technicians who worked on the visuals: the careful highlighting of colors in the early sea episodes, played against virtually black-and-white backdrops; the lovely and richly detailed first glimpses that we have of Caprona; the splendid use of orange tints in the volcanic climax — these and other effects suggest some of the taste and imagination of the better science fiction illustrators, like Virgil Finlay, Hannes Bok and Ed Emshwiller. Roger Dicken’s pterodactyl is also an elegant creation, although most of the “dinosaur sequences” suffer from the problem of making an exhausted conceit appear fresh, and some of the artifice — like the use of rear- projection — is a bit too noticeable in spots. Nevertheless, The Land That Time Forgot can chiefly be regarded as a credit to its craftsmen, and a serviceable — if only intermittently inspired – contribution to the Lost World genre. 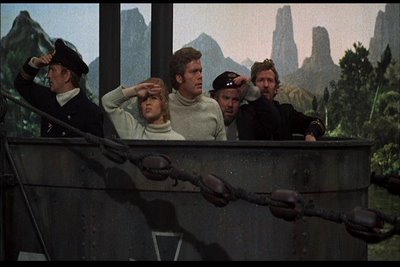