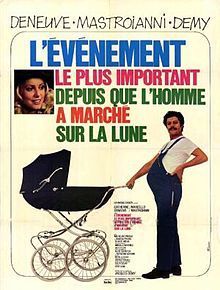 The Slightly Pregnant Man is the English title of Jacques Demy’s latest film, although a literal translation of the French would be more appropriate — The Most Important Event Since Man Walked on the Moon. The event is pregnancy, and what makes it so important is that its baby’s carrier is not Catherine Deneuve, who plays the mother, but Marcello Mastroianni, who plays Poppa.

The first question you or I might ask is how Mastroianni manages to get pregnant in the first place, which is something Demy declines to answer. Instead, he tries to coast along on a jaunty score by Michel Legrand (who composed the music for Demy’s Umbrellas of Cherbourg). Without the basic question answered, The Slightly Pregnant Man doesn’t really work, but it is a weird kind of fun. We get to watch Mastroianni get sick in a movie theater, rush to the doctor and receive the wonderful-terrible news. He gets exhibited to a medical convention, marries Deneuve (in order to save the child embarrassment) and –as you can see — begins to model male pregnancy clothes for a maternity firm. The clothing manufacturers are overjoyed — they’ve just discovered a great new market for their products.

Mastroianni gives up his job as a driving instructor, since he’s forced to model full time. Actually, it’s a pretty good deal—for he’s now too fat to fit behind the steering wheel of his car. Things pretty much go on in this vein. Mireille Mathieu is enlisted to sing a couple of songs. As the delivery date nears, we begin to ask the second important question–what part of a man’s body will let a baby come through? Demy tries to finesse this one as well. It turns out that the pregnancy is false. So why care? At least the colors are pretty. 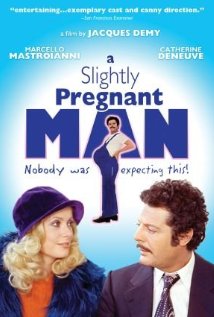 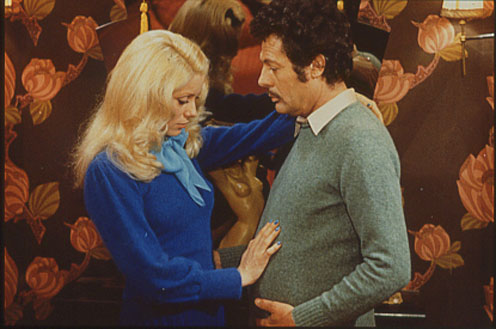