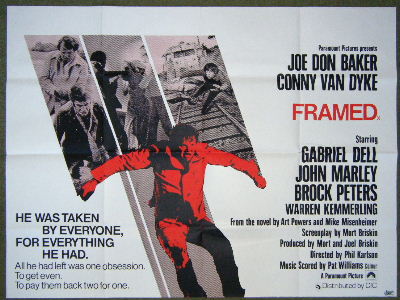 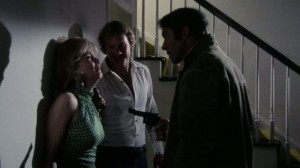 Discounting some lamentable lab work and five minutes of censor’s cuts in the version under review — which apparently include a rape and some protracted pre-murder mayhem perpetrated by the hero against a failed kidnapper (shooting one ear off and prodding the other with hot wire, until he gives out information) — it is difficult to imagine what could have been salvaged from such a nonsensical collection of plastic characters and cardboard stances, where the narrative proceeds as if by hiccups and the film’s dramatic highlight is provided by the hero remarking of a minor villain, “First time I ever saw a tub of shit in a suit”. Dottiest, perhaps, of all the details in the unconvincing patchwork plot — which include the hero’s finding his cache of money intact years after it has been stolen — is the death of head villain Morello at the jaws of his own Doberman, an outcome presumably motivated. by the dog’s own moral reckoning after a careful perusal of the script. After surviving so much gratuitous meanness and dishing out so much nastiness in return, Joe Don Baker increasingly takes on the appearance of an uninteresting automaton, receiving injustice like a punching bag and dispensing its alleged opposite with the expressiveness of a vending machine Warmer, more likeable presences are afforded by Brock Peters and an unidentified piano trio playing behind and between Conny Van Dyke’s forgettable songs.