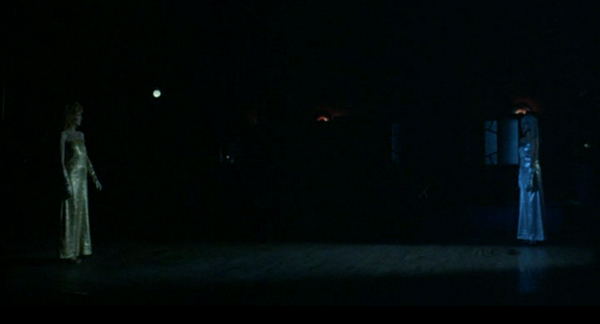 Labelled the second feature in [Jacques] Rivette’s four-part Scènes de la Vie Parallèle, Duelle is in fact the first to be completed. Like all the films in the projected series, it covers the ‘Carnival’ period between the last new moon of winter and the first full moon of spring: the only time when goddesses can appear on earth and have commerce with mortals. These goddesses are split between moon ghosts and sun fairies; in Duelle, we find a ghost (Juliet Berto) and a fairy (Bulle Ogier) competing for possession of a diamond known as the Fairy Godmother which can keep them on earth past their allotted forty days.With a non-existent word (the female form of a masculine noun) as title and an imaginary muth as starting-point, Duelle deliberately defines itself through contradictions and clashes, maintaining a perpetual disequilibrium of elements that equally flirts with and refuses the comforting balances of ‘classic’ narrative.… Read more »