I can remember what it used to be like, living in New York ten years ago. New Godard movies and Beatles records were being consumed the moment they arrived, with the kind of impatient enthusiasm that must have greeted the latest installments of serialized Dickens novels when they hit the New York docks a century before.

During the same decade that saw the birth of the New Wave, our first glimpses through film of part of the Third World, the flowering of the North American avant-garde, and a corresponding leap forward in film criticism, one was witnessing the growth of a new kind of audience, a new cinema, and a new kind of thinking about movies that started from the bottom up.

From the looks of things, that bottom has dropped out. What has happened to this passionate complex of forces, this pluralism of tastes and possibilities? No film by Godard has been released in the U.S. since 1971, and the last movies by directors ranging from Jacques Tati, Robert Bresson, and Jacques Rivette to Chantal Akerman, Marguerite Duras, Jean-Marie Straub and Danièle Huillet remain undistributed. And we can see what’s happened to the legacy of the Beatles if we consider a typically cynical industry product like Sgt.… Read more »

Obscure Objects of Desire: A Jam Session on Non-Narrative

This appeared originally in Film Comment, July-August 1978, and was reprinted by Saul Symonds in March 2005, with separate new prefaces by myself (reproduced below) and David Ehrenstein, in the online Light Sleeper (which is no longer up, alas). It’s also reprinted in my recent book Cinematic Encounters: Interviews and Dialogues (2018). — J.R. 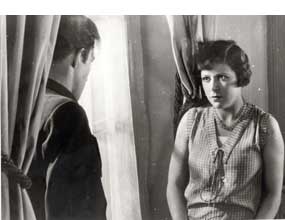 When this piece was written, or more precisely assembled, over 30 years ago, Ray Durgnat and I were sharing a house in Del Mar, California with experimental filmmaker Louis Hock. Ray and Louis were teaching film in the Visual Arts Department at the University of California, San Diego, where I had taught the previous year — having been coaxed by Manny Farber into leaving my job as assistant editor of Monthly Film Bulletin and staff writer of Sight and Sound in London, at the British Film Institute, and returning to the U.S. after almost eight years of living in Europe. Ray, already a friend, also came over from London to take my position when I wasn’t rehired, and I was starting to work on a book that eventually became Moving Places: A Life at the Movies (1980).… Read more »