My first meeting with Samuel Fuller is chronicled in this interview/essay published in the July 9, 1980 issue of The Soho News. Seven years later, while concluding my academic career at the University of California, Santa Barbara, where I was placed in charge of running the film studies summer school program, I was still crazy about Fuller, and invited him to serve as our “visiting artist”, which led to our becoming friends from that summer until his death a decade later. I did my best to try to capture his singular way of talking in this article. For my title, I’m using the headline on that issue’s front page, not the title given inside (“Sam Fuller Reshoots the War”). — J.R. 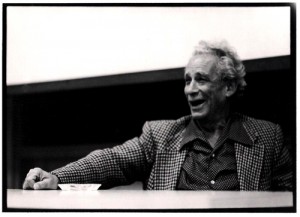 When I enter his suite at the plaza, he’s finishing lunch, expressing his regret about missing Godard at Cannes, remarking on the absurdity of prizes at film festivals, asking me what Soho News and Soho are. (The one he knows about is in London — he fondly recalls a cigar store on Frith Street.)

It isn’t hard to figure out why Mark Hamill affectionately calls him Yosemite Sam, or why Lee Marvin simply says he’s D.W. Griffith. Bursting with the same charismatic, comic-book energy that sky-rockets through most of his movies, old crime reporter, novelist, war hero, writer-director and sometime producer Samuel Fuller, almost 69, still moves and talks like his daffy action flicks — like the wild man from Borneo — in quick, short, blocky punches, like two-fisted slabs of socko headline type.… Read more »