From Sight and Sound, Summer 1986 and my 2007 collection Discovering Orson Welles. For the first half of this article, and a detailed account of how it came to be written, please go here.

In my synopsis of The Big Brass Ring, I erroneously identify Kim Meneker’s former lover as “a basket-case casualty from Vietnam” rather than from the Spanish Civil War. –- J.R. 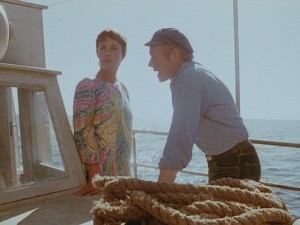 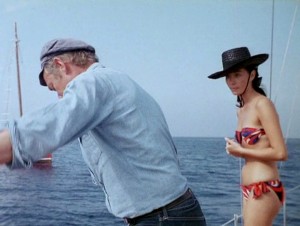 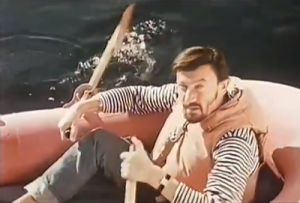 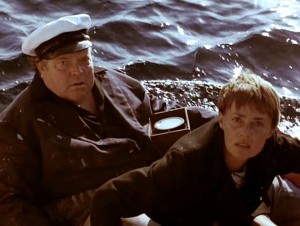 THE DEEP.
Not to be confused with Peter Yates’s 1977 feature of the same title, this adaptation of Charles Williams’s thriller Dead Calm, scripted by Welles, was shot in color off the Dalmatian coast at Hvar, Yugoslavia, between 1967 and 1969, with Welles, Laurence Harvey, Jeanne Moreau, Oja Kodar and Michael Bryant. Most of this film was shot and edited, but gaps remain due to the death of Laurence Harvey in 1973 and the still undubbed part of Jeanne Moreau. Welles, Kodar and others have regarded this as the least of his features, so one imagines that it has a low priority on the list of works to be completed and/or released — although, as Kodar points out, priorities may change on any project if investment is forthcoming.

At the Rotterdam film festival last January, Kodar, Dominique Antoine and I compiled a 90-minute videotape of Wellesiana to be shown there, and among the clips we included was a two-minute trailer for The Deep — an early action sequence including brief glimpses of all five of the characters on two yachts and an effective use of percussive jazz (bass and drums) on the soundtrack.… Read more »

From Sight and Sound, Summer 1986 and my 2007 collection Discovering Orson Welles (the source of the following notes in italics as well).

I was living in Santa Barbara when Welles died on October 10, 1985, teaching
what I believe was the first of the three Welles courses I taught at the University of California, Santa Barbara, and lecturing on The Magnificent Ambersons  that same day. On November 2, I attended a lengthy Welles tribute held at the Directors Guild in Los Angeles, and recall sitting with a few other Welles fans, including Todd McCarthy and Joseph McBride, at a restaurant for many hours afterwards, holding what amounted to a kind of personal wake.

This wasn’t long after I’d managed to read and acquire xeroxed copies of two late, unrealized Welles screenplays, The Big Brass Ring and The Cradle Will Rock, and one of the idées fixes I had after his death was that both of them should be published, along with the Heart of Darkness script (another fixation that had persisted since the early 70s); if memory serves, I even wrote a letter soon after Welles’ death to Paola Mori, Welles’ widow, expressing this wish, but never got a response.… Read more »