Hitchcock lives! David Mamet’s first time out as a director is a thriller about compulsive behavior and con games, done with a sureness of touch and taste that shows a better understanding of Hitchcockian obsessions than the complete works of Brian De Palma. The viewer has to adjust to Mamet’s theatrical reflexes, which impart a certain strangeness to both the performances and the staging — such as confidential conversations held within earshot of characters who don’t hear them, because the conventions of theater space are employed rather than the usual conventions of filmic space. But once past this barrier, one is easily seduced by Mamet’s storytelling gifts, which deliver a shapely script (developed with Jonathan Katz), full of its own con games and compulsions, with an adroit grasp of emphasis and pacing. Lindsay Crouse (Mamet’s wife) plays a successful upper-crust psychiatrist and author whose feelings of frustration in treating her criminally involved patients goad her into a walk on the wild side, beginning with the eponymous gambling den, with Joe Mantegna as her guide. Apart from uniformly fine performances — with Mike Nussbaum, Lilia Skala, and J.T. Walsh among the major secondary parts — the film has striking hard-edged photography by Juan Ruiz Anchia, and a good score by Alaric Jans that nimbly integrates a Bach fugue. (Fine Arts) (JR) 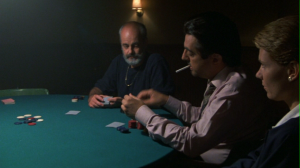