Conceivably the best and most serious Dickens adaptation ever filmed, Christine Edzard’s two-part, six-hour English movie tells the story as the novel does, from two consecutive points of view. Perhaps the greatest strength of the picture is its remarkably dense rendering of 19th-century England; no single art director or production designer is credited, but the use of sets is especially fine. Derek Jacobi, Alec Guinness, Joan Greenwood, Roshan Seth, Cyril Cusack, and Sarah Pickering in the title role head a uniformly distinguished cast. This is a far cry from the polished competence of Masterpiece Theatre; Edzard’s Dickensian universe is one that sweats as well as breathes. (Fine Arts)… Read more »

The Sound of German

From the Chicago Reader (December 2, 1988); also reprinted in my collection Essential Cinema. — J.R. 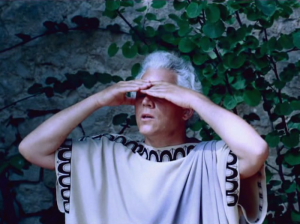 THE DEATH OF EMPEDOCLES

Directed and written by Jean-Marie Straub and Daniele Huillet 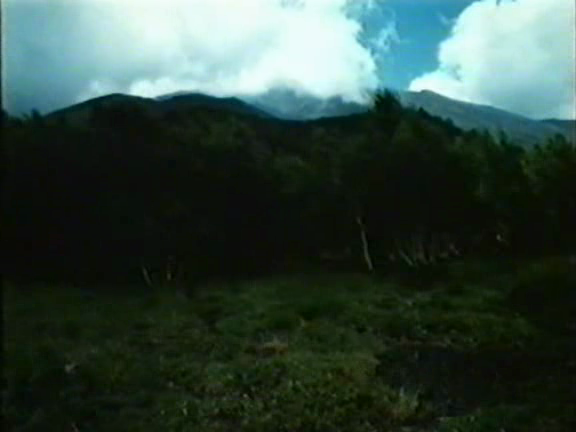 Three pretentious but relevant quotes: “Aesthetics are the ethics of the future” (Lenin). “To make a revolution also means to put back into place things that are very ancient but forgotten” (Charles Peguy). “When the Green of the Earth Will Shine Freshly for You” (Jean-Marie Straub and Daniele Huillet’s subtitle for The Death of Empedocles). 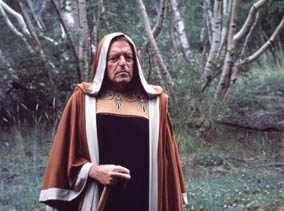 For spectators who don’t know what to do with their films, Jean-Marie Straub and Daniele Huillet offer a rigorous program that’s all work and no play — a grueling process of wrestling with intractable texts, often in languages that one doesn’t understand, without the interest provided by easy-to-read characters or compelling plots. But in fact every one of Straub-Huillet’s 15 films to date (10 features and 5 shorts) offers an arena of play as well as work, and opportunities for sensual enjoyment as well as analytical reflection. To find this arena of play and pleasure, one has to go beyond what we usually associate with the enjoyment of culture–beyond parameters that are usually limited by mutually exclusive notions of “art,” “entertainment,” “education,” and “scholarship,” notions that generally make us smile or groan in advance, regardless of what is placed in front of us.… Read more »

This provocative, grim Australian adventure thriller, attractively shot in ‘Scope–written by Mac Gudgeon and Jan Sardi, and directed by Michael Pattinson and Bruce Myles–concerns the atomic bomb tests conducted by the British government on the Australian mainland between 1953 and 1964, and their disquieting aftereffects. A professional cameraman (Colin Friels) discovers that the death of his cameraman father in 1953 was not accidental, as he supposed, and most of the film focuses on his quest for the telltale footage shot by his father that led to his murder. Charges that thousands of aborigines died because of the tests, the unearthing of a radioactive World War II jet bomber, and the theft of home movies from the hero’s flat all become part of the disturbing mystery, much of it based on fact. With Donald Pleasence, Jack Thompson, and Natalie Bate. (Hillside Mall)… Read more »

Even if you’ve seen its predecessor, the plot of this gory horror movie is so incoherent that it’s not worth trying to figure out. Indeed, apart from a few stylish, M.C. Escher-influenced touches in Mike Buchanan’s production design, the only possible appeal of this adaptation by Peter Atkins of a Clive Barker story, directed by newcomer Tony Randel, is to fans of torture, gratuitous four-letter words, and immoderate amounts of blood. With Clare Higgins, Ashley Laurence, Kenneth Cranham, and Imogen Boorman. (JR)… Read more »

My Stepmother Is An Alien

Widower scientist Dan Aykroyd sends out radar signals to another galaxy, and alien Kim Basinger turns up to try to elicit more of the same. Written by many hands (Jerico and Herschel Weingrod, Timothy Harris, and Jonathan Reynolds), and directed by Richard Benjamin, this is an inordinately silly comedy that manages to be pretty likable if one can get past some of its harebrained premises (such as requiring Basinger to be simultaneously a member of a highly advanced civilization and a typical dumb blond). The movie pilfers from so many sources that it comes across as sub-Ron Howard as well as sub-Spielberg (Basinger essentially plays the Daryl Hannah part in Splash), but it’s interesting to discover that Basinger registers more effectively on-screen when exploited for her unreality, like Marilyn Monroe, than as a real person, as in Nadine. Alyson Hannigan plays Aykroyd’s 13-year-old daughter, and Jon Lovitz plays his brother. (JR)… Read more »

Conceivably the best and most serious Dickens adaptation ever filmed, Christine Edzard’s two-part, six-hour English movie tells the story as the novel does, from two separate points of view. Perhaps the greatest strength of the picture is its remarkably dense rendering of 19th-century England; no single art director or production designer is credited, but the use of sets is especially fine. Derek Jacobi, Alec Guinness, Joan Greenwood, Roshan Seth, Cyril Cusack, and Sarah Pickering in the title role head a uniformly distinguished cast. This is a far cry from the polished competence of Masterpiece Theatre; although Garry Wills has argued that this adaptation eliminates the novel’s revolutionary content, Edzard’s Dickensian universe is one that sweats as well as breathes. (JR)… Read more »

Keenen Ivory Wayans wrote, directed, and plays hero Jake Spade in this 1988 parody of blaxploitation movies. In many respects this is a black counterpart to The Naked Gun, and very nearly as funny; the bounty of antimacho gags is both unexpected and refreshing. With Bernie Casey, Antonio Fargas, Isaac Hayes, Dawnn Lewis, and John Vernon. R, 87 min. (JR)… Read more »

The Cabinet Of Dr. Caligari

Robert Wiene’s groundbreaking 1919 silent, the most famous and influential work of the German expressionist cinema, involves a mad doctor (Werner Krauss) and the somnambulist who does his bidding (Conrad Veidt). Aided and abetted by one of Carl Mayer’s best scripts and remarkable, distorted sets painted by Hermann Warm, Walter R… Read more »

Sincere but mawkish, this drama about the dangers of cocaine and downers seems to aspire to the seriousness of Days of Wine and Roses, but thanks to choppy continuity, it often comes closer to Reefer Madness. James Woods and Sean Young star as a couple who move from New York to Los Angeles to live life in the fast lane; part of the problem is that the script seems to want us to accept Woods (a frenetic real estate hustler) as normal before drugs intervene. Darryl Ponicsan’s script adapts Benjamin Stein’s book Ludes; Harold Becker directed, and the secondary cast includes John Kapelos, Steven Hill, Kelle Kerr, and John Rothman. (JR)… Read more »

Set mainly in and around a lakeside establishment called the Blue Water Grill in Texas, this is a small film, but within its own terms a delightful and virtually perfect one. The characters–the dreamy grill owner (Gene Hackman), who compulsively watches home movies of his long-vanished wife; his grumpy yet serene father-in-law (Burgess Meredith); a slightly retarded handyman (Elias Kotias); and a bus driver (Teri Garr) who has her sights set on the grill owner–all seem to come out of Erskine Caldwell and Tennessee Williams, but Bill Bozzone’s capable script, Peter Masterson’s deft direction, and Fred Murphy’s handsome photography all show them off to best advantage, and the movie’s playlike story moves effortlessly. Funny and appealing, this is the kind of quiet and assured Hollywood movie that used to be more common in the 50s; the local flavor is caught perfectly, and every member of the cast shines. (Deerbrook, Ridge, Golf Glen, McClurg Court, Oakbrook, Plaza)… Read more »

The Land Before Time

Ironically, it is this Spielberg-Lucas collaboration–directed by Don Bluth, and scripted by Stu Krieger, Judy Freudberg, and Tony Geiss–not the Disney studio’s new Oliver & Company, that comes closest to reviving the classic character animation of Disney in its heyday. In this case, what we get is a kind of dinosaur Bambi featuring an all-prehistoric cast. It’s a tale about growing up as well as an adventure about a trek for survival. Reportedly, Spielberg found the original version of this too scary and violent, requiring expensive changes, and it must be admitted that some of the action sequences feel abbreviated–but the overall handling of landscape and character is well done, and some of the old Disney mysticism about parental and ancestral roots manages to shine through. Not a masterpiece, but a nicely crafted piece of animation. (Biograph, Chicago Ridge, Edens, Nortown, Orland Square, Ridge, Water Tower, Woodfield, Ford City East, Yorktown, Hillside Square, Norridge)… Read more »

Perhaps the most striking instance of a suppressed Soviet film thawed out by glasnost, this 1967 first feature by Aleksandr Askoldov was apparently controversial only because it expresses overt sympathy for the Jews who were persecuted during the Russian civil war, and because the lead character is a pregnant woman whose combined characteristics challenged traditional stereotypes. As a first feature, the film is in many respects remarkable, if not an unqualified success. The black-and-white ‘Scope images are often clearly influenced by the silent Soviet masters, and the uses of subjective camera are especially striking; but the film’s effectiveness as narrative only works intermittently. Still, for anyone with an interest in the subject and in the Soviet cinema, this shouldn’t be missed. (Facets Multimedia Center, 1517 W. Fullerton, Friday and Saturday, November 18 and 19, 6:45 and 9:00; Sunday, November 20, 5:00 and 7:30; and Monday through Thursday, November 21 through 24, 6:45 and 9:00; 281-4114)… Read more »

The Year My Voice Broke

An Australian memory piece written and directed by John Duigan, set in New South Wales in 1962. Danny (Noah Taylor), a teenager, has an obsessive crush on Freya (Loene Carmen), an older childhood friend, and when she starts to become romantically involved with Trevor (Ben Mendlesohn), his loyalty is put to the test. Although most of this is rather familiar stuff, even in a small-town Australian setting, the treatment is sufficiently sincere and nuanced to give it a touch of poignancy; the overall modesty and sweetness of the performances help. Note: This film sneaked in last week before we had a chance to recommend it, and will be gone after these last screenings. (Fine Arts, matinees, Friday and Saturday, November 11 and 12)… Read more »

Hoxsey: How Healing Becomes a Crime

A fascinating documentary by Ken Ausubel that starts off as provocative muckraking and winds up as an informative and thoughtful essay. The muckraking concerns former coal miner Harry Hoxsey and his virtually lifelong battle with the American Medical Association about his apparently effective folk remedies for cancer. The AMA and the U.S. government essentially outlawed Hoxsey’s practice in the U.S., but his remedies are still used today in a clinic in Tijuana. The essay, more historical in nature, concerns the ongoing battle between the “established” medical profession as we know it today and the alternative practices of folk medicine. Along the way are some fascinating glimpses into the profitable aspects for doctors of conventional cancer treatment and the ambiguities about Hoxsey’s controversial and still scientifically untested methods (Hoxsey himself ultimately died of cancer). (Chicago Filmmakers, 1229 W. Belmont, Friday and Saturday, November 11 and 12, 8:00; Sunday, November 13, 1:00, 2:30, and 4:00; and Monday through Thursday, November 14 through 17, 6:00 and 8:00; 281-8788).… Read more »