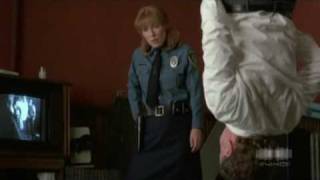 Whether or not this goofy black comedy is a total “success” is debatable, but you’ve got to admit it’s pretty different from anything else around. Postmodern comic magicians Penn Jillette and Teller play themselves in a script of their own devising that is deftly delivered by director Arthur Penn (Bonnie and Clyde, Night Moves). After Jillette brazenly announces on national TV that his life would be more exciting if someone tried to kill him, a bizarre series of murder attempts ensues during an engagement in Atlantic City, but it becomes increasingly difficult to determine who’s pulling the strings. Deconstructing illusion, Penn and Teller’s stock in trade, becomes the modus operandi of the plot — like a farcical version of House of Games, with heaps of good-natured gore added and a literally unbelievable grand finale — and the dynamic duo make the most of it. With Caitlin Clarke, David Patrick Kelly, Leonardo Cimino, and Celia McGuire. (Biograph) 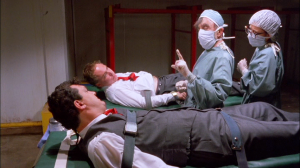