Romance of the Ordinary [on Chantal Akerman]

This was written for the January 26, 1990 issue of the Chicago Reader, a good five years before the premiere of at least one of my absolute favorite Akerman films: her non-fictional From the East (see the first photograph below; just below that is a smaller still from her subsequent From the Other Side in 2002, which isn’t exactly chopped liver either ). But in fact there have been many high points and wonders from Akerman since then, and I’m thrilled that one of her most recent projects is an adaptation of Joseph Conrad’s first novel, with a script cowritten by my friend Nicole Brenez. — J.R. 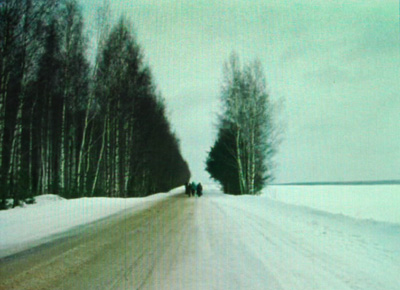 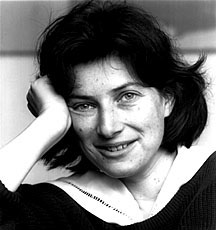 THE FILMS OF CHANTAL AKERMAN

On one hand, the films of the 39-year-old Belgian filmmaker Chantal Akerman are about as varied as anyone could wish. Some are in 16-millimeter and some are in 35; some are narrative and some are nonnarrative; the running times range from 11 minutes to 205. The genres range from autobiography to personal psychodrama to domestic drama to comedy to musical to documentary to feature-in-progress — a span that still fails to include a silent, not-exactly-documentary study of a run-down New York hotel (Hotel Monterey), a vast collection of miniplots covering a single night in a city (Toute une nuit), and a feature-length string of Jewish jokes recited by immigrants in Brooklyn exteriors (Food, Family and Philosophy), among other oddities.… Read more »

Jim Jarmusch’s fourth feature gives us three separate stories occurring over the same day in a sleazy section of Memphis: “Far From Yokohama,” about the visit of a young Japanese couple (Youki Kudoh and Masatoshi Nagase) to the shrines of their demigods, Elvis Presley and Carl Perkins respectively; “A Ghost,” about an Italian woman (Nicoletta Braschi) whose husband has just died on their honeymoon, who shares a hotel room with an American woman (Elizabeth Bracco) who has just left her English boyfriend, and who glimpses the ghost of Elvis himself; and “Lost in Space,” about the grief of the English boyfriend (Joe Strummer) alluded to in part two, who hangs out with two buddies (Rick Aviles and Steve Buscemi) and shoots a clerk in a liquor store. All three stories gravitate toward the same locations, including a rundown hotel presided over by night clerk Screamin’ Jay Hawkins and bellboy Cinque Lee, and Jarmusch gets a lot of mileage out of the formal satisfactions to be found as the three separate stories periodically pass over the same places and moments in time. There’s also some thoughtful work in the selective color of Robby Muller’s cinematography, and a great deal of the wit, poetry, and sensitivity to character that made Jarmusch’s Stranger Than Paradise and Down by Law so appealing.… Read more »