This first feature by Senegalese director Djibril Diop Mambety is one of the greatest of all African films and almost certainly the most experimental. Beautifully shot and strikingly conceived, it follows the comic misadventures of a young motorcyclist and former herdsman (Magaye Niang) who gets involved in petty crimes in Dakar during an attempt to escape to Paris with the woman he loves (Mareme Niang). The title translates as “hyena’s voyage,” and among the things that make this film so interesting stylistically are the fantasy sequences involving the couple’s projected images of themselves in Paris and elsewhere (1973). Cosponsored by Blacklight. (Univ. of Chicago, 1212 E. 59th St., Sunday, April 28, 5:00, 702-8575) … Read more »

The Comedy of Money

Even this minor film from Max Ophuls has so much energy it makes the major work of figures like Spielberg and De Palma shrink to virtual nothingness. Ophuls was effectively imported to the Netherlands to make this 1936 feature to help beef up the lackluster Dutch film industry. Based on an original Ophuls story (and coscripted by Walter Schlee, Alex de Haan, and Christine van Meeteren) and featuring songs and commentary from a neo-Brechtian clown who stands outside the plot, the film describes the misadventures of a bank courier (Herman Bouber) who is robbed of bank funds and fired, only to be appointed as head of a finance company by crooked businessmen who believes that he has the stolen money. Rather light and on the cutesy side as narrative, this comedy is worth seeing mainly for the inventive mise en scene (with the great Eugen Schufftan as cinematographer); it’s full of unexpected camera angles and Ophuls’s usual delight in camera movement (watch for an especially giddy dream sequence). With Rini Otte and Cor Ruys. (Film Center, Art Institute, Columbus Drive at Jackson, Thursday, May 2, 6:00, 443-3737) … Read more » 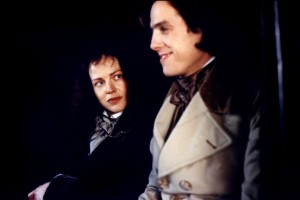 A delightful if fanciful treatment (1991) of the events leading up to the romance between assertive George Sand (Judy Davis) and prudish Frederic Chopin (Hugh Grant) — roughly from 1836 to 1838 — that also involves such artists as Alfred de Musset (Mandy Patinkin), Franz Liszt (Julian Sands), and Eugene Delacroix (Ralph Brown), as well as Liszt’s lover and Sand’s friend Marie d’Agoult (Bernadette Peters) and Sand’s former lover Felicien Mallefille (Georges Corraface), a tutor to her children. James Lapine, best known as the director and librettist of Stephen Sondheim’s Sunday in the Park With George and Into the Woods, fluidly directs a lively script by his wife Sarah Kernochan, and a generous number of piano pieces by Chopin and Liszt are smoothly integrated into the story. Especially good in the cast are Davis (adept in translating Sand’s boldness in dress and manner into body language) and Anna Massey as her mother. PG-13, 108 min. (JR) 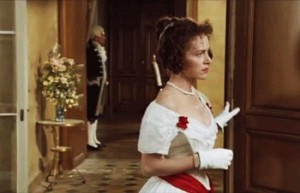 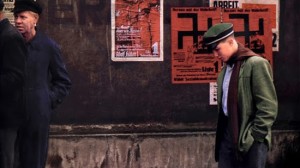 It’s a pity that Jerry Schatzberg’s most recent picture — and one of his very best — has had to wait two years for its Chicago premiere. Adapted by Harold Pinter from a novel by Fred Uhlman, and shot in ‘Scope by Bruno De Keyzer, this French-English-West German production is a story about a Jewish lawyer in New York (Jason Robards) who’s returning to Stuttgart, Germany, after a 55-year absence to discover what happened during the early 30s to his best friend (Samuel West) — an ambassador’s son who didn’t share the racism of his aristocratic family. Most of the story is told in flashback (Christien Anholt plays the hero as a youth), and much of what’s impressive about its unfolding is the meticulous re-creation of Germany during the rise of Nazism (the superb production design is by the great Alexandre Trauner, who appears in a cameo in a warehouse office), as well as a sensitive (and perhaps timely) depiction of how the gradual changes in national thinking were reflected in everyday life. It’s a story that’s been told before, but seldom with such feeling for detail and nuance; one has to adjust to the curious mix between English dialogue and street signs in German, but the performances — including those by Francoise Fabian, Maureen Kerwin, Barbara Jefford, and Bert Parnaby in small parts — are impeccable (1989).… Read more »

A genuine oddity from 1963 Czechoslovakia, long banned because of its satirical and antiauthoritarian tendencies, this fantasy in ‘Scope and color by Vojtech Jasny describes what happens when a magic show featuring a cat with a pair of eyeglasses turns up in a fairy-tale town. When the eyeglasses are removed, people are obliged to show their “true colors”–folks in love turn red, liars purple, thieves gray, betrayers yellow and the local schoolchildren see through the duplicity of the adults for the first time. To complicate matters, the magic show and cat are described in advance by a salty local layabout (Jan Werich) who serves as a sort of narrative equivalent to the stage manager in Our Town and who entertains schoolchildren with his tales while serving as their art-class model; when the magic show and cat arrive in the town, the magician is played by the same actor. Whimsical, likable, and inventive, if never wholly successful, this colorful cross between the Pied Piper and Bye Bye Birdie qualifies as one of the best early examples of the Czech New Wave; significantly, Ivan Passer worked on it as an assistant. Also known as That Cat… and One Day a Cat; with Vlastimil Brodsky and Jirina Bohdalova.… Read more »

A womanizing male chauvinist (Perry King) is killed by three of his former conquests, reincarnated in the body of a woman (Ellen Barkin), and told he can enter heaven if he can find one female who likes him. Writer-director Blake Edwards in a burned-out mode seems so taken with this rickety concept that he hasn’t bothered to flesh it out with characters or much of a plot; it’s merely a soapbox from which he can deliver a few would-be feminist gibes. Ellen Barkin copes resourcefully with the limited material, but the rest of the cast — Jimmy Smits, JoBeth Williams, and Lorraine Bracco — is left high and dry (1991). (JR)… Read more »

Superstar: The Life And Times Of Andy Warhol

Chuck Workman’s entertaining 1990 documentary about Andy Warhol disappoints only if you’re looking for something more than a good, breezy account of the life and times of Warhol, as well as the scene and mystique — don’t expect much information about or insight into the specifics of his art, his filmmaking, or his intelligence. Among the many people interviewed are Bob Colacello, Henry Geldzahler, Dennis Hopper, Sally Kirkland, Fran Leibowitz, Roy Lichtenstein, Gerard Malanga, Taylor Mead, Sylvia Miles, Bobby Short, Ultra Violet, Viva, and Holly Woodlawn, as well as several members of Warhol’s family. (JR)

Also known by the French title Paris vu par . . . , this is probably the best of the French New Wave sketch films (1964). Six directors are assigned separate sections of Paris, and each sketch is shot in 16-millimeter. The most powerful episodes are those by Jean Rouch (one of his few purely fictional works, shot documentary style in only one or two takes and costarring the future director of Reversal of Fortune, Barbet Schroeder) and Claude Chabrol (a convulsive bourgeois family melodrama featuring Chabrol himself and his then-wife Stephane Audran). Eric Rohmer contributes a mordant and well-crafted story set around l’Etoile, and the interesting if uneven Jean-Daniel Pollet, whose other films are woefully unavailable in the U.S., is represented by a bittersweet comic short starring the Harry Langdon-like Claude Melki. Jean Douchet (best known as a Cahiers du Cinema critic) offers a fairly undistinguished depiction of a Left Bank seduction, and Jean-Luc Godard presents a more detailed version of a story told in his feature A Woman Is a Woman, shot by Albert Maysles and starring Joanna Shimkus. Like most sketch films, this is patchy, but the Rouch, Chabrol, and Rohmer segments shouldn’t be missed. (JR)… Read more »

Not the Kevin Costner feature or the Alain Delon Mafia thriller, but a much better movieJoseph L. Mankiewicz’s hard-hitting, action-packed 1950 melodrama about a young black doctor (Sidney Poitier in his film debut) and a white gangster (Richard Widmark) who provokes a race riot after Poitier fails to save his brother’s life. Made long before such a theme was fashionable in Hollywood, this benefits from Mankiewicz’s flair for snappy dialogue and strong performances by the leads and secondary cast, which includes Linda Darnell, Stephen McNally, Ruby Dee, and Ossie Davis. 106 min. (JR)… Read more »

Night Of The Ghouls

Edward D. Wood Jr.’s 1960 follow-up to Plan 9 From Outer Space is a grade-Z effort about the walking dead featuring Kenne Duncan (a stunt man in serials), Valda Hansen, and Tor Johnson. The film remained in the lab for 23 years because Wood couldn’t afford to pay for the processing. Also known as Revenge of the Dead. 69 min. (JR)… Read more »

This peculiar 1949 thriller by Otto Preminger about a kleptomaniac (Gene Tierney) under the control of a Mabuse-like hypnotist (Jose Ferrer) hasn’t much of a reputation in America, and the acting (which includes Richard Conte as Tierney’s psychoanalyst husband) and cornball script (by Andrew Solt and Ben Hecht hiding under a pseudonym) help explain why. But the French enthusiasm for this moody and creepy melodrama, sparked mainly by Jacques Rivette and Jean-Luc Godard, isn’t without defenses: Preminger’s ambiguous relation to his characters and his sense of moral relativity have seldom been put to such haunting use. Based on a Guy Endore novel; with Charles Bickford, Constance Collier, and Fortunio Bonanova. 97 min. (JR)… Read more »

Where The Sidewalk Ends

The last of Otto Preminger’s studio pictures at Fox, this 1950 feature has many of the noirish qualities of Laura and Fallen Angel: Dana Andrews, ambiguity about the characters’ dark undertones, and a fluid, fascinating mise en scene. Andrews plays a brutal New York cop who accidentally kills someone while investigating a murder and then proceeds to cover his tracks. Ben Hecht, writing under a pseudonym, adapted William Stuart’s novel Night Cry; Gene Tierney, Gary Merrill, and Karl Malden costar. 95 min. (JR)… Read more »

Up Against The Wall

A 14-year-old inner-city kid (Catero Alain Colbert) enters a good school in the suburbs, but gets into trouble when he decides to live with his older, drug-dealing brother (Stoney Jackson), encounters racism from a white member of his running team, and becomes involved with a classmate (Sallie Richardson) who gets exasperated with his lack of sexual experience. Other surprises are in store in this sincere and well-intentioned if flawed locally made independent featurewhich also features director Ron O’Neal, Oscar Brown Jr. (especially good and likable as the school coach), and L. Scott Caldwell in central rolesbut the naivete of the hero is so extreme that it may exasperate the spectator as well. Based on a story by executive producer Dr. Jawanza Kunjufu and scripted by Emma Young, Songodina Ifatunji, and Chuck and Zuindi Colbert. (JR)… Read more »

A principled yuppie (James Spader) and an unprincipled upstart (John Cusack) become roommates and best friends at the University of Virginia’s law school in 1983, and eventually lock horns in Washington after the upstart pursues a political career and the yuppie goes in pursuit of justice. It’s questionable whether Kevin Wade’s muddled script would have carried much conviction under any circumstances, but the fatal miscasting of the two leads kills off any believability at the outset, and neither director Herbert Ross nor composer Trevor Jones (who contributes an aggressively bland score) can add enough punch to distract one from the overall incoherence. It’s nice, however, to see Richard Widmark back in gritty style as a wily senator. With Imogen Stubbs and Mandy Patinkin. (JR)… Read more »