A potent and highly engrossing documentary by Joe Berlinger and Bruce Sinofsky about a 1990 murder trial in New York State that attracted national media attention. The case involved the death of one of the four illiterate Ward brothers, all reclusive and eccentric bachelors who inhabited a two-room shack without running water on their dairy farm. Bill was found dead in the bed he shared with Delbert, who confessed the same day to suffocating his ailing brother in a mercy killing, but later retracted his confession and implied he was being framed. It’s amazing how many primal issues are engaged in this real-life mystery story, and Berlinger and Sinofsky, who contrived to follow the story from start to finish, do a superb job of keeping us on the edge of our seats (1992). Music Box, Friday through Thursday, March 26 through April 1.… Read more »

Ken Loach, perhaps the last unreconstructed English realist (Kes, Family Life), takes a funky, intermittently comic, but generally uncompromisingly grim look at a group of men on a London building crew, placing particular emphasis on a young man from Glasgow (Robert Carlyle) and his affair with an aspiring singer (Emer McCourt). Shot on an actual building site complete with rats, with actors experienced in construction, and written by the late Bill Jesse, a former laborer himself, this film has a gritty authenticity about English working-class life that makes even Mike Leigh seem like a bit of an artificer (1991). Music Box, Friday through Thursday, March 19 through 25.… Read more »

Damned in the USA

Paul Yule’s simple talking-head documentary, made for England’s Channel Four in 1991, was attacked in court by the Reverend Donald Wildmon, who called it “blasphemous and obscene”; Wildmon unsuccessfully tried to get it barred from the U.S. and sued the film’s producers for $8 million, which is why it’s a little late reaching us. The film is supposedly lethal because it presents both sides of the recent art-censorship debates and actually lets us see the contested Robert Mapplethorpe photographs and Andres Serrano’s Piss Christ, hear the 2 Live Crew music, and then make up our own minds. What it doesn’t do, alas, is present both sides of the debate on federal arts funding–an understandable omission considering the English audience the film was originally made for, like most audiences in the world, values art and education enough to dismiss out of hand the “con” position as it’s routinely expressed in this country, which usually defines federal support of business as “freedom” and federal support of art as “enslavement,” without worrying about who’s being freed and who’s being enslaved. (Only in America, it seems, can such a debate happily ignore what the rest of the world thinks about the subject.) Without being especially brilliant or original, this film remains compulsively watchable simply because it clarifies what people are attempting to do to limit some of our cultural choices.… Read more »

A Far Off Place

Mikael Salomon, the cinematographer on The Abyss and Far and Away, directs his first feature (for Disney), and it’s a creditable job–an effective adventure story about two recently orphaned teenagers (Reese Witherspoon and Ethan Randall) fleeing from the ivory poachers who killed their parents and crossing the Kalahari Desert with the help of a young bushman (Sarel Bok). Adapted by Robert Caswell, Jonathan Hensleigh, and Sally Robinson from two books by Laurens van der Post, the film has a nice feeling for the terrain (shooting was done in Zimbabwe) as well as for the (mainly unstereotypical) characters. With Jack Thompson and Maximilian Schell. On the same program, a formulaic and predictably hysterical Roger Rabbit and Baby Herman cartoon, Trail Mix-Up. (Lincoln Village, Water Tower, Ford City, Evanston, Norridge, Webster Place)… Read more » 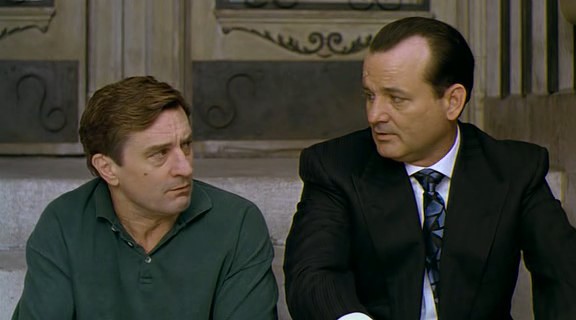 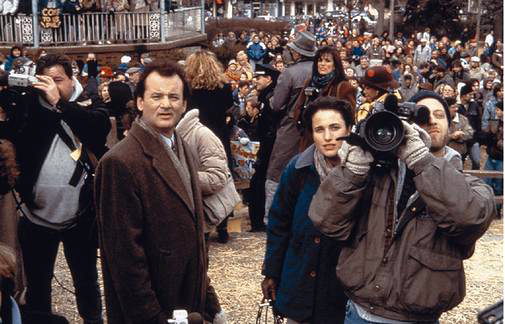 Written by Danny Rubin and Ramis 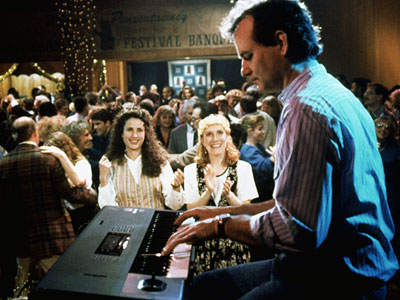 As far as the mainstream is concerned, Martin Scorsese and Robert De Niro are beacons of artistic integrity and originality, while Harold Ramis and Bill Murray are at best unpretentious entertainers; screenwriter Richard Price (The Color of Money, Sea of Love) is a respected pro, and director John McNaughton (Henry: Portrait of a Serial Killer, The Borrower) is a promising maverick. But all of these assumptions are challenged in one way or another by the two latest Bill Murray movies. In Price and McNaughton’s Mad Dog and Glory, produced by Scorsese, artistic integrity, originality, craft, daring, and promise seem in shorter supply than in Ramis’s Groundhog Day.

I may be oversimplifying certain issues here. Groundhog Day, which boasts no interesting characters, is held in place by a narrative premise so shopworn — big-city grouch discovers small-town virtues and the error of his ways — that merely thinking about it makes me want to doze off.

After a long and successful career in day care, Ruby L. Oliver made this, her first feature, originally known as Leola, in her late 40s. It’s a remarkable debut: assured, tightly focused, surprisingly upbeat considering the number of problems it addresses without flinching–and the best low-budget Chicago independent feature I’ve seen. Set in contemporary Chicago, it concerns a 17-year-old girl from the ghetto whose plans for the future are jeopardized when she finds herself pregnant. In addition, her brothers are gradually drifting into a life of crime, her mother is having difficulty maintaining a day care center without a license, and her stepfather is an alcoholic and philanderer. The plot line is concentrated and purposeful, and the cast–including Carol E. Hall, Audrey Morgan (particularly impressive as the mother), Earnest Rayford, Andre Robinson, and Kearo Johnsonis uniformly fine. In addition to writing, directing, producing, and financing the film, Oliver is also credited with casting, served as set decorator and location manager, and sang as well as wrote the lyrics to the film’s theme song (1989). (Chestnut Station)… Read more »

A Home At The End Of The World

Michael Cunningham (The Hours) adapts his own novel about boys growing up as intimate friends in a suburb of Cleveland and sharing their lives with a free-spirited woman in New York and elsewhere. The sweetness of these very post-60s characters and their interactions periodically suggests the bohemian euphoria of Jules and Jim, albeit with more pronounced homoeroticism. The cast (Colin Farrell, Robin Wright Penn, Dallas Roberts) is good and the story affecting, though at times Michael Mayer’s direction makes the production seem a little choked up over its own enlightenment. Sissy Spacek is memorable in a secondary role. R, 95 min. (JR)… Read more »

This watchable and well-made feature debut by American independent writer-director Joshua Marston is also very much a showcase for Catalina Sadino Moreno, who plays the eponymous lead with grit and energy. Maria is a fearless and attractive 17-year-old Colombian who leaves her job on a rose plantation to work as a drug mule. For $5,000 she swallows more than 60 rubber pellets of heroin, to be reclaimed from her stool after flying to New Jersey; should a pellet break internally, death will quickly ensue. The depiction of her risky voyage and what happens afterward is highly suspenseful and entirely believable. R, 101 min. (JR)… Read more »

Robert Greenwald’s documentary charges the Fox News television network with biased and politicized news coverage, and presents some strong evidence for its position. Unfortunately, it also periodically stoops to the same sort of crass insults used by Fox, and doesn’t spend as much time tweaking its competitors as it might have. Still, its methodical unpacking of routine media abuses is long overdue, and one sign of its effectivenessfollowing a couple of weeks as the best-selling DVD on Amazonwas the sudden politeness of Bill O’Reilly to guests who disagreed with him. 77 min. (JR)… Read more »

A Night Of D.w. Griffith

Film scholar Tom Gunning hosts a program of early shorts by D.W. Griffith, including Rose O’Salem Town (1910) and The Massacre (1912). Gunning knows a great deal about Griffith and always has interesting things to say about him, so this should be a lively program. (JR)… Read more »

A whopping case of the greenhouse effect (or what I prefer to call Bush weather) melts the ice cores in Antarctica and floods Manhattan, which then freezes over; before long the disaster has nearly wiped out humanity as we know it (in other words, the U.S. and environs, though Canada is barely mentioned). Schlockmeister Roland Emmerich (Independence Day) has his usual field day with synthetic but enjoyable special effects and crosscutting between subplots (far fewer than usual). There are some fine ironic plot turns (Americans wind up in Mexican refugee camps, and the U.S. president declares, We were wrongI was wrong), but the story mainly hinges on whether ace climatologist Dennis Quaid can make up for his negligence as a father and get from Washington, D.C., to the New York Public Library before his son (Jake Gyllenhaal) and a few others run out of books to burn. All in all, good silly fun. With Ian Holm, Emmy Rossum, and Sela Ward. PG-13, 124 min. (JR)… Read more »

This German TV documentary by Helmut Grosse (2002, in English and subtitled German) offers a concise and lucid account of the multiple ties between the second Bush administration and the oil and energy industries, many of which date back to the president’s membership in the secret Skull and Bones Society at Yale. Some of the material is familiar and obvious, but Grosse makes a strong case for the disproportionate influence of Texas on the national agenda, and he defuses likely charges of Eurocentric bias by limiting his interviews to American experts. (JR)… Read more »

At a time when the new Argentinean cinema seems to be going through an unusually exciting and fertile period, the festival continues to select the most banal and conventional stuff imaginable from that country. This lachrymose and poorly acted Argentinian-Cuban coproduction (2003), about a Wall Street hotshot traveling to Havana to investigate his emigre roots, is distinctive only for its utter lack of distinction. Jorge Dyszel directed. In English and subtitled Spanish. 95 min. (JR)… Read more »

Orwell: Against The Tide

British documentarian Mark Littlewood stages scenes from George Orwell’s life, emphasizing his heroism during the Spanish Civil War, and from his fiction, including the torture of the hero in Nineteen Eighty-Four, with Orwell’s texts as voice-over. I’m sufficiently interested in the left-wing novelist and essayist to find any account of his life absorbing, but this 2003 film is so reductive that even I have to admit the same 54 minutes might be better spent reading or rereading his work. (JR)… Read more »

Dawn Of The Dead

Given the greatness of George Romero’s 1978 independently made classicin which cannibal zombies besiege a shopping mall where a clutch of still-human survivors is making its last standI feared what a studio remake of this apocalyptic thriller would be like. The new version has its share of disturbing moments, but writer James Gunn and director Zack Snyder have stripped away the social satire of the original and put little in its place. Sometimes the film seems a commentary on the ease with which humanity slips into barbarism, at other times a slip into barbarism itself. But if you leave when the end credits begin, you’ll miss further plot developments. With Sarah Polley, Ving Rhames, Jake Weber, and Mekhi Phifer. R, 90 min. (JR)… Read more »