A Great Day In Harlem 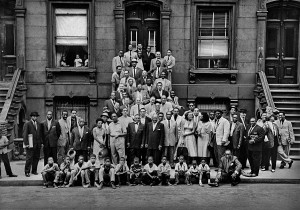 There are only a few great jazz documentaries, and each has a style all its own. This one-hour 1994 dissection of a 1958 group photograph of 57 key jazz musicians is special both as oral history and as a survey of the art. If you wanted to introduce someone to what jazz is all about, this would be an ideal place to start, a labor of love by jazz enthusiast and former Chicago journalist Jean Bach, who did an awesome job of tracking down the surviving participants in and witnesses to the picture taking, even locating some silent home-movie footage by bassist Milt Hinton and his wife. Included are elegant thumbnail profiles of such musicians as Lester Young, Jo Jones, Count Basie, Charles Mingus, Pee Wee Russell, Red Allen, Roy Eldridge, Horace Silver, Jimmy Rushing, Coleman Hawkins, Dicky Wells, and Stuff Smith, most of them offered by fellow musicians, along with samples of their music and comments on their placement in the photograph. (JR)

Steven Soderbergh’s remake of the classic noir thriller Criss Cross tells substantially the same story (a divorced couple who can’t let go of each other, an armored car heist that grows out of their deceptions after the avaricious woman marries a hood) but gives it such a different emphasis that it functions only fitfully as a thriller (chiefly in a dazzling hospital sequence near the end). What it unmistakably has is a feeling for the insecurity of contemporary relationships, an often ravishing visual style, some very funny crusty dialogue, and subtle and sensitive direction of actors (Peter Gallagher, newcomer Alison Elliott, William Fichtner, Anjanette Comer, Elisabeth Shue, Adam Trese, Joe Don Baker, and Paul Dooley, among others). This is a quirky personal effort with much of the humor and pain of Soderbergh’s earlier Sex, Lies, and Videotape and King of the Hill, though filtered through material that sometimes seems to engage the writer-director less fully; as partial compensation, the ‘Scope cinematography is stunning. (JR) 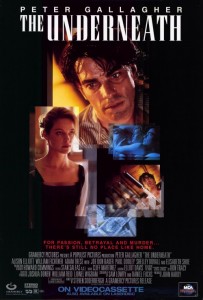 Burnt By The Sun

Trying to figure out why this interminable, hammy piece of Russian nostalgia by Nikita Mikhalkov (director, cowriter, associate producer, and star) won the Oscar for best foreign film of 1994 and the grand jury prize at Cannes, I came up with four hypotheses: (1) there are no Asians in it; (2) set over one long summer day in the country in 1936, it provides a wake-up call about the dangerously underhanded doings of Joseph Stalin; (3) the hero appears to be well over 60; and (4) the elegiac Chekhovian style recalls Ingmar Bergman by way of Woody Allen, thus making the film seem trebly familiar. Indeed, apart from intermittent bursts of Edouard Artemiev’s bombastic music, this 134-minute period piece offers the ideal opportunity for a long, peaceful snooze. With Oleg Menchikov, Ingeborga Dapkounaite, and Nadia Mikhalkov. In Russian with subtitles. (JR)… Read more »

A genuine oddity from 1935 Germanya musical-comedy version of a play by Plautus. Reinhold Sch… Read more »

A successful 35-year-old lesbian stand-up comic who’s been happily living for five years with an artist and gallery owner is thrown for a loop when a former close friend from high school and college turns up, husband in tow, and offers her a contract for a TV sitcom. The characters in Mindy Kaplan’s independent feature are quirky enough to seem real at first, and the generous samplings of the heroine’s stand-up routines make an interesting blend of fiction and performance. But the storytelling turns lugubrious, an arty flashback to what broke up the friendship seems mannered and contrived, and the limitations of this 123-minute feature become more apparent than the intelligence of certain details. With Jan Derbyshire, Kate Twa, Cindy Girling, Eileen Barrett, and Steve Adams. (JR)… Read more »

A visually striking if dramatically somewhat oblique look at a visionary girl’s struggle (ostensibly spiritual, but also clearly sexual and sensual) against the ruling powers in a 14th-century English villagea first feature directed by Chris Newby from a script by Judith Stanley-Smith and Christine Watkins (1993). The high-contrast black-and-white cinematography (by Michel Baudour) is stunning throughout, the acting is all competent or better, and the period ambience seems flawless, though a certain academic distance tends to limit our emotional involvement; what emerges is thoughtful, arresting, and interesting rather than gripping. (This was produced by the British Film Institute, and at times a theoretical rigor, suggestive of that organization’s education department, seems to hover over the proceedings.) Yet it’s an intelligent take on the Middle Ages, a far cry from the usual treatment, and well worth checking out. With Natalie Morse, Eugene Bervoets, Toyah Willcox, Peter Postlethwaite, and Christopher Eccleston. (JR)… Read more »

A kitschy if sincere Chicano family saga by Gregory Nava (El Norte), nicely shot by Ed Lachman, covering three generations in Los Angeles. Francis Ford Coppola is one of the executive producers, and the colorful sweep and the likable schmaltz both bear his stampthough an uncredited appropriation of Satyajit Ray’s The World of Apu in one of the major plot strands is also apparent. With Jimmy Smits, Esai Morales, Eduardo Lopez Rojas, Jenny Gago, Elpidia Carrillo, Constance Marie, and Edward James Olmos, who serves as narrator; producer Anna Thomas collaborated with Nava on the script. (JR)… Read more »

It’s not clear why Steven Spielberg’s Amblin decided to make a live-action entertainment starring the least interesting and most saccharine of all 50s cartoon characters, the friendly ghost who can’t help scaring people, but here’s your chance to shell out in search of an answer. Brad Silberling directed this 1993 feature from a script by Sherri Stoner and Deanna Oliver; the cast includes Christina Ricci, Bill Pullman, Cathy Moriarty, and Eric Idle. 100 min. (JR)… Read more »

Elvis Presley in 1961, just after the onset of his artistic slaveryonly three years before he’d wanted to star in The Defiant Ones with Sammy Davis Jr., but Colonel Parker signed him up to appear in stuff like this instead. This is supposed to be somewhat better than most Elvis films of the period because he sings Can’t Help Falling in Love. Angela Lansbury plays his mother; Norman Taurog directed. 101 min. (JR)… Read more »

Terry Zwigoff’s penetrating, thoughtful, and disturbing 1994 essay about the great underground comic artist Robert Crumb, best known for Fritz the Cat and Mr. Natural as well as his Keep On Truckin’ drawings, though also a semiprofessional musician and connoisseur of early jazz and blues. Made over a six-year period by a longtime friend and fellow musician, the film’s intimate, multifaceted portrait is exceptional in many respects. For starters, it presents Crumb not as a cartoonist but as an artist, plausibly described by critic Robert Hughes as the Brueghel of the second half of the 20th century. It then shows how difficult it is to assess artists, exploring in considerable depth Crumb’s dysfunctional family background, sexual obsessions, working methods, and political positions. By the end of two hours we’re persuaded that if Crumb weren’t drawing constantly and compulsively he’d probably be as doomed as his brothers Charles and Max, both of whom are also comic-book artists. Never letting his participants or his audience off the hook, Zwigoff traces Crumb’s ideological and psychological ambivalence toward his art through the perceptions of friends, acquaintances, relatives, former lovers, and Crumb himself. Zwigoff not only presents a complex human being and the range of his art but also guides us through a profound and unsettling consideration of what it means to be an American artist.… Read more »

Village Of The Damned

Director John Carpenter takes a nosedive in this remake of the 1960 English chiller, itself adapted from John Wyndham’s novel The Midwich Cuckoo. Much of the problem devolves from David Himmelstein’s script, not because it transplants Wyndham’s story of a group of children born with supernatural and telepathic powers to a small coastal village in California but because it represents both a considerable dumbing down and a hokey inflation of material that originally depended on mood and subtle suggestion for its effectiveness. Apart from a few shocks near the beginning, this version comes across as more harebrained than suggestive. With Christopher Reeve, Kirstie Alley, Linda Kozlowski, Michael Pare, Mark Hamill, and Meredith Salenger. (JR)… Read more »

Mario Van Peebles directs a script adapted by his father Melvin from the latter’s novel about the Black Panther movement, from its formation in Oakland in 1966 to its eventual destruction by the FBI in collaboration with organized crime; father and son coproduced (1995). The information here, much of it corresponding closely to the account of South Central Los Angeles in the 1994 video documentary The Fire This Time, is persuasive and compelling, though the drama and storytelling only intermittently do justice to it; MTV aesthetics tend to predominate, so that even grandiloquent crane shots for funerals are made to whiz by like fleeting attractions. But the sincerity of the project can’t be questioned, and much of the message gets across. With Kadeem Hardison, Marcus Chong (as Huey Newton), Courtney B. Vance (as Bobby Seale), Bokeem Woodbine, Joe Don Baker, Nefertiti, and Tyrin Turner. 124 min. (JR)… Read more »

An hour-long 1995 video documentary by Chicagoans Kate Kirtz and Nell Lundy about the women’s health collective Jane, whose members performed 12,000 safe but illegal abortions within the University of Chicago community between 1969 and 1973. The oral history that emergeswhich links this work to other political activities of the period even as it distinguishes it from themis a fascinating and important chronicle. The video is limited at times by the difficult task of representing events recounted in the interviews when appropriate footage isn’t available, but the overall story is indelible. (JR)… Read more »

Not John Ford at his best, but still full of interest, this somewhat dry-cleaned version of Jack Kirkland’s play adaptation of the famous Erskine Caldwell novel, scripted by Nunnally Johnson, offers a bittersweet view of Georgia hillbillies that doesn’t register fully as either comedy or drama (1941). Reportedly the same thing was true of the original play, which became a comedy only after audiences started laughing at it, but Ford benefits from this ambiguity by putting a wry spin on the populist humanism of The Grapes of Wrath, which he’d recently made for the same studio, Fox. With Charley Grapewin (repeating his stage role as Jeeter Lester), Marjorie Rambeau, Gene Tierney, William Tracy, Elizabeth Patterson, Dana Andrews, and Ward Bond. (JR)… Read more »

Peter Brook’s 1966 filming of one of his greatest stage productionsa Peter Weiss play based on the premise of the Marquis de Sade staging a play about the French Revolution in the Charenton asylumdoesn’t translate too well to the screen, especially when close-ups are expected to take the place of Brook’s multifaceted original mise en scene. The castincluding Ian Richardson, Patrick Magee, and Glenda Jackson (in her screen debut)is certainly skillful, but the compexity and originality of the work as originally conceived is basically missing. (JR)… Read more »