The second part of Satyajit Ray’s Apu trilogy, fully comprehensible on its own terms, suffers at times from its episodic plot, which follows Apu from the age of ten in the holy city of Benares to his early adulthood in Calcutta. But this is my favorite film in the trilogy, and the reported favorite of Ray’s fellow Bengali directors Ritwik Ghatak and Mrinal Sen. Its treatment of deathof Apu’s father toward the beginning of the film and of his mother near the endis among the most beautiful, mystical, and precise handlings of that subject in all of cinema, worthy of Mizoguchi; in a way the film is little more than a careful contextualizing of these two astonishing sequences. An adaptation of roughly the last fifth of Bibhutibhusan Banerjee’s novel Pather Panchali and the first third of his subsequent novel Aparajito, this benefits as much as the rest of the trilogy from the ravishing commentary of Ravi Shankar’s music. It’s a masterpiece for which terms like simplicity and profundity seem inadequate. In Bengali with subtitles. 113 min. (JR)… Read more »

Smell Of Camphor, Fragrance Of Jasmine

Iranian filmmaker Bahman Farmanara produced one of Abbas Kiarostami’s early features and won praise for his own work, including Prince Ehtejab (1974). But state officials began rejecting his film proposals in the mid-70s, and for much of the past 30 years he’s lived in the West. In this welcome comeback (2000) he plays a middle-aged director, rather like himself, who ruefully agrees to make a documentary about Iranian death rituals for Japanese TV. His wife has been dead five years (Farmanara’s wife, to whom he dedicated the film, was alive and well), and after discovering that their cemetery has planted someone else next to her, he has the strange experience of witnessing his own funeral, one of many fantasy sequences. This oddball comedy is full of wry asides and unexpected details; ultimately it’s more memorable for its ideas than its sounds and images, but it’s still fascinating and entertaining. In Farsi with subtitles. 93 min. (JR)… Read more »

The Stars Fell On Henrietta

Robert Duvall stars in a charming period piece as a solitary wildcat oilman in the Texas dust bowl during the mid-1930s in a picture produced by Clint Eastwood and directed by James Keach from a script by Philip Railsback. The plot is fairly conventional, but the period flavor is wonderful and the castwhich also includes Aidan Quinn, Frances Fisher, and Brian Dennehyis first-rate. (JR)… Read more »

I’ve only seen the first of these three films, Le Franca remarkable 47-minute narrative (1994) by the great Djibril Diop Mambety (Hyenas), about the misfortunes that befall a penniless musician who wins a lotterybut this alone makes the program well worth attending. The other two films are Mansour Sora Wade’s Picc Mi (1992) and Fary, l’Anesse (1989). In Wolof with subtitles. (JR)… Read more » 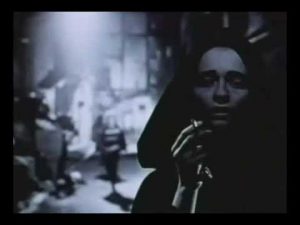 Dracula’s daughterand more specifically, Lambert Hillyer’s Dracula’s Daughter (1936) comes to Manhattan’s East Village in a quirky, lyrical independent feature by writer-director Michael Almereyda. It’s shot in luscious, shimmering black and white, with prismatic, pointillist interludes shot with a toy Pixelvision camera (also used by Almereyda in Another Girl, Another Planet, his previous feature), transferred to 35-millimeter without letterboxed framing. Produced by David Lynch, who turns up in a cameo, this offbeat horror item works much better as a dreamy mood piece with striking poetic images and as a semicomic appreciation of a few quintessential low-budget actors than as straight-ahead storytelling. In some ways it’s a throwback to the pathos of Twister, Almereyda’s first feature — a black comic treatment of various dysfunctional family members yearning for normality. With Elina Lowensohn, Martin Donovan, Peter Fonda, Galaxy Craze, Suzy Amis, Karl Geary, and Jared Harris. (JR)

I Am Self Sufficient

Nanni Moretti’s 1976 first feature, shot in Super-8 (later blown up to 16- and 35-millimeter) when he was 22, using his friends as cast and crew, shows that his style and personal manner were fully in place from the very beginning. Moretti himself plays the hero, a father whose marriage is coming apart and who is preparing a new production for an experimental theater group in Rome that proves to be a disaster. 95 min. (JR)… Read more »

The friendship between two assertive Jewish women in Paris from roughly the late 60s to the present is the subject of this 1994 feature by writer-director Martine Dugowson. The French mainstream is going through a sort of protracted Marjorie Morningstar phase when it comes to Jews, basically finding them as cute as the dickens, and not even Dugowson’s occasional eclectic stylistic maneuvers prevent this semifeminist tale from periodically congealing into French middle-class boulevard fare. But maybe I just wasn’t in the mood. With Romane Bohringer and Elsa Zylberstein. (JR)… Read more »

I wouldn’t want to claim too much for this 1993 Finnish heist film with sardonic and comic touches, directed by Manhattan-based Ikka Jarvilaturi, but thanks to its gorgeous black-and-white cinematography, its fine acting and casting, and a better-than-average script by Paul Kolsby, it’s much better as art and as entertainment than, e.g., The Usual Suspects. It’s set in decidedly uncommercial Estonia, where the Russian Mafia conspires to steal a billion dollars in gold that the government has been hiding for years by turning off all the electricity in the city of Tallinn. Sadly, once the electricity is turned on again, the cinematography reverts to color and the film becomes as conventional and boring as The Usual Suspects. But until then it’s a pleasure to watch, and even if it occasionally tries to do too much, that’s still an improvement on the usual Hollywood heist-movie strategy of filling in the blanks. Also known as Darkness in Tallinn. (JR)… Read more »

One of Seijun Suzuki’s best-known and most celebrated youth pictures is this 1966 feature set during the 30s. It’s conventionally referred to as antimilitaristic, but, as the title suggests, it’s not quite as simple or monolithic as that. Like other B-movie maestros, including Samuel Fuller and John Woo, Suzuki often takes a stylistic relish in what he disapproves of and parodies. With Hideki Takahashi and Junko Asano. (JR)… Read more »

Portuguese filmmaker Manoel de Oliveira directed this 187-minute feature (1993), his 13th, in his mid-80s. His adaptation of a novel written at his suggestion by Agustina Bessa-Luis (who also wrote the source novel for Oliveira’s 1981 masterpiece Francisca) is largely a pastiche of Madame Bovary transposed to an upper-class Portuguese and 20th-century milieu, with a detailed offscreen narration that reeks of 19th-century fiction. Oliveira is both a high modernist and a Victorian aristocrat, which makes him paradoxically something of an opulent minimalist, and this beautifully shot, slow-moving, talky meditation on a life of leisure led by an adulterous woman differs most radically from Flaubert’s novel in its indifference to the middle class. There’s also a very modern and ironic attitude toward representation that leads Oliveira to emphasize the difference in the appearances of the two actresses who play the heroine at different ages. With Leonor Silveira, Cecile Sanz de Alba, and Luis Miguel Cintra. In Portuguese with subtitles. (JR)… Read more »

A grim, harrowing, andwithin its own debatable termshighly accomplished Russian feature (1992) by Alexander Rogozhkin (The Guard) about the exterminations of prisoners carried out by the Russian secret police shortly after the Bolshevik revolution, focusing in part on the mental deterioration of a bureaucrat in charge of the executions. Much emphasis is given to the ritualistic aspects of the killings, such as the stripping of the victims beforehand and the hoisting of their corpses out of the basement slaughterhouse and into a covered wagon. Stylistically the film is restrained and distanced to the point of outrage, and it’s difficult to determine how much Rogozhkin is involved in a historical commentary and how much he’s indulging in a morbid fantasy derived from such a commentary. With Igor Sergeyev and Alexei Polouyan. (JR)… Read more »

An unsettling work (1995) by subversive American independent Todd Haynes (Far From Heaven), his first film in 35-millimeter and best film overall. It’s been described as a movie about environmental illness, but don’t let that fool you: the alienation of one suburban housewife in southern California, effectively captured by Julianne Moore, may take physical form, but its sources are clearly spiritual and ideological. Haynes does a powerful job of conveying his hatred for the character’s Sherman Oaks milieu (where he himself grew up) through his crafty and at times almost hallucinatory layering of sound and image. (Though Haynes’s methodology is his own, you may be reminded at times of Michelangelo Antonioni and Chantal Akerman.) He also offers a scathing (if poker-faced) satire on New Age notions of healing. This creepy art movie will stay with you. 119 min. (JR)… Read more »

The Day The Sun Turned Cold

A remarkably effective and provocative contemporary Chinese melodrama (1994), based on a murder case in mainland China (where much of the movie was filmed), and written and directed by the talented Cantonese filmmaker Yim Ho (Homecoming, King of Chess). Told mainly in flashbacks, the story describes what happens when a worker in his 20s turns up at a police station to report that his mother murdered his father ten years earlier. No psychological ramification of the case is overlooked, and Yim’s mise en scene keeps the action suspenseful and emotionally potent. It’s certainly better than most recent American psychological thrillers that comes to mind (though the neglected Dolores Claiborne might give it a run for its money). With Siqin Gowa, Tuo Zhong Hua, and Wai Zhi. (JR)… Read more »

Very loosely — perhaps too loosely — based on the autobiographical writings of David Wojnarowicz, this experimental, low-budget first feature (1994) by Steve McLean focuses on an unhappy suburban childhood in New Jersey viewed from a gay male perspective. The film ransacks the repertory of experimental techniques in the way (if not to the degree) Natural Born Killers does, as it attempts to perk up three separate fictional stories about different stages in the same life. Some of the results are striking, some merely abrasive. With Jim Lyons, Michael Tighe, and Olmo Tighe. (JR)

Winner of the audience award at the Sundance film festival and two years in the making, this informative and chilling documentary by Heather MacDonald (1994) is about a telling sign of the New Barbarismthe 1992 Oregon ballot proposal to deny civil rights to homosexualsand the accompanying political campaigns for and against it. More terrifying than anything shown in the film are the outcomes of similar propositions in Oregon and other states since 1992. (JR)… Read more »