A Different Kind of Swinger [GEORGE OF THE JUNGLE]

George of the Jungle

There’s no getting around it: George of the Jungle is an amiable, highly ingratiating piece of lowbrow entertainment, and the audience of mainly young children and parents I saw it with on Saturday night clearly had a ball. So did I, for that matter. If consumer advice on where to take your kids is what’s needed, change “worth seeing” into “a must-see.” On the other hand, if I — a nonparent — had to choose between seeing it a second time and seeing the black-and-white Tarzan’s New York Adventure (1942) for the third or fourth time on video, I wouldn’t blink before selecting the latter. Both movies, as it happens, are comedies — though klutzy George, who swings on vines directly into trees, is an even more ironic version of the noble savage — but there are also major differences between them that I suspect are generational. I suppose I could rattle on about the reverse-anthropological satire of “civilization” in Tarzan’s New York Adventure, but in George those gags have their counterparts in the plentiful subtitles (for the spoken Swahili) and the jokes derived from them, which are every bit as sophisticated. 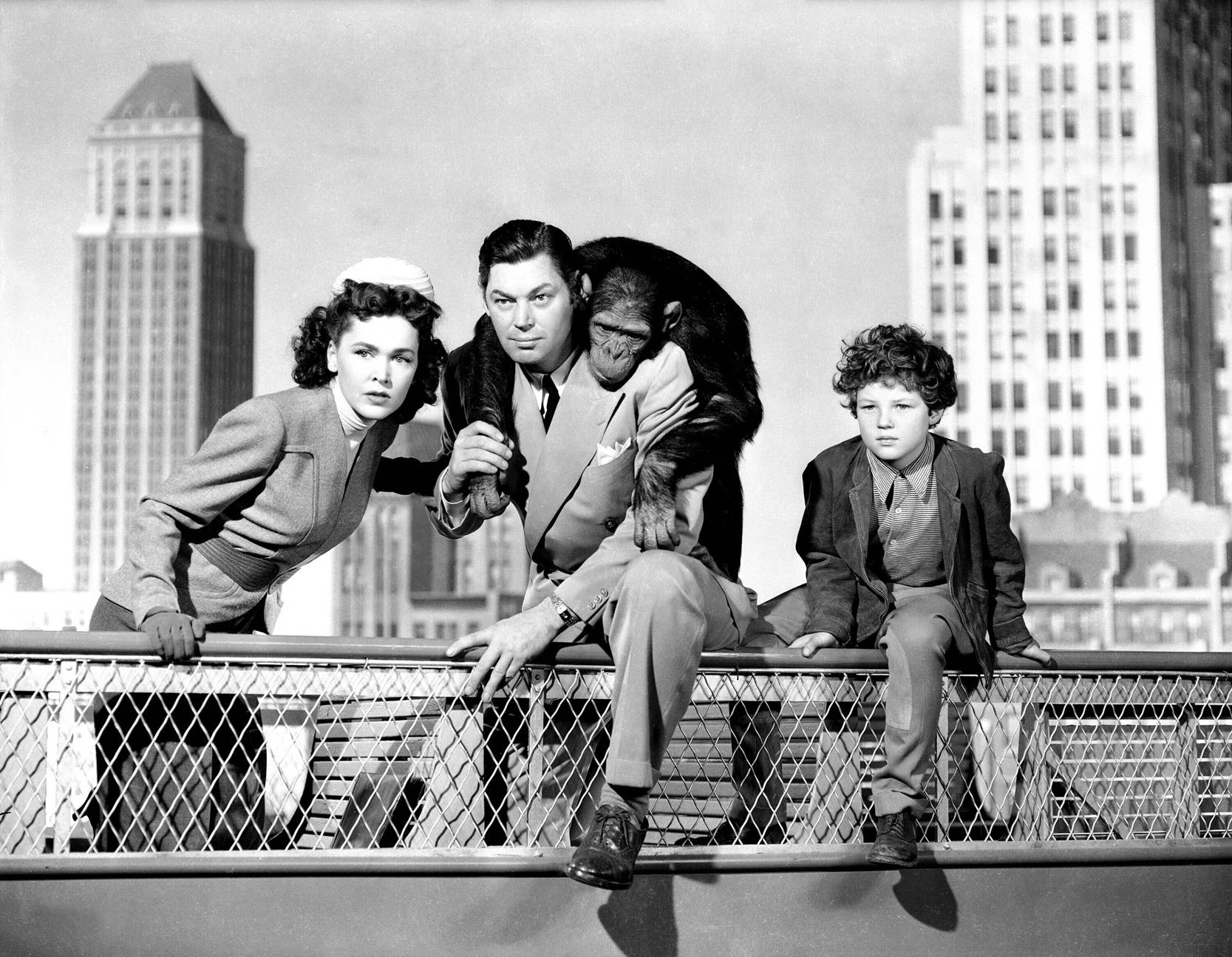 Tarzan’s New York Adventure came out the year before I was born; I saw it first when I was six. The next time was almost 30 years later, and though I might have liked it even more the second time, I’m sure I wouldn’t have — at least not in the same way — if I hadn’t enjoyed it a lot back in 1949. The fact that George of the Jungle relies on Tarzan’s New York Adventure for some of its niftiest ideas — in George the hero swings across the Bay Bridge rather than the Brooklyn Bridge — undoubtedly colors my experience of the new release. 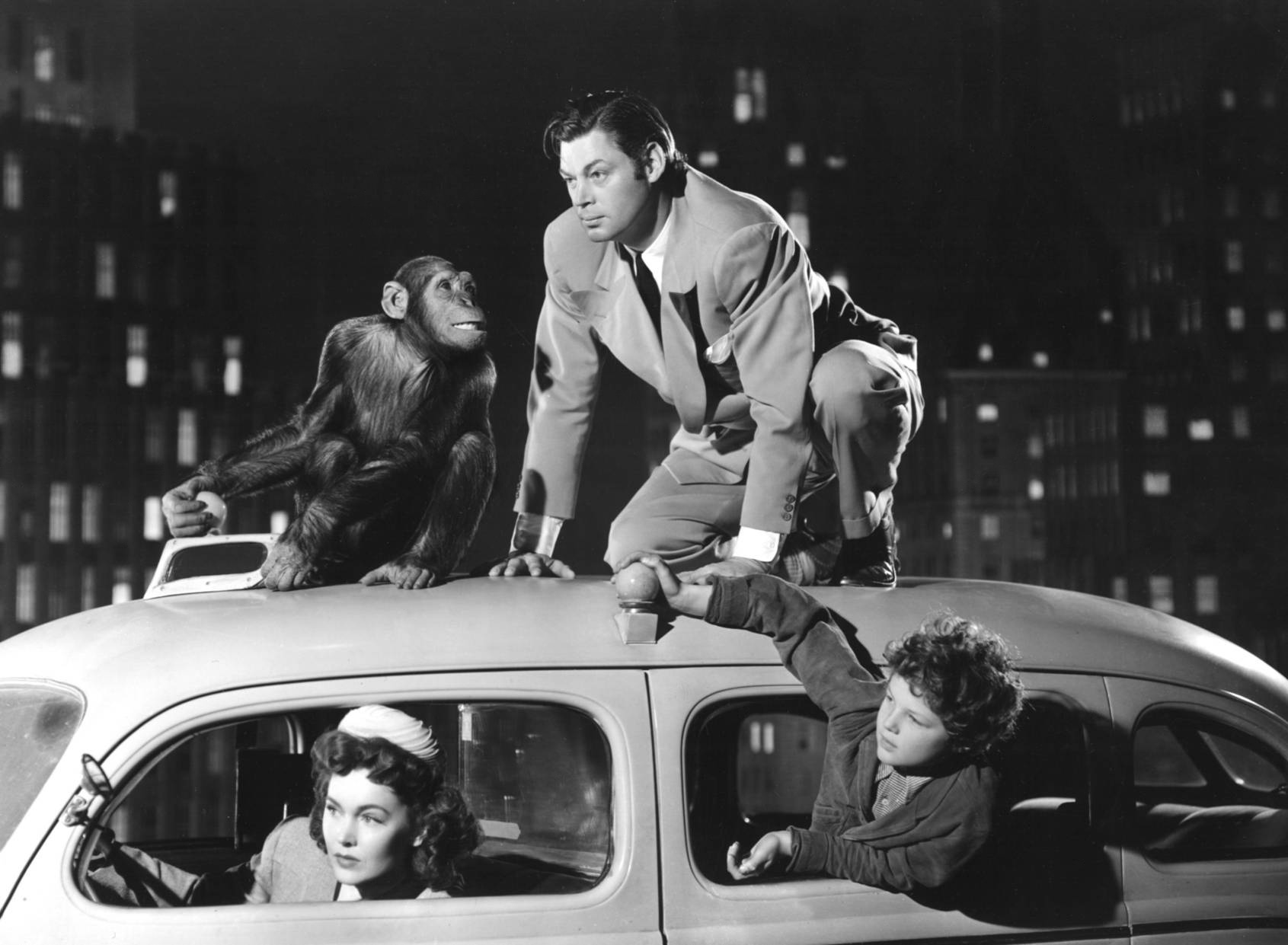 What we like and why we like it are always wrapped in layers of personal association. Part of what I like about George of the Jungle is the way it reminds me of Tarzan movies in general, with its tree house, swinging on vines, the hero’s echoing bellow, and the resident ape (Ape in George improbably yet irresistibly combines Tarzan’s Cheetah with Jeeves the butler). But these elements won’t amount to anything for kids who’ve never encountered Tarzan. And for viewers in their mid-30s, George of the Jungle may summon up Jay Ward’s animated TV show of the 60s, the source of this live-action adventure; for those closer to 40, it may recall Ward’s 1959 Rocky and His Friends. Dozens of other associations are possible for various people of various ages: viewers who saw the NBC live-action Tarzan series between 1966 and 1969, or the CBS cartoon series Tarzan, Lord of the Jungle between 1976 and 1977 — not to mention Tarzan and the Super 7 (1978-1980), The Tarzan/Lone Ranger Adventure Hour (1980-1981), and The Tarzan/Lone Ranger /Zorro Adventure Hour (1981-1982).

I can’t vouch for any of the Tarzan TV series, but one thing that George of the Jungle has that all the old Tarzan movies lack is self-referential humor; in George most of it comes from the solemn, pithy narrator (Keith Scott) and the way he interacts with the audience and the characters. There are other striking contrasts as well: a different kind of confusion between nature and civilization, a different take on the animal kingdom, and a very different sense of the threshold between what’s real and what isn’t. Needless to say, these differences tend to overlap, but let’s take each of them in turn:

Self-referential humor. Early on, when someone falls from a suspension bridge into a bottomless chasm, the offscreen narrator in George reassures us, “Don’t worry — no one dies in this story.” After we first encounter Shep, the elephant George trains to behave like a dog, we see it resting with an enormous Milk-Bone between its jaws until the narrator removes the treat with the comment “Wait a minute — the dog bone is too much: lose it.” When snobbish yuppie jerk Lyle Van de Groot (Thomas Haden Church), who comes all the way from San Francisco to “rescue” his fiancee Ursula Stanhope (Leslie Mann), falls face-first into a mound of elephant shit, the narrator informs us of the structure of the gag and, in advance, of its payoff (the native Africans exploding into laughter). And when Ursula, who’s fallen for George, tells her parents she no longer wants to marry Lyle, their first response is “That’s OK — we don’t mind,” followed by the expected outrage when the narrator interjects “Just kidding” and their initial response is instantly rewound and fast-forwarded.

The VCR reference provides a key to all the other jokey intrusions: whenever video is manipulated or undercut, with a remote control or a wisecrack, the reality and integrity of what’s being watched undergo a sea change. This isn’t to say that self-referential gags weren’t plentiful in comedies ranging from Hellzapoppin’ (1941) to Road to Bali (1952), but today there’s a firmer sense of audience control, a capacity to step more easily in and out of the fiction. 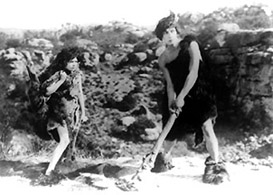 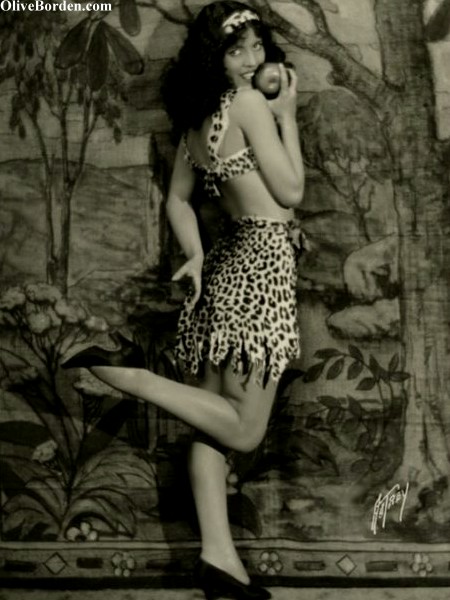 Nature and civilization. Tarzan’s tree house was an alluring fantasy of domesticated wilderness, following such delightful silent-movie precedents as the Stone Age interiors and gadgets of Buster Keaton’s Three Ages (1923) and Howard Hawks’s Fig Leaves (1926). But it added to these fancies a pantheistic vision of home comforts; swimming holes, swinging vines, leopard skins, and comfortable beds were all within easy reach. George’s tree house acknowledges the same sorts of desires but doesn’t provide my imagination with as much of a playing field; there’s more spectacle than in the Tarzan movies but less narrative space. Perhaps you can’t have one foot inside and one outside the cinematic fiction and still expect to roam around inside it with the same freedom. Though much of George of the Jungle was shot in Hawaii, and most of the Tarzan pictures were shot on studio lots, the jungle in the new picture is more like a theme-park ride, including the fixed itinerary — more conducive to fun, perhaps, but less conducive to dreams.

The animal kingdom. I probably had as much of a crush on Cheetah in 1949 as I did on Terry Moore in Mighty Joe Young the same year. And certainly the image in George of the full-grown gorilla Ape wearing glasses and an apron while serving Ursula breakfast on a decorous tray is wonderful; the voice of John Cleese only enhances the charm. But I would argue that if six-year-olds today get crushes on Ape, it’s no longer a matter of being charmed by anything that the natural world has to offer, and the same holds for Shep, Tookie-Tookie Bird, and a capuchin monkey. These beasts are composites, clever fusions of real animals, animatronic robots, and costumed actors; they amount to things of the mind, not of the physical world. Like the “virtual pets” I’ve recently seen advertised, these kinds of artifacts and abstractions are likely to have imponderable lasting effects. But insofar as TV and video already function as virtual parents and baby-sitters, these virtual creatures are only the latest laps along a road we’ve been traveling for 40 years.

What’s real and what isn’t. Most of the time in George of the Jungle, we haven’t a clue. Halfway through the credits, while we’re retracing George’s history — he survived a plane crash and was raised in the jungle by apes — we pass from animation to live action, but the change is strictly a matter of style, not content. As Lisa Alspector rightly puts it in her Reader capsule review: “A perfect use of digital technology, this live-action movie makes everything in front of the camera as malleable as cartoon imagery and exposes the limitations of the notion that cartoony violence gives impressionable viewers a distorted sense of reality.”

I would add that George of the Jungle treats its African characters with an affectionate respect and a sense of reality that makes their counterparts in the old Tarzan pictures seem even more appalling racist stereotypes. Despite the differences discussed above, it would be foolish to argue that a freewheeling comedy like this one has any less humanity or reality than the Tarzan pictures did in their time; it would be better to say that it’s a different kind of humanity and a different kind of reality, as audience members and filmmakers alike are faced with different options. 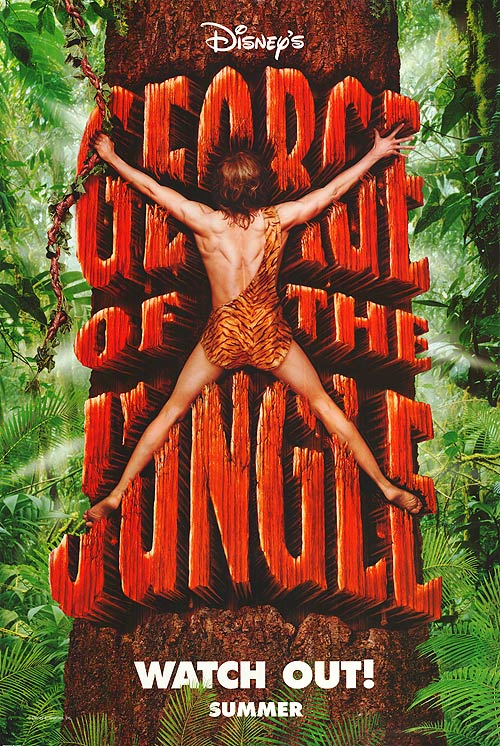