From the Chicago Reader (November 21, 1997). I tend to respect Verhoeven more nowadays than I did back then. — J.R. 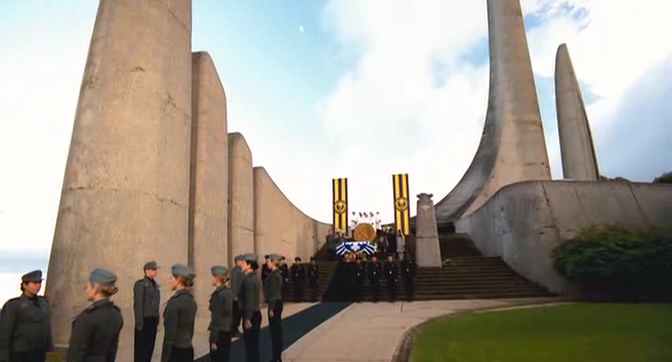 When did American action blockbusters stop being American? Sometime in the last two decades, in between the genocidal adventures of George Lucas’s Star Wars and those of Paul Verhoeven’s Starship Troopers, the national pedigree disappeared. True, Starship Troopers is a simplified, watered-down version of Robert A. Heinlein’s all-American novel, and it’s consciously modeled on Hollywood World War II features (as was much of Star Wars); it even boasts an “all-American” cast that could have sprung full-blown from a camp classic of Aryan physiognomy like Howard Hawks’s Red Line 7000. But the only state it can be said to truly reflect or honor is one of drifting statelessness. If the alien bugs that populate Verhoeven’s movie wanted to learn what American life and culture was like in 1977, Star Wars would have served as a useful and appropriate object of study; but if they wanted to know what American — or even global — life was like in 1997, Starship Troopers would tell them zip.… Read more »

Errol Morris’s best film to date–a clear advance on Gates of Heaven, Vernon, Florida, The Thin Blue Line, and A Brief History of Time–alternates interviews with four unconnected individuals: a lion tamer, a topiary gardener, a mole-rat specialist, and a robot scientist. The result is more a poem than a documentary, made coherent by Morris’s formal precision: he links found footage with the interviews, black and white with color, in a dreamlike continuity that invites the viewer to trace his or her own connections. It’s not at all difficult to watch, as the premise might suggest; in fact it’s beautiful as well as moving, an achievement of synthesis that announces Morris’s arrival as a master. Music Box, Friday through Thursday, November 21 through 27. –Jonathan Rosenbaum

Imagine you’re an American (or Dutch or French) tourist or explorer during the 1910s or 20s, visiting Africa, Indochina, the Dutch East Indies, and other remote places, gawking at the natives and their everyday lives and customs. At once fascinating and unnerving, this two-day, five-part program of silent films documents that experience. Having previewed about half of these intrusive travelogues on video, minus music and in some cases the early color processes some of them employed, I still found this a dazzling–and troubling–basket of riches. The filmmakers and their presuppositions are as clearly inscribed in the footage as their subjects, whether the spectacle happens to be Egyptians praying in 1920, the remarkable (and racist) animated interludes in a 1918 item about an American national park, extended looks at life in the Dutch East Indies in the teens, or 1928 glimpses of the American south (which imperialistically includes Cuba and Panama). When Martin and Osa Johnson, filming “Australian cannibals” in 1917, implicitly contrast their own “precautionary” rifles with those of the “bloodthirsty tribes” armed by “unscrupulous traders,” the duplicity becomes transparent. Saturday’s programs will include symposia at which an impressive array of local and visiting scholars (among them the University of Chicago’s Tom Gunning, Miriam Hansen, and Yuri Tsivian, three of the most sophisticated silent film specialists to be found anywhere) will delve into the meanings and implications of this rare material.… Read more »