Charles Burnett’s first foray into digital video, released in 1997 and running 55 minutes, is a fictional story about a homeless middle-aged man (Ayuko Babu of When It Rains) interspersed with a lot of documentary footage about the homeless, including several interviews. Both blocks of material have their own strength and validity, but they seldom mesh comfortably, and their juxtaposition tends to distract one from the subject at hand. (JR)… Read more »

Chronicle Of A Disappearance

Palestinian independent Elia Suleiman returned to Nazareth after many years in New York to make this 1996 first feature, an intriguing, highly sophisticated, and often very funny combination of fiction, documentary, diary, essay, and home movie. Armed with irony, absurdist humor, and a handsome visual style, Suleiman offers a surprisingly comprehensive portrait of middle-class Palestinian life in Israel and a complex understanding of Arab identity within that world that encompasses both family and friends. In Hebrew and Arabic with subtitles. 88 min. (JR)… Read more »

Two half-hour films by the Argentine-American artist. El dia que me quieras (The Day You’ll Love Me, 1997) mixes color with black and white in a poetic meditation on the famous 1967 photograph of Ernesto Che Guevera’s corpse surrounded by his Bolivian captors; the film… Read more »

One of the most beautiful and difficult of Jean-Marie Straub and Daniele Huillet’s features, this 1972 filming of portions of Bertolt Brecht’s novel The Business Affairs of Mr. Julius Caesar is a major early summary of this masterful filmmaking couple’s grasp of history and the material world. A young man in contemporary dress drives through contemporary Rome and interviews characters from ancient Romea poet, a jurist, a peasant, and a banker. Straub-Huillet’s unorthodox handling of space through editing is like no one else’s, and the duo’s passionate adherence to direct-sound recording is comparably powerful. (JR)… Read more »

Lost In A Harem

Standard Bud Abbott and Lou Costello farce, made in 1944 while Universal was loaning the team out to MGM; as a result, it’s a bit more opulent than most of their efforts. With Marilyn Maxwell (as a harem wife), Douglas Dumbrille (as a sultan), and the Jimmy Dorsey Orchestra; Charles Reisner directed. (JR)… Read more »

A lumbering SF thriller built around the perennial theme of the Return of the Repressed (cf Forbidden Planet and Solaris, among others); appropriately enough, the film itself regresses, starting in the present and winding up with a cautionary ending that evokes the hokiest SF movies of the 50s. In between, the star power of Dustin Hoffman, Sharon Stone, and Samuel L. Jackson carries one past some of the confused and confusing storytellingthe plot has something to do with finding an alien vessel a thousand feet down in the middle of the Pacificbut the lazy script and sprawling direction ultimately defeat everyone and everything. There are shocks and thrills along the way, but not many. Adapted from a Michael Crichton novel by Kurt Wimmer, Stephen Hauser, and Paul Attanasio, and directed by Barry Levinson (with a mid-film break to shoot Wag the Dog); with Peter Coyote and Liev Schreiber. (JR)… Read more »

Jivey all-black musical, some of it enjoyable and some of it fascinatingly dated, directed by William Forest Crouch in 1947 and featuring Louis Jordan and his Tympany Five, June Richmond, and Valerie Smythe. (JR)… Read more »

Partly because I love the style and grace of Virginia Woolf’s stream-of-consciousness novel, set over one day in 1923, and partly because I’ve had it up to here with classic English novels reduced to consumerist set-decoration jamborees, I walked out of this adaptation after 15 minutes at Cannes, and I’d be wasting your time as well as mine if I ever went back. True, Vanessa Redgrave plays Clarissa Dalloway, and maybe that’s justification enough to submit to the rest. Marleen Gorris (Antonia’s Line) directed the screenplay by Eileen Atkins (creator of the TV series Upstairs Downstairs); with Natascha McElhone, Rupert Graves, Michael Kitchen, and John Standing. (JR)… Read more »

Guy Maddin, responsible for Tales From the Gimli Hospital, comes up with an even stranger black-and-white feature (1990), made on a heftier budget, that involves amnesiac victims of mustard gas during World War I and the Russian Revolution. The hero, a Canadian soldier (Kyle McCulloch), mistakes a nurse (Kathy Marykuca) for his dead love; she’s married to a Belgian aviator (Ari Cohen) who can’t remember he’s married, and she gets so confused that she winds up mistaking the Canadian for the Belgian. There are other complications, but this film often appears to be about nothing at allexcept perhaps Maddin’s obvious love for late silent and early talkie studio productions with kitschy pictorial effects, as well as offbeat surrealist conceits, such as a hailstorm of bunny rabbits falling into trenches. What comes across is a fascinating fetishist delirium, where memories of remote war movies get recycled into something that’s alternately creepy and beautiful. 90 min. (JR)… Read more » 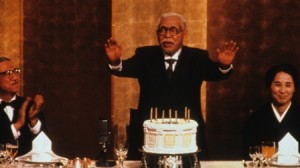 The Japanese title literally means “not yet,” a child’s response to the query “Are you ready?” in a game of hide-and-seek, and Akira Kurosawa’s 1993 film is his own way of saying the same thing. Written and directed by Kurosawa at age 83, this very personal film, set between 1943 and about 20 years later, concerns a retired professor (Tatsuo Matsumura), his circle of adoring former students (all male), his cat, and his wife. It?s full of moving moments, but unlike the exquisite Rhapsody in August (1991) it can’t be regarded as major Kurosawa. Basically a series of sketches drawn from the writings of Hyakken Uchida, the film periodically calls to mind John Ford’s The Long Gray Line as an extended valediction (one long birthday gathering seems to go on forever). Madadayo has the expressionistic simplicity of Kurosawa?s other late films, their distillation and intensity of emotion; one of the lengthiest episodes, about the loss of the hero’s cat, is especially powerful. There’s something undeniably hermetic and at times sluggish about the film’s style, but the sheer freedom of the discourse—the way Kurosawa inserts brief flashbacks into the narrative whenever he feels like it or ends the movie with a dream—is comparable in some ways to late Buñuel, and the film shares his poignant sense of wonder.… Read more »