Troy Beyera seven-year veteran of Sesame Street who went on to play the female lead in Robert Wise’s Rooftops and script B.A.P.S.wrote, directed, and appears in this low-budget independent feature. She plays a Miami advice columnist trying to launch a TV talk show in which young women talk about sex; Paget Brewster and Randi Ingerman play her two best friends, who help her shoot her pilot and talk a lot about their own sex lives. The sound bites of real interviews that punctuate this romantic comedy-drama give it some flavor and raunchy directness, but the movie turns phony every time a big emotional scene is called for and fatuous elevator music (its volume turned way up) chimes in. With Joseph C. Phillips, Michaline Babich, and Tina Nguyen. (JR)… Read more »

The seventh Halloween film is being described as the last, and that may actually turn out to be the case because there’s an earnest and successful attempt to give the series a satisfying closure. Jamie Lee Curtis–who made her reputation on the first Halloween but hasn’t been part of the series since the second–is now, 20 years later, teaching at an exclusive private school in northern California, raising a son as a single mother, and once again trying to fend off her murderously insane brother, who won’t stay dead. If you can accept the flouting of logic and credibility that usually goes with this kind of horror picture, this scary and suspenseful genre exercise, chock-full of false alarms and brutal shocks, really delivers, and Curtis approaches the assignment without a trace of condescension. Directed by Steve Miner from a script by Robert Zappia and others; with Michelle Williams, Josh Hartnett, LL Cool J, and Adam Arkin, and an amusing cameo by Curtis’s mother, Janet Leigh. Bel-Air Drive-In, Bricktown Square, Chatham 14, Ford City, Golf Glen, Lawndale, North Riverside, Plaza, 62nd & Western, Village North, Webster Place. –Jonathan Rosenbaum

Like Jane Campion’s The Piano, this first feature by writer-director Sandra Goldbacher is less a story about the 19th century than a fantasy about the 19th century, and as such even more erotic. The singular Minnie Driver (Circle of Friends, Good Will Hunting) plays a stagestruck Sephardic Jew in London in the 1840s. After her father is murdered she has to support her surviving family and, concealing her Jewish identity, secures a job as a governess on a remote Scottish island. The man of the house (Tom Wilkinson) is an inventor experimenting with photography, and after serving as his lab assistant she becomes romantically involved with him, though she’s also pursued by his troubled adolescent son (Jonathan Rhys Meyers). Goldbacher’s story is not always convincing as history, but it’s absorbing as a sort of gothic romance and sensually quite potent, and Driver carries it all with grace and authority. With Florence Hoath, Harriet Walter, and Bruce Myers. Evanston, Pipers Alley. –Jonathan Rosenbaum

Compared to the self-righteous xenophobia and hypocritical pornography of Oliver Stone and Alan Parker’s Midnight Express, this drama about a Malaysian drug bust and its consequences for three young Americans is serious, intelligent, and powerful. Three buddies (Vince Vaughn, David Conrad, and Joaquin Phoenix) do some adolescent carousing in Malaysia, then the first two leave the third behind. Two years later a lawyer (Anne Heche) notifies them that their friend has been arrested for possession of hashish, has been serving a prison term, and will be hung unless they go back to share the blame. If they both go back, each will have to serve three years, but if only one goes back, he’ll have to serve six. None of the moral ramifications of this dilemma is avoided, and to the film’s credit the behavior of the American press seems more questionable than the machinations of third-world justice. Directed by the talented Joseph Ruben (The Stepfather, Sleeping With the Enemy) and sharply written by Wesley Strick and Bruce Robinson, who adapted a 1989 fact-based French feature by Pierre Jolivet, Force majeure. With Jada Pinkett Smith. Broadway, Evanston, Lake, McClurg Court. –Jonathan Rosenbaum

From the August 11, 1988 Chicago Reader. It seems like one way of characterizing a Robert Frank film nowadays would be to say that it’s likely a film for which it’s almost impossible to find any adequate illustrations on the Internet. This is why I’m mainly had to depend on a couple of posters here, as well as the book jacket for the recent reprint of Rudy Wurlitzer’s first novel. –J.R. 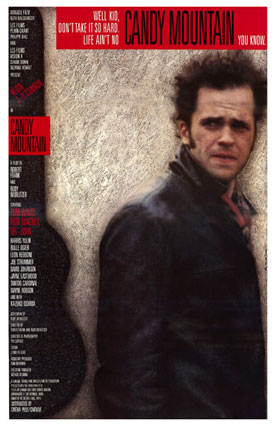 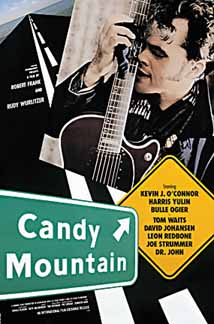 Is it my imagination, or has “60s” become less of a dirty word lately? Appearances can be deceptive, but in recent movies as diverse in quality (as well as in subject matter) as Who Framed Roger Rabbit, Young Guns, and Tucker, we seem finally to be acknowledging that certain 60s values persist in our minds and habits as something more positive than war wounds. The recognition comes slowly and begrudgingly, though — almost as if the Reagan era has kept it under lock and key, and plastered it over with warnings about freak-outs, burnouts, and death.… Read more »

From Malian director Adama Drabo comes this exuberant magical-realist comedy (1997) in which an 18th-century village’s war between the sexes casts a distinctly modern light on the role of women in Mali’s 1991 revolution. An abused young wife of the Dogon people steals a tribal mask ordinarily worn by men, demanding that they exchange roles with the women and take over the household chores; the men prove so inept that they’re exhausted by the end of the day, and some of them pretend to be asleep when their wives make sexual demands. Drabo’s relatively low-tech special effects are beautiful and charming, and his fascination with tribal rituals is balanced by a sharp sense of the contemporary (the film opens with a group of present-day city dwellers watching a Depression-era Hollywood musical on TV; a woman who insists on sitting in the “men’s section” inspires a traditional griot to recount the story of the Dogons). As in Souleymane Cisse’s remarkable Brightness, mythology and the politics of everyday life are intimately intertwined, and the film captures the wonder of a world where magic still lives. Film Center, Art Institute, Columbus Drive at Jackson, Friday, August 7, 6:00, and Sunday, August 9, 4:00, 312-443-3737.… Read more »

A piece of whimsy, set in Providence, involving two terrible singers (Sam Rockwell and Steve Zahn) who are mistaken for safecrackers and become entangled with rival Jewish gangsters (Michael Lerner and Harvey Fierstein). Writer-director John Hamburg’s American indie comedy is no great shakes as a movie, but it carries a distinct goofball charm. The crosscutting’s awkward (most obtrusively at the beginning and end) and motivations are barely sketched out, but the actors seem to be having a pretty good time. How amused you’ll be, though, will have a lot to do with how long you can remain tickled by such conceits as a bar mitzvah in which father and son are dressed in sweat suits. With Paul Giamatti, Christina Kirk, and Michael Schmidt. (JR)… Read more »

Like Jane Campion’s The Piano, this 1998 first feature by writer-director Sandra Goldbacher is less a story about the 19th century than a fantasy about it, and as such even more erotic. The singular Minnie Driver plays a stagestruck Sephardic Jew in London in the 1840s. After her father is murdered she has to support her surviving family and, concealing her Jewish identity, secures a job as a governess on a remote Scottish island. The man of the house (Tom Wilkinson) is an inventor experimenting with photography, and after serving as his lab assistant she becomes romantically involved with him, though she’s also pursued by his troubled adolescent son (Jonathan Rhys Meyers). Goldbacher’s story is not always convincing as history, but it’s absorbing as a sort of gothic romance and sensually quite potent, and Driver carries it all with grace and authority. With Florence Hoath, Harriet Walter, and Bruce Myers. 112 min. (JR)… Read more »

A rare example of independent cinema from mainland Chinaprivately financed, shot without authorization in Beijing, credited pseudonymously to Wu Ming (which means nobody in Chinese), and smuggled out of the countrythis odd and disturbing 1997 feature follows the morose tale of a performance artist who stages his own suicide. On the longest day of the year he plans to kill himself by melting a large block of ice with his own body warmth, a performance he calls Funeral in Ice. Given the importance of this film as a provocation and an act of courage, I wish I liked it more, but I can’t deny that there’s nothing else like it. (JR)… Read more »

A program of jazz-related films, showing in conjunction with the Chicago Jazz Festival. John Coney directed the 1974 film Space Is the Place, starring and cowritten by avant-garde composer, musician, and bandleader Sun Ra. In The Spitball Story, Jean Bach, director of the remarkable A Great Day in Harlem, uses the same techniques of oral history and thumbnail jazz portraiture to tell the story of why Dizzy Gillespie was fired from the Cab Calloway band and how this transformed his career; the film isn… Read more »

This 1997 piece of Japanese exploitation by writer-director Masashi Yamamoto shuttles between a devout blind woman, a crazed drug addict, a gang war, a Pakistani thief who hopes to marry a Japanese woman, and a Japanese-American who works temporarily as a prostitute and hooks up with a guy from the provinces, all within the same 24-hour period in Tokyo. The strength of the pictureapart from its gritty stylistic eclecticism, which incorporates video and unorthodox editing that suggests various drug experiencesrests mainly in its uncharacteristic and unofficial glimpses of Japanese society, especially of people living on the fringes of that society. A somewhat noirish project occasionally confused by the filmmaker’s desire to hoke things up with as much sex, violence, and gore as possible. (JR)… Read more »

The Son Of Gascogne

Pascal Aubier directed this sweet and winsome 1995 French comedy. A 20-year-old tour guide (Gregoire Colin) in charge of Georgian singers giving a Paris concert pretends to be the son of a famous (but fictional) French New Wave director named Gascogne alleged to have left behind an unseen masterpiece when he died in the mid-70s. This impersonation momentarily gains him admission to the French film world, an identity, and even the love of a young Georgian woman, who accompanies him around Paris in a giddy sequence in which they reenact famous scenes from French New Wave classics. Part of what makes Aubier, a middle-aged filmmaker, tolerant about this deception is his hero… Read more »

Richard Burton himself directed (with Nevill Coghill) this film version of the Christopher Marlowe play during the middle of what might be termed his Elizabeth Taylor period (1967), and the critics were not kind. Starring Burton himself, along with Andreas Teuber, Ian Marter, and Taylor, in a silent part, as Helen of Troy. Apparently Oxford University had a hand in the proceedings as well.… Read more »