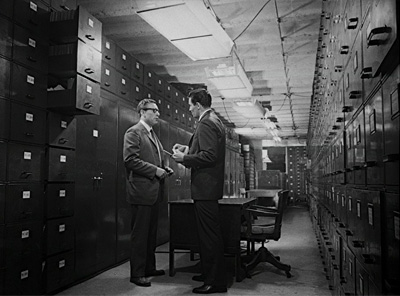 After seeing the work print of his last Hollywood feature, Orson Welles wrote a lengthy memo requesting several changes in editing and soundwork that was carried out in 1998 by producer Rick Schmidlin and editor Walter Murch with myself as consultant. About the original 95-minute 1958 release (superseded since the mid-70s by a 108-minute preview version), Dave Kehr wrote, “Eternal damnation to the wretch at Universal who printed the opening titles over the most brilliant establishing shot in film history — a shot that establishes not only place and main characters in its continuous movement over several city blocks, but also the film’s theme (crossing boundaries), spatial metaphors, and peculiar bolero rhythm.” These titles now appear at the film’s end — yielding a final running time of 111 minutes — and in the opening shot Henry Mancini’s music comes exclusively from speakers in front of the nightclubs and from a car radio. Other changes involve different sound and editing patterns and a few deletions, all of which add up to a narrative that’s easier to follow, but there’s no new or restored footage. To quote Kehr again, “Welles stars as the sheriff of a corrupt border town who finds his nemesis in visiting Mexican narcotics agent Charlton Heston; the witnesses to this weirdly gargantuan struggle include Janet Leigh, Marlene Dietrich, Akim Tamiroff, and Joseph Calleia, who holds the film’s moral center with sublime uncertainty.” (JR)