For A Few Lousy Dollars

Based on the 20 minutes I sampled on video, this low-budget, sub-Tarantino crime caper from Canada is worth your time only if your expectations are down, dirty, mean, and lowin a word, modest. Michael Bafaro directed the script by Ivan Tylor; with Ben Ratner, John Cassini, Frank Cassini, Freddy Andreiuci, and Lori Triolo. (JR)… Read more »

A better-than-average Quentin Tarantino imitation, this 1999 feature crosscuts the overlapping adventures of a teenage supermarket cashier (Sarah Polley) who’s filling in for a British coworker and trying to take over a little of his drug business to score some rent money, the coworker (Desmond Askew) partying in Las Vegas, and a couple of TV actors (Scott Wolf and Jay Mohr) caught up in a drug sting. The LA-underground characters, situations, and ambience keep this lively, even if most of the Tarantino-esque narrative rewinds seem forced and dutiful. Doug Liman (Swingers) shot and directed the script by first-timer (and coproducer) John August; others in the cast include Katie Holmes, Taye Diggs, William Fichtner, Nathan Bexton, and Timothy Olyphant. 100 min. (JR)… Read more » 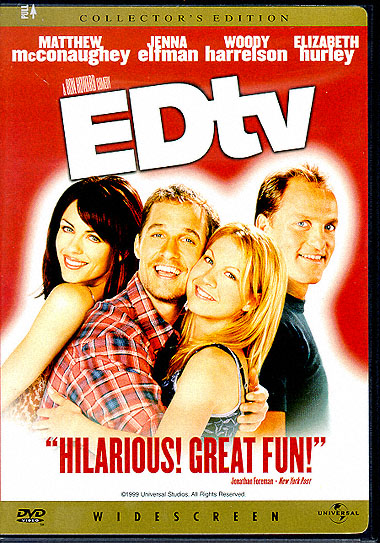 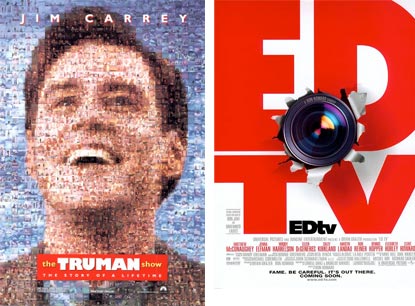 EDtv conforms to this pattern, though it runs up against a current conundrum — how can one criticize the excesses of the contemporary media without blaming the audience?… Read more »

10 Things I Hate About You

Larisa Oleynik plays a popular teenage girl forbidden to date until her shrewish older sister (Julia Stiles) finds a boyfriend; so she and her potential beau (Andrew Keegan) set about finding sis a match. Actually, this isn’t nearly as bad as it sounds; Karen McCullah Lutz and Kirsten Smith’s script has its witty moments, and some of the secondary characterssuch as Larry Miller as the father and Daryl Chill Mitchell as an irritable teacherare every bit as quirky as the leads. Gil Junger directed this 1999 Disney comedy derived from The Taming of the Shrew; though the connections are fairly loose, this is arguably closer to Shakespeare in its overall sense of character and even in its sprightly use of music than Shakespeare in Love. Others in the cast include Heath Ledger, Joseph-Gordon Levitt, and David Krumholtz. 97 min. (JR)… Read more »

I haven’t seen Disney’s Doug, the Saturday-morning animated TV series about young teens, but judging from this feature-length spin-off, it combines ugly color combinations and crude animation with engaging characters and plot situations that speak to adolescents. The plot in this case is a goofy reworking of E.T. in which the Lucky Duck Lake monster becomes the kids’ secret pal and nasty adults try to rub it out. Uncharacteristically pithy at less than 80 minutes, the movie makes room for a romantic subplot that has its own charms, culminating in the memorable line, Skeeter Valentine, dance me! Directed by Maurice Joyce from a script by Ken Scarborough. (JR)… Read more »

Three of the nine works on this program are by friends, so I’m glad I like them as much as I do. Sohrab Shahid Saless: Far From Home, Mehrnaz Saeed-Vafa’s highly personal tribute and invaluable introduction to the seminal filmmaker who worked in Iran and Germany and died last summer in Chicago, mixes clips, commentary, and interviews to create a poetic, bittersweet statement about loss and exile. Vanalyne Green’s Saddle Sores: A Blue Western, about contracting herpes from a Wyoming cowboy, includes many film clips, photographs, printed titles, country-and-western favorites, conversations with friends, and confessions. It’s every bit as jokey and analytical as Green’s earlier video A Spy in the House That Ruth Built, about her sexual attraction to baseball players; but here the narration is much more self-accusing as it explores how she romanticized cowboys and let herself get herpes, and then had to deal with the shame–which makes the relentlessly bantering tone a lot more unsettling and challenging. Ann Marie Fleming’s Tiresias offers a short, hilarious version of Ovid with animated stick figures. I also liked Paula Froehle’s experimental Fever, which interrelates sound, text, and images in original and arresting ways, and Anne Northrup’s narrative And Everything Nice, a psychologically acute portrayal of a little girl’s alienation from her parents at the time of Watergate, exceptionally well acted by Jessica Carleton.… Read more »

An adulterous, womanizing investigative journalist (director Clint Eastwood), on the wagon and somewhat over the hill, inherits an assignment to interview a man convicted of murder (Isaiah Washington) hours before he’s slated to be executed at San Quentin, and he becomes convinced that the man is innocent. Eastwood as a director generally alternates more adventurous projects (Bird, White Hunter, Black Heart) with bread-and-butter fare like the Dirty Harry movies, and this hokey thriller, reeking with 30s prison-movie stereotypes and High Noon countdowns, may be the price we have to pay for Midnight in the Garden of Good and Evil. The storytelling is as crafty and streamlined as ever, but the story itself, adapted from a novel by Andrew Klavan, is so shopworn that not even three better-than-average screenwriters (Larry Gross, Paul Brickman, Stephen Schiff) can overcome the cynical and absurd contrivances. Eastwood himself, pushing 70 but cruising women in their early 20s, counts on more goodwill than I can muster. I wasn’t bored, but my suspension of disbelief collapsed well before the end. With Denis Leary, Lisa Gay Hamilton, and James Woods. (JR)… Read more »

En route to Savannah for his big-scale wedding, a phony New Yorker (Ben Affleck) encounters a ditsy life force (Sandra Bullock); they have several picaresque adventures together, and he reaches Savannah less phony. At least that’s the way this tiresome romantic comedy, directed by Bronwen Hughes from a Marc Lawrence script, is supposed to play; I found it pretty phony all the way through, and not even the presence of Blythe Danner as the fiancee’s mother helps much. With Maura Tierney, Steve Zahn, and Ronny Cox. 105 min. (JR)… Read more »

A touching first feature (1997) by Jesse Peretz about the relationship between a young couple (Natasha Gregson Wagner and Giovanni Ribisi) living together in a small fishing village on the Louisiana bayou. She’s a local and he’s there on holiday, where he joins her estranged father (Robert John Burke) in a faltering business venture to catch eels. The plot is somewhat amorphous and not entirely helped by some symbolism involving a rat, but the overall feel of the location is perfectly caught, the poetic and atmospheric interludes punctuating the story are nicely handled, and the acting is first-rate. Adapted by Peretz and David Ryan from a story by Ian McEwan. Music Box, Saturday and Sunday, March 13 and 14. – Jonathan Rosenbaum

The Deep End Of The Ocean

This is really two movies rather than onea powerfully acted account of a mother (Michelle Pfeiffer) adjusting to the loss of her kidnapped three-year-old son and an account of how, nine years later, the boy searches for his identity after his family finds him. Each movie has its strengths, but the two never quite come together. Stephen Schiff adapted the best-selling novel of Jacquelyn Mitchard, and perhaps because Pfeiffer’s own production company made the movie, he has had to devote most of his energy to reconciling a star vehicle with a different sort of work. Though director Ulu Grosbard is as good as he usually is with most of the actors, the story problems tend to stump him too. With Treat Williams, Jonathan Jackson, Whoopi Goldberg, and John Kapelos. (JR)… Read more »

A better title for this atrocitywhich reportedly languished on the shelf for ages before being released like a noxious odorwould be Look Who’s Stalking. Kathleen Turner and Christopher Lloyd, both uncomfortable, play leaders of a baby products company who are trying to crack the baby talk code by studying genius infants locked away in the lab and babbling to one another. We get to hear what the toddlers are actually saying through the miracle of bad dubbing, and apparently it’s proof of their genius that they all speak in ad-copy cliches and do bad imitations of Billy Crystal delivering one-liners. One baby breaks free and contrives to liberate the others; the hokey dialogue and witless physical gags keep everything painful and hectoring. Director Bob Clark wrote the script with Greg Michael, Steven Paul (responsible for the similarly awful Slapstick), and others; with Dom DeLuise, Peter MacNicol, Kim Cattrall, and Ruby Dee. (JR)… Read more »

Reconfiguring the great 18th-century French novel Les liaisons dangereuses as a contemporary teen sex comedy might sound like a bad joke, but writer-director Roger Kumble and his compliant castincluding Ryan Phillippe, Sarah Michelle Gellar, Reese Witherspoon, and Selma Blairmake it a fairly sexy and amusing one. It’s less pretentious than the artier adaptations of the same novel directed by Roger Vadim, Stephen Frears, and Milos Forman, and in some ways comes at least as close as they did to the overall spirit of the original. With Louise Fletcher and Swoosie Kurtz. (JR)… Read more »

The Wachowski brothers turn their attention to metaphysical SF: Keanu Reeves discovers that the universe (i.e., America and environs) is run by computers that use human beings as batteries for bioelectrical energy, and that he’s living not in 1999 but roughly two centuries later; Laurence Fishburne enlists Reeves to lead a revolt staffed by a small multinational crew (including kick-ass heroine Carrie-Anne Moss). This is simpleminded fun for roughly the first hour, until the movie becomes overwhelmed by its many sourcesBlade Runner (rainy and trash-laden streets), Men in Black (men in dark suits with shades), Star Wars for mythology, Die Hard for skyscrapers, Alien for secondary characters and decor, Superman and True Lies for stunts, and Videodrome for paranoia. There’s not much humor to keep it all life-size, and by the final stretch it’s become bloated, mechanical, and tiresome. 136 min. (JR)… Read more »

I usually prefer the documentaries of the talented Israeli filmmaker Amos Gitai to his fiction films, but this 1998 narrative feature is fascinating nonetheless. The second part of a trilogy about contemporary Israeli cities, it focuses on a spoiled mama’s boy in the port city of Haifa who cheats on his wife, but the other characters become progressively more interesting, including his mother (who runs a bakery with her Arab husband), his wife, various members of his social circle, and even a bored surveillance officer who periodically observes the proceedings during a few comic interludes. Many of these characters are randier than those usually found in Israeli cinema, and the concentration on sex is refreshing; so are the glimpses of casual, everyday interaction between Jews and Arabs. The story may be unsatisfying, but it takes us through a lot of interesting and amusing places. 100 min. (JR)… Read more »

A broadcasting company puts an ordinary person’s life on round-the-clock cable, and what emerges is more enjoyable for the performances than for what it has to say about media or the audience (which isn’t very much). Ron Howard directed this comedy, written by Lowell Ganz and Babaloo Mandel; with Matthew McConaughey, Jenna Elfman, Woody Harrelson, Martin Landau, Sally Kirkland, Ellen DeGeneres, Rob Reiner, Dennis Hopper, and Elizabeth Hurley. (JR)… Read more »