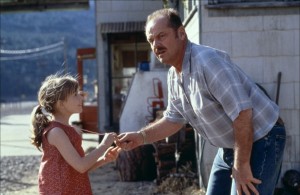 The third feature directed by Sean Penn and the first one that I’ve liked. Adapted by the couple Jerzy Kromolowski and Mary Olson-Kromolowski from a 1958 Friedrich Dürrenmatt novel, this is a nervy as well as somber piece of work, not only for the way it confounds and even frustrates certain genre expectations, but also — and especially — for how it confronts the viewer with the moral implications of that frustration. Jack Nicholson, in one of his most impressive, least show-offy performances, plays a Reno police detective who becomes obsessed with the rape and murder of a seven-year-old girl and by his pledge to her parents that he’ll catch the murderer — unlike his colleagues, he still considers the case unsolved. Though he makes a stab at retirement, moving into a fishing resort and taking over a filling station, he continues to track down what he believes are clues, but this movie qualifies as a mystery thriller only intermittently; it’s more concerned with how much he — and we — want the culprit, real or imagined, to spring out of hiding and continue his bloody work. An abandoned balloon at one juncture alludes directly to Fritz Lang’s M, and though Penn’s arty direction doesn’t belong in that league, he’s become a very accomplished storyteller and an adroit director of actors — including the omnipresent Benicio Del Toro, Aaron Eckhart, and, in striking cameos, Vanessa Redgrave, Mickey Rourke, and Helen Mirren.… Read more »