Robert Rossen’s 1961 feature is a somber morality play postulating as existential hero a pool hustler perfecting his craft (Paul Newman at his best). It makes wonderful use of its seedy locations (memorably filmed in black-and-white ‘Scope by Eugen Shuftan, who won an Oscar for his work) and its first-rate secondary cast (Piper Laurie, Jackie Gleason, George C. Scott, Myron McCormick, and Murray Hamilton). Adapted by Rossen and Sidney Carroll from a Walter Tevis novel, this picture is so much better than Martin Scorsese’s belated sequel The Color of Money that they don’t even belong in the same category. A postnoir melodrama with metaphysical trimmings, it does remarkable things with mood and pacing, and the two matches with Gleason as Minnesota Fats are indelible. 135 min. (JR) 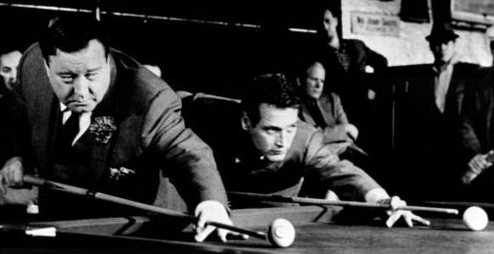