Too Young To Die

Park Jin-pyo’s semifictional love story (2002) about a man and woman in their early 70s, played by a real-life couple who reenact some of their own experiences, was banned in Korea until late last year because of its explicit sex scenes. I admire this feature more than I like it, partly because I resent the hokey music and wonder if the filmmakers aren’t a little too pushy in advancing their noble intentions. Still, this is a serious look at the potential joys and sorrows of growing old, and Park Chi-gyu and Lee Sun-ye are certainly affecting in the lead roles. In Korean with subtitles. 77 min. (JR)… Read more »

Brian Dannelly’s first feature is audacious and likable not only for its satirical treatment of fundamentalist Christian teenagers (Jena Malone, Mandy Moore, Macaulay Culkin, Patrick Fugit, Eva Amurri) and a couple of their elders (Martin Donovan, Mary-Louise Parker) but also for its sympathy toward them. Dannelly and cowriter Michael Urban seem to have firsthand knowledge of how religious vocabulary can deteriorate into a rhetoric that serves any agenda. Even more important, they balance their ridicule with a sharp sense of how difficult being a teenager is. It’s been a long time since I’ve seen a teen movie as lively, as unpredictable, as generous, and as tough-minded as this one. PG-13, 92 min. Pipers Alley, River East 21.… Read more »

Basque abstract artist Jose Antonio Sistiaga painted directly onto film with homemade inks to create this silent 1970 feature. But Sistiaga’s strangely titled work, which has recently been restored, is different from the films of Stan Brakhage, who didn’t come to film from painting and had his own rhythm. Among the predominant patterns in this abstract extravaganza are dancing drops and specks that alternately suggest satellites, flying saucers, or rushing bodies of water, and its combination of color and 35-millimeter ‘Scope (with about half an hour in black and white) yields the kind of spectacle one associates with musicals and SF epics. This gets richer as it develops, recapitulating and developing its motifs of shape and color, which inevitably suggest representational forms (pebbles and bubbles, bats and insects, stained glass and latticework), only to move beyond them, as music does. That’s why the silence here is absolutely necessary–it allows the images to sing. 75 min. Gene Siskel Film Center.… Read more » 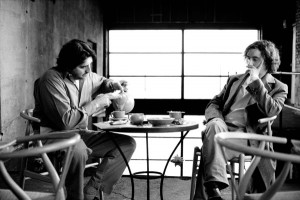 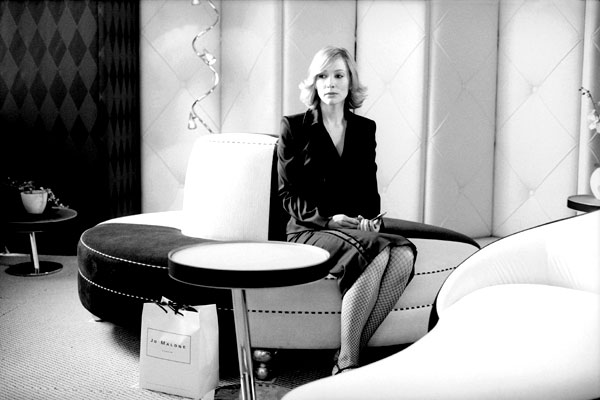 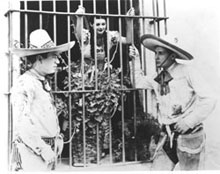 Directed by Fernando de Fuentes, this popular 1936 feature helped launch a new genre in Mexican movies, the comedia ranchera, which mixed comedy and music in rural settings. It tracks the long-term friendship between a ranch owner (Rene Cardona) and the orphan who becomes his foreman (Tito Guizar); both fall for the same woman (Esther Fernandez), a conflict that’s brought to a head by a kind of musical duel. This is more nuanced than one might expect in the handling of gender and class, and the populist fervor that’s become part of the period flavor is infectious. The graceful cinematography is by the great Gabriel Figueroa, best known for later collaborations with John Ford and Luis Buñuel. In Spanish with subtitles. 100 min.… Read more »

The only Jim Jarmusch feature that qualifies as apprentice work is his first (1980), shot in 16-millimeter for a master’s thesis at NYU. Sixteen-year-old drifter Chris Parker plays a version of himself as he walks the decrepit streets of lower Manhattan (the best scene shows him dancing to an Earl Bostic record). Jarmusch has already discovered his milieu, and his interest in both minimalist form and character as plot are already in evidence. But this lacks his characteristic charm, stylistic focus, and feeling for interactions between people, and the slowed-down Javanese gamelan music on the sound track only makes this seem more stodgy and intractable. 80 min. (JR)… Read more »

Also known as White Threads of the Waterfall, this 1933 film by the sublime Kenji Mizoguchi is one of his two silent features to have survived intact. The plot concerns a female entertainer, whose act involves juggling jets of water, and her romantic relationship with a shy young man; years later the man has become a judge and presides over her trial for murder. A major reason why sound films came later to Japan than almost everywhere else was the figure of the benshithe explainer who acted out all the parts and added commentary of his own, and whose popularity was such that audiences often went to hear and see their favorite benshi rather than the film stars. 110 min. (JR)… Read more »

Much as Eternal Sunshine of the Spotless Mind can be traced back to Alain Resnais’ Je t’aime, je t’aime, this poetic South Korean SF feature by Moon Seung-wook (2001)set in the present and including the same theme of characters who seek memory lossis one of the many stepchildren of Jean-Luc Godard’s Alphaville. As in the earlier film, the sound periodically drops off, with a similarly chilling effect, but the sources of melancholy here seem less technological than ecological and psychological. It’s interesting that the movie’s butterfly tours, which expose patrons to the oblivion virus, are closely associated with the U.S. (all the TV ads are in American English), while the forced abortions of teenagers suffering from lead poisoning seem tied to the acid rainthe American legacy of the greenhouse effect. More impressionistic than scientific, this sad poem lingers. In English and subtitled Korean. 116 min. (JR)… Read more »

I can’t vouch for its fidelity to Homer, but this version of the Iliad, scripted by David Benioff (25th Hour) and directed by Wolfgang Petersen, is clearly more than a prequel to O Brother, Where Art Thou? It has plenty of visual sweep, fine action sequences, and, thanks especially to Brad Pitt (as Achilles) and Peter O’Toole (as King Priam), a deeper sense of character than one might expect from a sword-and-sandal epic (even if Pitt’s character has some of the beefcake accoutrements of Leonardo DiCaprio’s in Titanic). Far from lost among the zillions of extras are Eric Bana (Hector), Brian Cox (Agamemnon), Diane Kruger (Helen), Orlando Bloom (Paris), Sean Bean (Odysseus), Rose Byrne, and Julie Christie. R, 165 min. Burnham Plaza, Century 12 and CineArts 6, Chatham 14, Crown Village 18, Davis, Ford City, Gardens 1-6, Golf Glen, Lake, Lawndale, Lincoln Village, Norridge, River East 21, Village North, Webster Place.… Read more »

Two months before her wedding day, a sexually inexperienced woman (Julianne Nicholson) persuades her fiance (Jay Mohr) that they should openly sleep around before marriage, and before long they, their friends, and her sister are competing with one another in promiscuity. Filmmaker Wallace Wolodarsky, who’s written for The Simpsons and who collaborated with Maya Forbes on this script, operates on the same satirical turf as Albert Brooks. He can’t compete with the master, but he does a pretty good job unpacking his characters’ southern California neuroses (such as guilt-ridden single parenting) and self-deceiving attempts at sexual liberation. Though this is more witty than laugh-out-loud funny, the castwhich also includes Lauren Graham, Bryan Cranston, Josh Charles, and Matt Daviskeeps things lively. R, 90 min. (JR)… Read more »

Morgan Spurlock assigned himself a 30-day diet consisting exclusively of McDonald’s food, monitored his health with a slew of doctors, and videotaped the whole process. The results are predictably horrific, superficially entertaining, and as ugly as the obese individuals the camera can’t seem to get enough of whenever it strays from the relatively slim hero and his girlfriend (a vegetarian chef). Spurlock’s smirking heavy-handedness appears to be inspired by Michael Moore; he even accompanies a diabetic’s stomach surgery with the Blue Danube waltz. Insofar as one can distinguish the investigative research from the career move, this Sundance prizewinner is effective muckraking, but as with junk food, two hours after you’ve seen it you’re hungry again, even though your brain has gotten fatter. 96 min. (JR)… Read more »

This innovative 2002 feature by Hany Abu-Assad (Rana’s Wedding), a unique mix of documentary and fiction, follows a minibus driver transporting diverse cargoes of passengers in Ramallah and Jerusalem. Sometimes the film interviews Palestinian and Israeli artist/intellectual passengers about the ongoing conflicts and sometimes it constructs mininarratives about the bus’s progress and adventures between various checkpoints. Almost everything we hear sounds intelligent and reasonable, and the presentation, which resembles at times a variety show, keeps the proceedings absorbing and unpredictable throughout. In Arabic and Hebrew with subtitles. 80 min. (JR)… Read more »