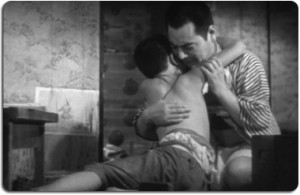 Inspired partly by King Vidor’s The Champ, this silent 1933 masterpiece by Yasujiro Ozu takes place in a Tokyo slum, where a slow-witted, good-hearted, heavy-drinking day laborer (Takeshi Sakamoto) tries to deal with his rebellious son (Tokkan Kozo). It opens with one of the funniest stretches of slapstick Ozu ever filmed, though the remainder is colored by Chaplinesque pathos. As the loving and lovable father, Sakamoto creates one of the most complex characters in Japanese cinema, and Kozo (who played the younger brother in I Was Born, But…) isn’t far behind. The milieu they inhabit is perfectly realized, making this a pinnacle in Ozu’s career. In Japanese with subtitles. 103 min. Dave Drazin will provide live piano accompaniment. Sun 2/6, 3 PM, Gene Siskel Film Center.