Not On The Lips 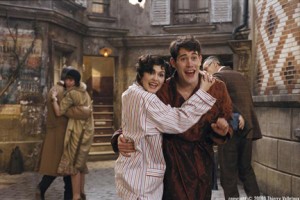 Alain Resnais’ best work since Mélo (1986) is, like that film, an eccentric and highly personal adaptation of a 1920s French stage hitin this case, a farcical 1925 operetta with a jubilant and inventive score by André Barde and Maurice Yvain. A happily married society lady (Sabine Azema) is terrified that her industrialist husband (Pierre Arditi) will discover that his new American business partner (Lambert Wilson) was her first husband; a subplot charts the coming together of two other couples (including Audrey Tautou and Jalil Lespert). The actors do their own singing, and the theatrical trappings of the original — including lavish sets and asides to the audience — are embraced rather than avoided. As lush as an MGM musical, this 2003 feature is both moving and very strange, with one of the funniest ever French portraits of a prudish American. In French with subtitles (often rhyming couplets). 117 min. (JR)