Ron Howard, an exemplar of honorable mediocrity, reunites with actor Russell Crowe and screenwriter Akiva Goldsman of A Beautiful Mind for this epic treatment of a seven-year stretch in the career of New Jersey boxer James J. Braddock. The story culminates in Braddock’s near miraculous defeat of Max Baer (Craig Bierko), which made Braddock world heavyweight champion, but despite the effective fight sequences, this is more about what it means to have your electricity shut off, enhanced by detailed re-creations of working-class misery during the Depression. Paul Giamatti is a particular standout as Braddock’s manager. Cliff Hollingsworth cowrote the screenplay; with Renee Zellweger, Paddy Considine, and Bruce McGill. PG-13, 144 min. (JR)… Read more »

A Dreamworks computer-animated feature (2005) about a lion (the voice of Ben Stiller), a zebra (Chris Rock), a hippo (Jada Pinkett Smith), and a giraffe (David Schwimmer) in a Manhattan zoo that get shipped to Africa, then find themselves unequipped for the wilds. Philosophical confusion abounds about the identity of both characters and places (apart from New York): the multiethnic beasts (including some hilarious penguins) oscillate between being kids and grown-ups, being animals and humans, while Madagascar itself veers from Africa to Hawaii and from nature to civilization. The music blithely bounces from New York, New York to Chariots of Fire to Louis Armstrong’s What a Wonderful World to the wind chimes from American Beauty. The whole thing feels throwaway, but some of the gags are funny. Eric Darnell and Tom McGrath directed. PG, 86 min. (JR)… Read more »

Samuel Fuller’s 1982 masterpiece about American racism–his last work shot in this country–focuses on the efforts of a black animal trainer (Paul Winfield) to deprogram a dog that has been trained to attack blacks. Very loosely adapted by Fuller and Curtis Hanson from a memoir by Romain Gary, and set in southern California on the fringes of the film industry, this heartbreakingly pessimistic yet tender story largely concentrates on tragic human fallibility from the vantage point of an animal; in this respect it’s like Robert Bresson’s Au hasard Balthazar, and Fuller’s brilliantly eclectic direction gives it a nearly comparable intensity. Through a series of grotesque misunderstandings, this unambiguously antiracist movie was yanked from U.S. distribution partly because of charges of racism made by individuals and organizations who had never seen it. But it’s one of the key American films of the 80s. With Kristy McNichol, Burl Ives, Jameson Parker, and, in cameo roles, Dick Miller, Paul Bartel, Christa Lang, and Fuller himself. PG, 89 min. Thu 6/2, 6 PM, Northwestern Univ. Block Museum of Art.… Read more »

There’s something about the goofy sprawl of French writer-director Arnaud Desplechin–his obscure uses of “Moon River” and Greek mythology, his unlikely casting of a black woman as a famous psychotherapist–that irks me even when he’s being brilliant. But this powerhouse 2004 movie lingers, and maybe, like his characters, Desplechin needs his eccentricities. Costarring two of his favorite actor-creatures, Emmanuelle Devos and Mathieu Amalric, as a single mother and her deranged ex-husband, this melodrama follows their narratives separately (she learns her father is dying; he gets committed to a sanitarium) before allowing them to commingle. It adds up to more than the sum of its parts, but you may not realize it for a day or so. With Catherine Deneuve. In French with subtitles. 150 min. Music Box.… Read more »

The visionary, transgressive art of director Kira Muratova might be described as bipolar, and these two eccentric comedies, both big successes in Russia, may be her lightest and her darkest. The Felliniesque Passions (1994, 112 min.) considers the wistful dreams of its characters, chiefly a nurse and a circus performer, while the episodes of Three Stories (1997, 109 min.) all deal with cold-blooded murders in postglasnost, posthumanist Russia. Both feature Renata Litvinova, an icy, statuesque blond with the beauty and power of a Hollywood icon; she was a screenwriter by profession, but Muratova turned her into a star (both women won Russian Oscars for their work on Passions). And both exemplify Muratova’s long-standing fascination with animals: Passions revolves around racehorses and takes place partly at a track, while in Three Stories the first episode is set near a zoo, the last one includes a good many cats, and the middle one, scripted by and starring Litvinova, is about an avenging murderess who prefers animals to people. In Russian with subtitles. (JR)… Read more »

The visionary, transgressive art of director Kira Muratova might be described as bipolar, and these two eccentric comedies, both big successes in Russia, may be her lightest and her darkest. The Felliniesque Passions (1994, 112 min.) considers the wistful dreams of its characters, chiefly a nurse and a circus performer, while the episodes of Three Stories (1997, 109 min.) all deal with cold-blooded murders in postglasnost, posthumanist Russia. Both feature Renata Litvinova, an icy, statuesque blond with the beauty and power of a Hollywood icon; she was a screenwriter by profession, but Muratova turned her into a star (both women won Russian Oscars for their work on Passions). And both exemplify Muratova’s long-standing fascination with animals: Passions revolves around racehorses and takes place partly at a track, while in Three Stories the first episode is set near a zoo, the last one includes a good many cats, and the middle one, scripted by and starring Litvinova, is about an avenging murderess who prefers animals to people. In Russian with subtitles. Video projection. Gene Siskel Film Center.… Read more »

Eight FBI trainees are sent to a deserted island by their bossy instructor, who wants to test their abilities as psychological profilers, but as they’re bumped off one by one, they begin to wonder who’s really calling the shots. Wayne Kramer and Kevin Brodbin scripted this gory thriller-whodunit, whose premise is loosely derived from Agatha Christie’s And Then There Were None. The plot twists are so preposterous that you can enjoy this only if you reject any relation to the real world, yet director Renny Harlin (Cliffhanger) is so adept at delivering this nonsense that you may find your task an easy one. With Eion Bailey, Clifton Collins Jr., Val Kilmer, Jonny Lee Miller, Christian Slater, LL Cool J, Patricia Velasquez, and Cassandra Bell. R, 106 min. (JR)… Read more »

William A. Wellman’s 1948 western, beautifully shot in Death Valley by Joe MacDonald, is gritty and ambitious, but the story, adapted by producer Lamar Trotti from a short story by W.R. Burnett, grows more conventional as it develops. A group of bank robbers fleeing the law (among them Gregory Peck, Richard Widmark, John Russell, and Harry Morgan) happen upon a ghost town where a prospector (James Barton) and his tough granddaughter (Anne Baxter) have been mining gold; some nearby Apaches serve to heighten all the tensions and conflicted loyalties. 98 min. (JR)… Read more »

Pared down from a French TV miniseries, this cagey and compelling 2004 documentary looks at the world of wine, but it’s actually a nuanced, provocative piece of journalism about globalization and its discontents. Filmmaker Jonathan Nossiter contrasts various vineyards as well as philosophies of wine making around the world, concentrating on France, Italy, and California. (Considering his eccentric focus on the dogs at each vineyard, he might well have titled this Mondo cane, but that’s already taken.) An American who grew up in Europe and India, Nossiter is mainly known for fiction features like Sunday and Signs & Wonders, which show some of the same political savvy displayed here. In English and subtitled French and Italian. Rated PG-13 for its fleeting image of a nude pinup. 135 min. (JR)… Read more » 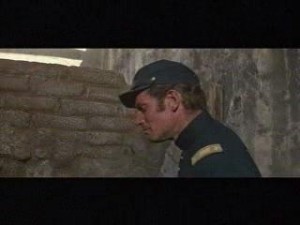 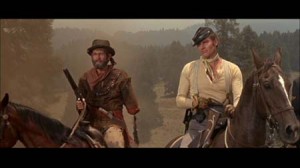