Love in the Time of Terror [Sally Potter’s YES] 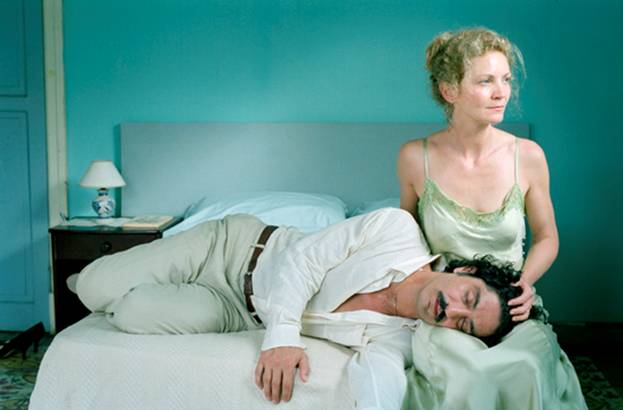 Directed and written by Sally Potter 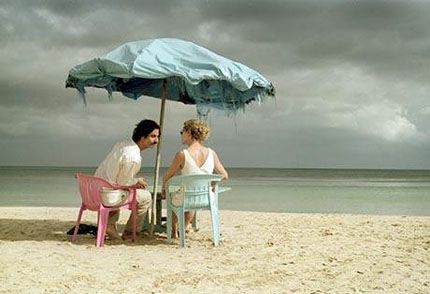 Yes. A film that irrefutably deserves its title. A film of affirmation. Which is not the same as a story with a happy ending…. If the places in this story become characters, what is the scene? The area of world politics today, nothing less, is the scene — and, above it, the sky to which everyone, at one moment or another, prays. — John Berger

Apparently sales of poetry go up in times of war. — Sally Potter 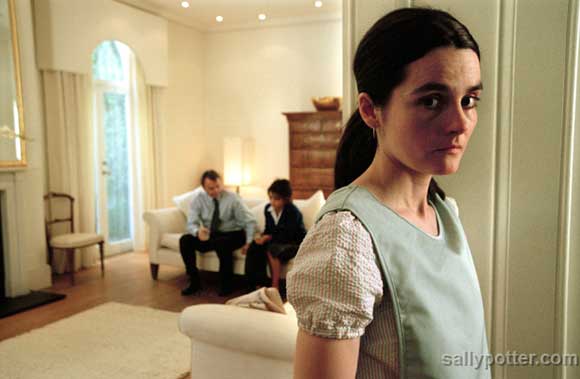 Many people feel a sense of helplessness about the ongoing war in the Middle East, feelings they’re often unable to articulate, much less address. Sally Potter’s Yes shows one way these feelings can be processed, and in doing so overturns some of the usual assumptions about what movies can and should do. It won’t please everyone, and the sensitive topics it touches on may make some viewers mad enough to spit.

Yes is a post-9/11 love story, set chiefly in London, about a passionate adulterous affair between an Irish-American scientist (Joan Allen), who’s unhappily married to an English politician, and a somewhat younger Lebanese cook (Simon Abkarian), who’s unmarried and used to work as a surgeon in Beirut. All the dialogue, which Potter wrote, is in rhyming iambic pentameter, ten syllables to a line, apart from a few direct declarations with eight syllables. Far from a gimmick, this is the ideal way to convey Potter’s poetic intelligence and her feelings about the contemporary world. Moreover, the dialogue is delivered with such skill by the actors that it remains expressive without ever seeming mannered or show-offy. 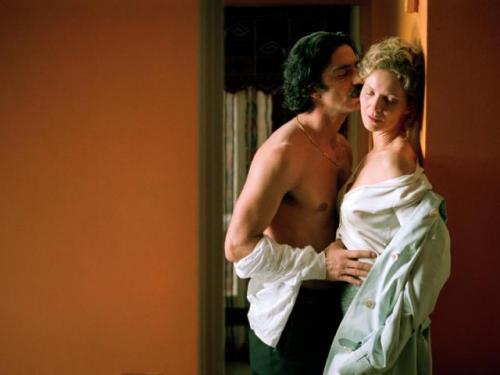 Yes firmly, if offhandedly, undermines several received notions: That movies are a visual medium, so images matter more than sounds in general and words in particular. That rhyming dialogue, unless it’s from Shakespeare or Dr. Seuss (as a reviewer in Boxoffice put it), is a fool’s mission — though according to the Reader’s Encyclopedia, “Insofar as one can generalize, [iambic pentameter] is the prevailing meter of natural English speech.” That movies shouldn’t try to address the state of the contemporary world. That using individual characters to represent nations, cultures, genders leads to facile generalizations (Potter’s two main characters are named He and She, the heroine’s maid serves as a Greek chorus, and the heroine’s nameless dying aunt in Belfast stands for communism). That communism is dead and Cuba (where She flees after her aunt dies) isn’t worth thinking about except to scoff at.

Potter’s brazen movie seems to invite ridicule, though it’s more lighthearted in its provocations than heavy-handed or bleak. Variety, the Hollywood Reporter, and the New York Times have run hyperbolically hostile reviews, yet Potter noted during a recent trip to Chicago (her Yes blog is at www.yesthemovie.com/index.jsp), “It is such a vindication for me and for all of those who worked on the film with such dedication that the very things that so many financiers found scary and to be avoided at all costs — the verse and the politics — are precisely the aspects of the film that people seem to find the most exciting. Audiences, it would seem, are ahead of the game, eager and bold.”

Potter never discusses the war in the Middle East directly, though she started working on the film the day after 9/11. “What was evident was that there were going to be increasing levels of demonization of people from the Middle East and reverse levels of hatred of Americans,” she said during an audience discussion. “So I asked myself, what can I contribute as a filmmaker? I thought a good starting point was a love story between a man from the Middle East and a Western woman, in which love and attraction initially transcend difference. But when world events, history, and national identity can no longer be kept out of the relationship, they have to slug it out.” 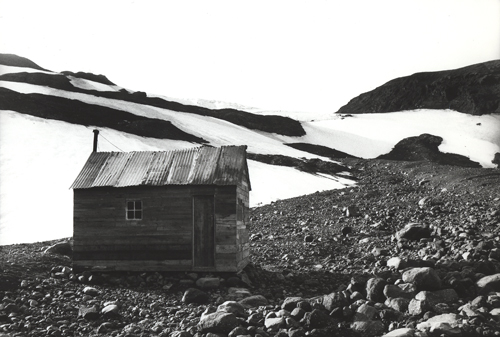 This is the first Potter feature I’ve fully enjoyed since her first, The Gold Diggers, a black-and-white feminist SF musical received so poorly in 1983 that she’s rarely allowed it to be screened since. Broadly speaking, the closest thing to a precedent for Yes is Alain Resnais and Marguerite Duras’ 1959 Hiroshima, mon amour. Fourteen years after the first atomic bomb was dropped Resnais and Duras found a way to deal with the emotional and ethical shock of that event through a series of spatial and temporal removes and through a love story that, like Yes, played out across a great cultural divide. That story, about a nameless French actress and a Japanese architect having a brief adulterous affair in the rebuilt Hiroshima, focused on the Frenchwoman recounting her traumatic persecution in France in 1945 for having had an affair with a German soldier. Without implying any sort of equivalence between her suffering and that of the bomb’s victims in Hiroshima, the film nevertheless created an emotional gateway between those experiences, and the music of Duras’ language and Resnais’ exquisitely timed cuts and camera movements gave a healing and clarifying form of expression to the unbridgeable and the unimaginable. 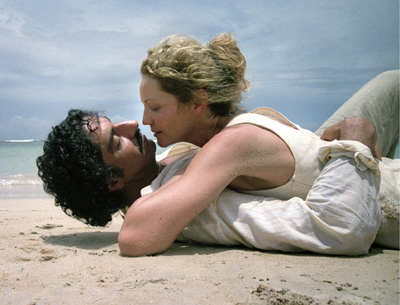 Potter isn’t dealing with a trauma buried in the past but one that’s ongoing, though she too uses spatial and cultural removes. The hero isn’t Afghan or Iraqi but Lebanese (and, reversing standard procedure, he’s more sexually objectified and glamorized than the heroine), she’s an American born in Ireland and living in England, and the film’s set in London, Beirut, and Havana, not Kabul or Baghdad. Potter, who’s a trained musician, is using her own poetic language, cuts, camera movements, canted angles, periodically slurred action, and other visual strategies to create emotional gateways into intellectual concerns. Differences in class parallel and overlap differences in culture, but her rhyming lines are clarifying, not vilifying. Consider these lines from three different parts of the film:

She (to He): You cannot look me in the face / And say I am your fall from grace.

He (wearily): From Elvis to Eminem, Warhol’s art, / I know your stories, know your songs by heart. / But do you know mine? No, every time, / I make the effort, and I learn to rhyme / In your English. And do you know a word / Of my language, even one? Have you heard / That ‘al-gebra’ was an Arabic man? / You’ve read the Bible. Have you read the Koran?

Aunt: A great big dream that’s fallen pretty flat / In all the other countries where they tried / It. They’ll regret it. Communism died, / But what came in its place? A load of greed. / A life spent longing for things you don’t need.

The strengths and limitations of these characters are essentially those of Potter’s poetic conceits, so they’re somewhat generic — which is why they lack names, unlike the husband (Sam Neill), the cook’s three coworkers, and a few others in the cast who project more prosaic and naturalistic social realities. Speaking most directly and intimately to us is the nameless maid (Shirley Henderson), who frames the film’s action as she periodically looks up from her work to address the camera. She’s the film’s philosophical conscience, which is evident mainly in her discussions of dirt and its meaning. She’s its Molly Bloom, providing the Joycean affirmation of the film’s title, the last word in Ulysses, though unlike Molly, she has an intellectual lucidity that goes well beyond libido. Her obvious lesson is that no one can address today’s problems without addressing our assumptions about a lot of things. 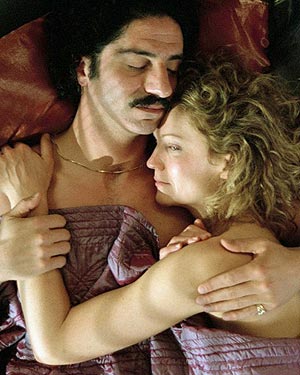