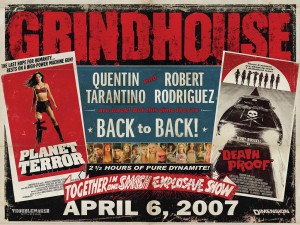 Quentin Tarantino and Robert Rodriguez’s celebration of 70s-style sleaze, 191 minutes long including a short intermission, seems ideally suited for gleeful, mean-spirited 11-year-old boys who can sneak into this double bill despite the R rating. I enjoyed the invented trailers the directors fold into the mix, but despite the jokey missing reels, these two full-length features are each 20 minutes longer than they need to be, and neither one makes much sense as narrative. Rodriguez’s Planet Terror is virtually nothing but gross-out gags involving castration, dismemberment, mass murder, zombies, and Osama bin Laden. Tarantino’s Death Proof starts off as a meandering look at Austin’s Tex-Mex joints — there’s more gab here than in any of his work since Reservoir Dogs — then gravitates into a blend of Faster, Pussycat! Kill! Kill!, Beyond the Valley of the Dolls, and stunt-driving movies, culminating in some well-filmed action and more celebratory killing. (Making us feel good about enjoying gory mayhem — or in my case, at least trying to do that — has always been his specialty.) With Rose McGowan, Freddy Rodriguez, Josh Brolin, Kurt Russell, Rosario Dawson, and Zoe Bell. (JR) 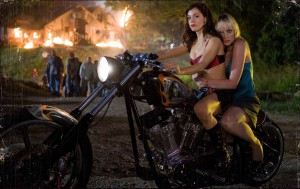