Here’s where the original post is, dated June 7, 2007, which has a better layout as well as 17 hyperlinks. This is basically a piece of postmodernist fiction, for better and for worse. –J.R. 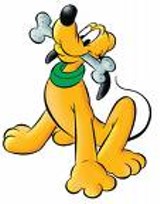 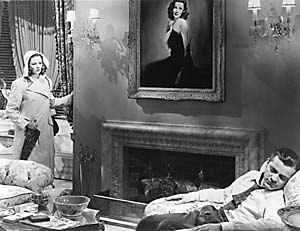 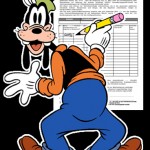 Goofus: a Latin declension of the middle-class Disney mutt, best known for his unbuttoned longjohns  and his stammering, guttural dim-wittedness. McPherson: the lovesick, necrophiliac cop played by Dana Andrews in Laura. Let’s suppose for the sake of argument that Walt Disney hired Otto Preminger to remake his own noir as a cartoon, a sort of animated True-Life Adventure. Or that Otto Preminger, opting for an animated remake himself, farmed out part of the work to the Disney studio, which took it upon itself to undermine the class status of Detective Lt. Mark McPherson by turning this gumshoe into a bourgeois fall guy and a dumb-ass canine to boot, meanwhile converting the Vincent Price character into some version of Lumpjaw the Bear, who was even dumber than Goofy, and which suggests refashioning Gene Tierney in the title role of the sweet missy as Lulabelle.

Why the Latin declension? Let’s call it an all-too-American cultural as well as psychosexual trade-off. A police detective from the Fox studio loses his class origins and his macho edge but nevertheless provides a lesson in Latin declension to schoolchildren, who will thereby be taught to follow up “Goofus” with “Goofum,” thereby gratifying Otto’s or Walt’s desire to educate the masses, at least a little. Furthermore, as Wikipedia puts it in yet another article,”Starting with How to Play Baseball (1942), Goofy starred in a series of cartoons where every single character in the cartoon was a different version of Goofy. This took Goofy out of the role of just being a clumsy cartoon dog, and into a more complex role of symbolizing the struggles of the common man. The epitome of this staid everyman role for Goofy was in the cartoon No Smoking (November 23, 1951) where Goofy, in a world of Goofys, struggles desperately with nicotine addiction [a development perhaps suggested by his intermediate incarnation as Goofus McPherson]. The cartoon, a divergence into an edgier subject (something Disney has always tried to avoid), is now rarely if ever seen due to popular culture’s aversion to cigarettes.” 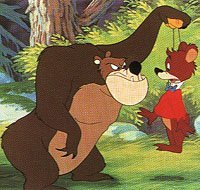 Dare one ask who would have been Bongo in this particular setup? And, for that matter, what role would the Clifton Webb character have had? (By way of partial explanation: Laura —- whose narrator, Waldo Lydecker, is played by Clifton Webb -—was released in 1944; Fun and Fancy Free —- whose first part, the “fun” part, recounted the story of Bongo the circus bear, with Lumpjaw as the villain and Lulabelle as the heroine —- came out in 1947. And to complicate matters further, Goofy appears as a peasant in the “fancy free” part of Fun and Fancy Free, Mickey and the Beanstalk — a fairy tale recounted by Edgar Bergen with the help of Charlie McCarthy and Mortimer Snerd to young Luana Patten at her birthday party.) Given his status as the ultimate beleaguered bourgeois male, it’s too bad that Goofy didn’t turn up in Bongo as well -— one of whose seven credited writers, the one who wrote the original story, was the veritable poet laureate of the American middle-class, Sinclair Lewis. 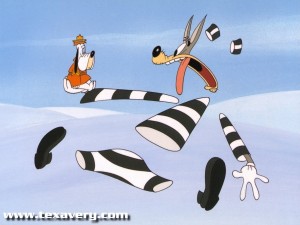 So what role would Lydecker have play in the life and adventures of Goofus McPherson? I’m afraid the project never even reached that stage. One might even say it was a genuine case of Goofus interruptus. What caused the whole thing to be shelved was an acrimonious debate that arose during one story conference regarding whether or not McPherson would be allowed to have a pet dog. This brought up the ongoing Disney taboo against conflicting paradigms, whereby Goofy and Pluto were forbidden to appear in the same cartoons. Allowing Pluto, an unclothed house pet on all fours with no command of English, to appear alongside Goofy, a clothed, English-speaking, two-legged and even property-owning canine, would raise all sorts of difficult class and race issues. (By significant contrast, Tex Avery’s Droopy, the cool eye in the center of a hurricane, always appears highly civilized, whether clothed or unclothed.) Furthermore, Goofy, as we’ve just noted, was permitted to smoke, while the very prospect of allowing Pluto to do the same -— or even of lighting up a cigarette for him, assuming that his paws couldn’t handle the task —- would have been unthinkable. Even obscene.