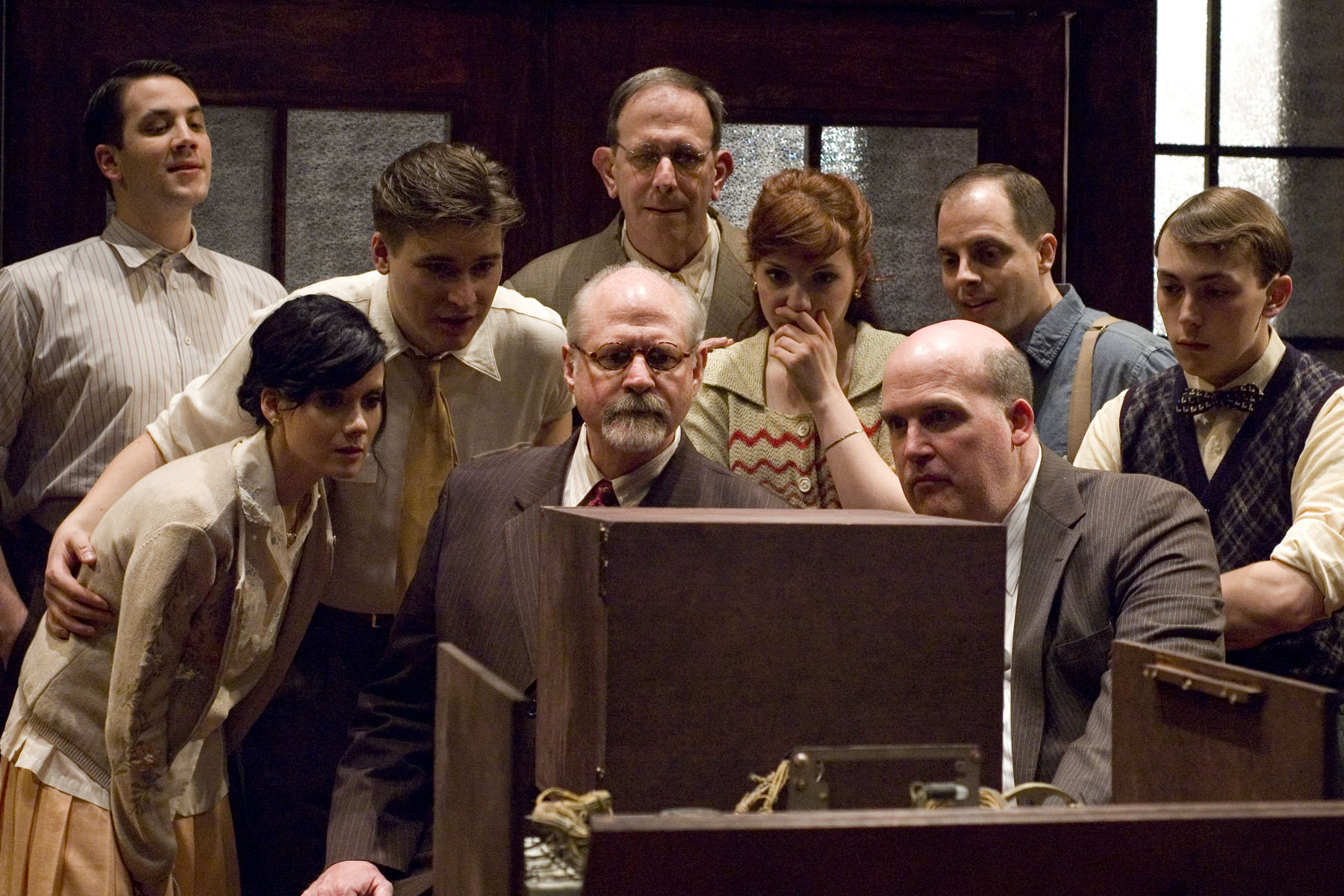 The Chicago production of the Aaron Sorkin play, The Farnsworth Invention, directed by Nick Bowling and playing through June 13, has the lively sort of staging, acting, and pacing that I’ve come to expect from the TimeLine Theatre Company, which presents “stories inspired by history that connect with today’s social and political issues” at their 615 W. Wellington headquarters. I discovered this company a little over year ago with the world premiere of Masha Obolensky’s Not Enough Air, also directed by Bowling, and have subsequently seen his production of Alan Bennett’s The History Boys as well, which was my first encounter with TimeLine’s remodeled, almost-in-the-round playing space. (In between these events, I also showed up for a reading of  Sophie Treadwell’s 1920s expressionist play Machinal, done as a sort of adjunct to Not Enough Air.) Neither of these follow-ups has quite equaled the sheer Wellesian bravura of the Not Enough Air production, but I can’t say that either one has ever bored me for an instant — even if the sheer energy required in the new playing space, with the actors moving their various props onstage and off with lightning-fast cues, can occasionally (if only momentarily) overwhelm certain aspects of the stories being told.

But The Farnsworth Invention at least has some more interesting history lessons to teach than its immediate predecessor, despite the fact that Sorkin’s theatrical engineering periodically distorts the historical record for the sake of simplicity and fluidity. (For a detailed unpacking of the distortions, go here.) The main lesson for me rests in the fact that hardly anyone has heard of Philo T. Farnsworth (played by Rob Fagin), the farm boy in Utah who not only invented television (having already worked out some of the rudiments in his early teens) but also coined the term for it, while practically everyone has heard of David Sarnoff (very adroitly played by PJ Powers), the other main player and narrator in this play, a Russian Jewish immigrant and business man who virtually stole the invention. (Many of Sorkin’s distortions rest on his interpretation of “virtually”.) After all, it’s business men rather than inventors or artists who tend to police the historical record as we usually know it. (Think of the accounts that are usually filtered down to us of Orson Welles at RKO,  as told by the studio honchos who fired him and/or their latter-day academic lackeys, or the fact that we’re usually obliged to understand Eric von Stroheim via Louis B. Mayer and Irving Thalberg.) It’s worth adding that the Sarnoff figure (see Powers below, on the left, opposite Fagin) dominates the play’s narration almost as much as he dominates the popular historical record. 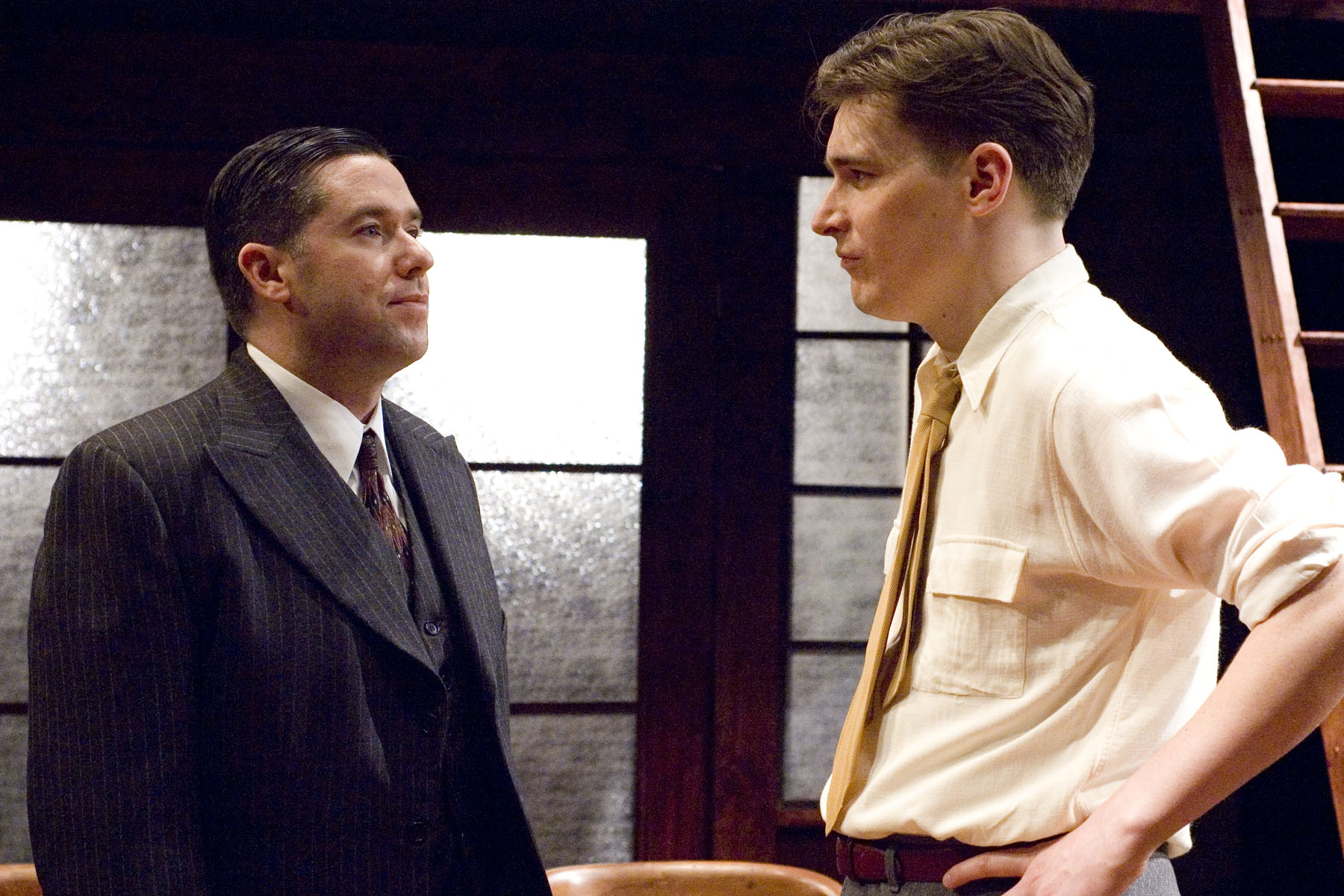 Sorkin himself has acknowledged how fast and loose he has been with some of the facts, and even manages to incorporate some of his trickery in what, for me, is the play’s most effective coup de théâtre — a climactic confrontation between Sarnoff and Farnsworth that Sarnoff admits, just after we’ve seen it, is purely his own invention. This Brechtian ploy helps to rationalize some of the play’s simplifications, and I guess the bottom line is that this play and production help to start the learning process rather than assign it any definitive closure. [4/22/10] 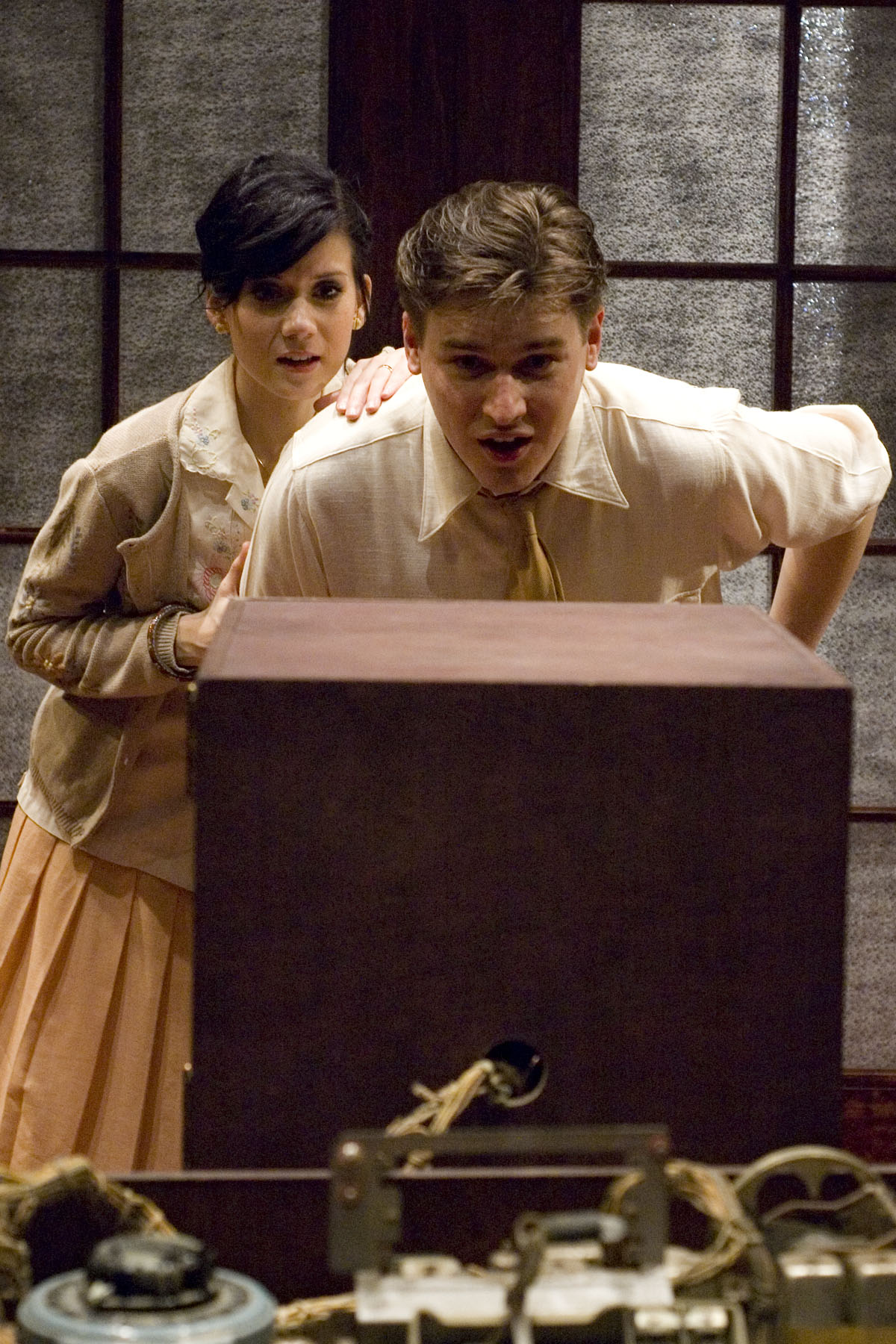