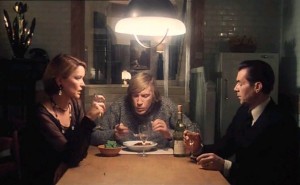 I shelled out $56.19 in US dollars (including postage) to acquire the definitive and restored, director-approved DVD of Providence (1977) from French Amazon, and I hasten to add that this was money well spent. Notwithstanding the passion and brilliance of Alain Resnais’ first two features, Providence is in many ways my favourite of his longer works, quite apart from the fact that it’s the only one in English. And I can’t ascribe this preference simply to the contribution of David Mercer (1928-1980). I recently resaw the only other Mercer-scripted film I’m familiar with, Karel Reisz’s Morgan!,  and aside from the wit of its own sarcastic dialogue I mainly found it just as flat and tiresome as I did in 1966, for reasons that are well expounded in Dwight Macdonald’s contemporary review (reprinted in his collection On Movies).

I haven’t yet been able to see The Life of Riley (Aimer, boire et chanter), Resnais’ swan song, but clearly part of what gives Providence even more resonance now, writing less than a month after Resnais’ death, is the theme it shares with his penultimate feature, You Ain’t Seen Nothin’ Yet (2013): an old writer facing his own death, and trying to create some form of art in relation to it.… Read more »