A capsule review requested by and written for MUBI’s Notebook in conjunction with an ongoing series at New York”s Film Forum. — J.R. 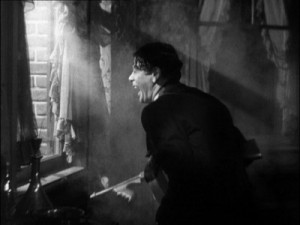 Scarface (Howard Hawks, 1932): A surprising amount of Howard Hawks’ unstable, weirdly graceful universe is informed by the imminence of death and the proximity of offscreen space, tied to the risks of tangling with sudden impulses. Few of his films are more aware of this encroaching void than Scarface, where X is made to mark the offscreen spot around every narrative corner. This frighteningly brutal black comedy, the least romantic of his crowd-pleasers — a much better gangster film than any of the Godfathers, especially when it comes to confronting reality — was made when people were far less deluded than they are today about the fact that their lives and destinies were being controlled by crooks. What makes it bleaker than Only Angels Have Wings and Rio Bravo is the small and indecisive role friendship is allowed to play in holding back the darkness; perhaps only Land of the Pharaohs betrays a comparable nihilistic bleakness. — Jonathan Rosenbaum