En Movimiento: The Man Who Would Be King

En Movimiento:  The Man Who Would Be King

Errol Morris: “If you could give Charles Foster Kane advice, what would you say to him?”

Donald J. Trump: “Get yourself a different woman.” 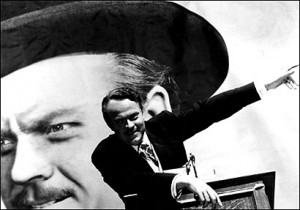 It isn’t surprising that Citizen Kane is Donald Trump’s favorite movie. Thanks to the input of Herman J. Mankiewicz, an unhappy cynic, Orson Welles’ first feature is the only one he ever made that views corruption from a corrupted viewpoint; all the others see corruption from a vantage point of baffled innocence. As an actor who specialized in playing corrupt authoritarian figures — tycoons (Kane, Arkadin, Charles Clay), racists (Kindler, Quinlan), conniving magicians (Cagliostro, Welles himself in Follow the Boys and F for Fake), power-mad officials (Colonel Haki in Journey into Fear, Cesare Borgia in Prince of Foxes, the Advocate in The Trial), a sly racketeer (Harry Lime), and several dissolute rulers—before achieving his best role as Falstaff, an innocently jovial jester to a prince, which failed to engage the mass audience to the same degree (as did his more innocent heroes in The Lady from Shanghai and Othello) — Welles as an anti-authoritarian writer and director only confused matters for the general public by undermining what he celebrated as a performer.… Read more »

This is what makes the singing and dancing seem absolutely necessary, not merely a simple flight from unpleasantness.… Read more »