Hollywood From the Fringes [INLAND EMPIRE] 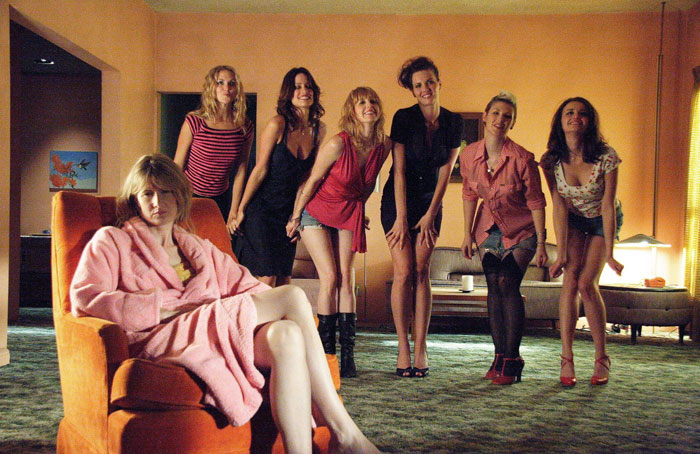 David Lynch’s first digital video, almost three hours long, resists synopsizing more than anything else he’s done. Some viewers have complained, understandably, that it’s incomprehensible, but it’s never boring, and the emotions Lynch is expressing are never in doubt. Asked many years ago about the origins of the nightmarish Eraserhead (1978), his first and best feature, he forthrightly replied, “Philadelphia.” If asked the same thing today about the no less nightmarish Inland Empire, he might say, “Hollywood.”

Many of my colleagues believe Lynch’s best early feature is Blue Velvet (1986), which I regard as a gripping but limited piece of designer porn. Like his more offensive Wild at Heart and his more charming TV series Twin Peaks (both 1990), Blue Velvet offers a vivid illustration of how a man can turn his most lurid puritanical obsessions into clout and big money — and get an audience to wallow in those obsessions without thinking about them very hard. It has little of the meditative integrity and private intensity of Eraserhead, but then little in his work before Inland Empire did. The exception was Mulholland Drive (2001), which also had a bone or two to pick with the Hollywood studio system and hinted that Lynch might be returning to his formal and poetic roots.

Writing about Wild at Heart in 1990, I suggested that Lynch’s career seemed to dispute William Butler Yeats’s memorable formulation “In dreams begin responsibilities.” He seemed to be in determined denial about the implications of the violence he trafficked in, with a child’s view of good and evil, a formalist attitude toward images and sounds, a solipsistic desire to remain politically disengaged, and a lack of interest in understanding or addressing how the grown-up world works. “To claim that Lynch is ideologically innocent and naive about his neofascist fun seems fair enough,” I wrote. “But to claim that he’s ideologically neutral is to succumb to that same innocence and naiveté.”

Lynch’s attitude doesn’t seem to have changed much since then except in one crucial area — the impact Hollywood has on artists struggling to keep their freedom and autonomy. In his new book Catching the Big Fish: Meditation, Consciousness, and Creativity he writes that not having final cut on Dune made him feel he’d sold out and that seeing it flop at the box office was “like dying twice.” He goes on, “It’s totally absurd for filmmakers not to be able to make films the way they want to make them. But in this business it’s very common.” It’s no surprise then that he decided to distribute Inland Empire himself to prevent meddling by other people. 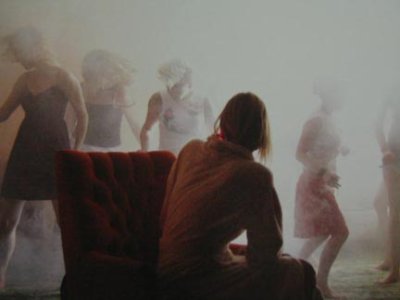 Inland Empire was shot piecemeal over at least a year on an outdated, low-tech PD-150 digital camera Lynch sometimes operated himself, and it looks as if he discovered a new paint box — it’s full of impressionistic soft-focus colors, expressionistic lighting, and disquietingly huge close-ups. It also has overlapping or interfacing premises rather than a plot, the principal one having to do with a wealthy married actress named Nikki Grace and played by Laura Dern. She’s cast as a southerner named Susan Blue in a Hollywood feature with the unlikely title “On High in Blue Tomorrows,” a part she gets after hearing it prophesied by an eccentric neighbor with a Slavic accent (Grace Zabriskie). Her costar is Devon Berk (Justin Theroux), playing a southerner named Billy Side, and their director is Kingsley Stewart (Jeremy Irons), who tells the leads as they start rehearsals that the film is a remake and that shooting on the original was interrupted by the murder of the lead actors. There are insinuations that Nikki and Devon might become involved while working together, including a sniggering suggestion by an unctuous TV hostess (Dern’s mother, Diane Ladd): “Are you going to be true to hubby with a wolf in the den?” 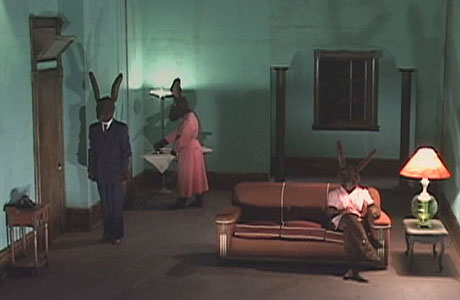 Before long Dern turns up in other identities, including a battered, tough-talking, working-class housewife and a hooker working Hollywood Boulevard. As one of these characters (I’m not sure which) she sits in an office telling an unshaven man, who might be her shrink or her manager, about kicking some guy in the balls. Other strands involve a Polish prostitute in a snow-covered city and an enigmatic sitcom starring giant rabbits, where the terse, banal dialogue is greeted by canned laughter. These apparently separate story lines and characters keep interacting and merging in peculiar ways, resulting in dreamlike jumbles. A non sequitur delivered by an associate of Kingsley Stewart’s about being “good with animals” is repeated much later by a homeless Asian woman near Hollywood and Vine, just before Dern’s street hooker, lying on the sidewalk beside her, spits out blood that splatters some of the stars on the Walk of Fame. The hooker has been stabbed in the stomach with a screwdriver — by a woman seen much earlier with a screwdriver sticking out of her own stomach.

In the latest Film Comment Amy Taubin reports that Lynch made for Lynchland, a Web site available only to subscribers, “a sitcom series, Rabbits, and the exceptionally crude and brutal (in form and content) animated series Dumbland, which is basically about wife-beating.” It’s hardly surprising that an artist working so intuitively and obsessively would recycle, but it’s impressive that he can keep his material and reflexes fresh. Inland Empire is full of good and bad girls, but he gives this obsession an interesting spin by having most of them played by the same actress. 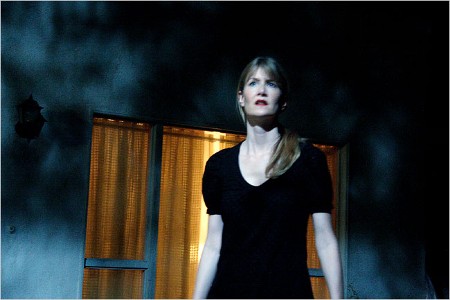 Lynch transfers his own mercurial consciousness to his characters, and his two best films are about being trapped and being vulnerable, though each one has happy intervals of escape, all conceived in musical terms–a song about heaven in Eraserhead and the magnificent celebratory sequence behind the final credits of Inland Empire, a Felliniesque music video staged around Nina Simone’s “Sinnerman.” Dern’s twisted features increase her vulnerability, even when she’s “bad.” And it can’t be a coincidence that unwanted pregnancies and related feelings of guilt play significant roles in both movies.

Lynch usually concentrates on whipping up his childlike or adolescent perceptions of good and evil without worrying much about their sources, but in his more personal takes on Philadelphia in Eraserhead and on Hollywood in Mulholland Drive he confronts aspects of the complex dealings he’s had with both industrial cities. In Inland Empire, after 30 years of struggling with studios, he goes further, recording some of his own visceral recoil from Hollywood in general and its meat market in particular — which makes me wonder if his art has been permanently changed for the better. The titles Eraserhead and Inland Empire, his only metaphorical titles, point to his guarded way of coping with his own ambivalence: he either censors (erases) some of his darkest thoughts or retreats into the relative safety of his inner self. And the title Inland Empire might even suggest the insularity of America itself.

But Lynch also seems to have realized that in Hollywood remaining disengaged and innocent ultimately compromises his freedom as an artist, and like it or not, he’s had to take a political stance. Dern spitting gobs of blood on the Walk of Fame couldn’t make it plainer.