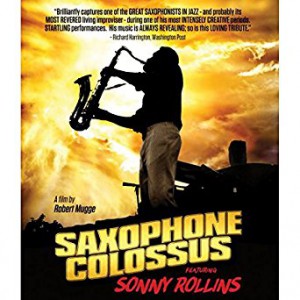 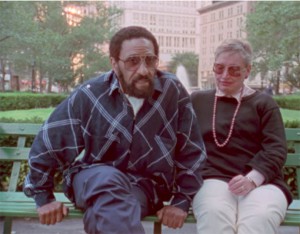 Most of what makes this 1986 Robert Mugge documentary, named after Rollins’ best  early album and produced by his late wife Lucille (seen above), so special is Sonny Rollins himself — currently approaching his 87th birthday — as a performer and improviser and his irrepressible stamina and power, combined with his choreographic skill in standing, walking, leaping, and tilting every which way while he plays his tenor sax and pours out his endless inventions. I’ve often thought in the past that jazz vibes players are the most cinematic of performers, because they can only play vibes by dancing, but Rollins has the rare and paradoxical capacity of doing the same thing while looming before us like a veritable mountain. At one point we even see him breaking his heel after leaping from the stage but continuing to play while lying on his back. 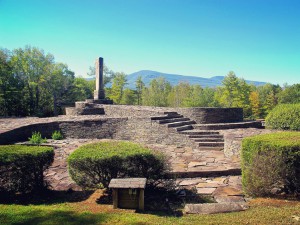 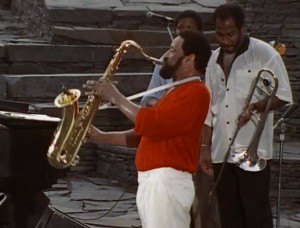 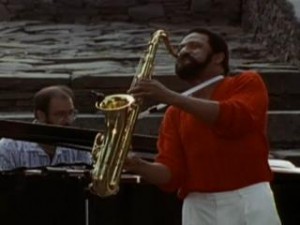 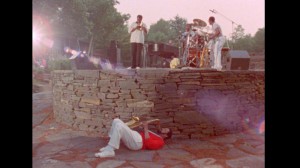 The most memorable portions of Saxophone Colossus are two rollicking numbers, “G-Man” and (more abbreviated) “Don’t  Stop the Carnival,” performed by Rollins with his quintet at Opus 40, the 6.5-acre environmental sculpture in Saugerties, N.Y. (see above) by the late Harvey Fite (1903-1976), who founded the fine arts program at my alma mater, Bard College. Less memorable to see and hear are portions of a concerto with a symphony orchestra performed at a premiere in Tokyo — not the sort of Third Stream monstrosity one might imagine, but still a composition that unavoidably reins Rollins in, both musically and gymnastically, at the same time that it inflates his cultural profile. And much the same can be said for Mugge’s activity as a filmmaker: in a half-hour extra on the Blu-Ray, he explains how shooting this Tokyo premiere with two cameras and one sound person, which helped to finance the film, also accounts for why he had to cut away from the performance to extraneous details and almost random street activity away from the concert hall in order to cover his elephantine subject. [8/5/2017] 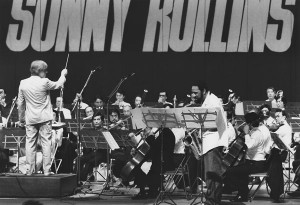