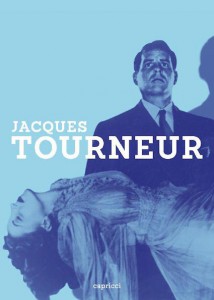 Published to accompany the Jacques Tourneur retrospective at the Locarno Festival last August, this collection has been issued in separate English and French editions; Capricci has kindly sent me a review copy of the former, and although I’ve only just started to dig into its contents, I’m looking forward to many pleasurable and profitable times with the rest. Apart from translating a few important texts from the past — extended interviews with Tourneur in Cahiers du Cinéma and Présence du Cinéma (both in 1966), an essay by Petr Král from Caméra/Stylo in 1986 — this book mainly consists of new essays, most of them translated from over a dozen French writers (including Pierre Rissient, Patrice Rollet, and Jean-François Rauger) and two Americans (Chris Fujiwara and Haden Guest). There are also many illustrations in this slightly oversized volume, My only complaint is with the layout that prints about two dozen pages of the text on a shade of dark grey that makes them extremely (and needlessly) difficult to read. If Marc Lafon, the book’s design person, was trying to approximate some notion of Tourneur as the poet of shadows, I’m afraid this effort was misguided, because all that comes out of this exercise is murkiness, not poetry. [10/14/17]