The Toronto Film Festival, now in its seventh year, takes place over ten days every September. Proudly dubbing itself a “Festival of Festivals,” it actually deserves that moniker a lot more than the New York Film Festival does, and not only because it shows about five times as many films. Insofar as its giddy pluralism derives from an overlap of disparate and even antithetical individual tastes rather than from a distillation based on committee decisions, Toronto democratically permits those attending to select their own festivals out of an overflowing mixed bag. This year, apart from the main standbys –- nightly galas chosen by festival director Wayne Clarkson and a large international selection by David Overbey, a Paris-based American critic – the multiple events included retrospectives devoted to John Cassavetes and Gena Rowlands, Brazilian and New Zealand cinema and Berlin underground director Lothar Lambert, as well as a superb new package by Kay Armatage featuring a wide array of independently produced work. While Armatage rightly pointed to many of her own choices as films that take risks, her fellow programmer Overbey, operating from a somewhat different set of preferences, should also be credited with selecting both of the films that wound up locking horns with the prudish Ontario Censor Board – Lambert’s Berlin-Harlem 1974 and Pierre Rissient’s Cinq et la peau.

I’m not ashamed to admit that out of the twenty or so films I saw in Toronto I missed all three of the prizewinners voted by the audience and press (Paul Mazursky’s Tempest, Rainer Werner Fassbinder’s Veronika Voss and Orlow Seunke’s The Hess Case). The truth is that I was too busy catching up with films whose lack of popularity tends to keep them unavailable elsewhere. And such are the contradictory dialectics of festivals like Toronto’s that one can also find work that is in fact quite experimental being universally identified as something else. : in the midst of a marathon live program of tributes and self-tributes to Martin Scorsese, it was actually possible to discover, during a clip of the “home movie” scenes of Raging Bull, that Scorsese as an editor can beat most of the structural filmmakers at their own game under the apparent conviction that he is simply telling a story for a popular audience.

Conversely, in the dreadful Come Back to the 5 & Dime, Jimmy Dean, Jimmy Dean, devoured like ice cream by a gala audience, it was possible to see Robert Altman’s cynical restaging of his own Broadway rendering of Ed Graczyk’s play eliminate precisely those aspects of experiment that made the stage production intermittently interesting. Transitions in time and space that were effected by specific coordinates on stage (an actor and actress simultaneously play the same character ten years apart; the time shifts are signaled by changes of pitch in an actress’s voice) are now characteristically layered like coats of paint through graceless dissolves. This replaces significant functions of the spectator’s imagination and the actors’ skills with the mechanical operations of camera and lab –- reductions of meaning and nuance that, to judge by the corresponding audience’s responses, turns a fitful experiment into enjoyably campy trash for everyone.

As luck would have it, I saw the Altman film just after another theatrical adaptation, Paul Morrissey’s version of Alan Bowne’s play Forty Deuce –– a probable masterpiece and easily the best Morrissey film since Heat. In this case I hadn’t seen the original production, but clearly the play would come across as an exceptional work in any medium, and Morrissey’s directorial choices seem so right throughout the film that they bear much closer scrutiny than his offscreen politics and dubious aesthetic utterances to the press. Created out of male-hustler lingo as heard or imagined around New York’s 42nd Street (hence the title), Bowne’s language is a remarkable invention whose expressive possibilities border on the richness of Elizabethan English. One can readily tick off the precursors of this kind of profane poetry from Céline to Jean Genet to William Burroughs, but the sheer brilliance of the dialogue (delivered by the remarkably relaxed Kevin Bacon, Mark Keyloun, Orson Bean and others) puts it in a class by itself.

What Morrissey has done with the rhyming similes, singsong chants and laconically poetic street philosophy is no less dynamic. In the first half he shuffles his cast across long stretches of the Port Authority Bus Terminal, 42nd Street, and a nearby subway ramp in extended takes which recall Elia Kazan’s respect for actorly space in Baby Doll. In the second, where the action is mainly confined to a dingy hotel room with a corpse on the bed, everything is filmed in synch sound with two adjacent cameras and framed in split-screen.

The camera is as much on the prowl as the characters, in a state of watchful excitation throughout the film. A pool table is circled deliriously as in a Brian De Palma film, but more slowly, and the movement is capped with an abrupt halt, belying hustler moves and motives. In the hotel room, in a visual pattern that recalls parts of Jean-Luc Godard’s Numéro Deux, facing actors are shot from almost duplicate angles while separate actors are seen in counter-angles as a tense dialogue gradually takes shape. In one early scene, a character fussily fixes his hair in front of a man’s room mirror while a nearby pimp relentlessly chews out a junkie who’s poised to vomit into an adjacent sink — an image of casual disassociation that both anticipates and justifies the later use of parallel cameras and the consequent redefinitions, overlaps and divisions of dramatic space.

Festivals tend to create cultural mixes of all kinds, but sometimes the inadvertent disconnections are just as striking. As enjoyable as Les Blank’s Burden of Dreams is, it seemed a pity to have to consider it in isolation from the film it is about, Werner Herzog’s Fitzcarraldo. Seen alone it looked abstract -– a consideration of conquistadorial-directorial ego running rampant in the Third World rather than a film about Herzog’s efforts to make a specific movie. Through another programming fluke, the Canadian premieres of Wim Wenders’ Hammett and his short Reverse Angle: New York, March 1982 concerned in part with the editing of Hammett were held simultaneously in theaters a mile or so apart. (The following night, happily, they were seen together.) Insofar as the short offers a virtual disclaimer for Hammett in relation to producer Francis Coppola’s interference, and Wenders’ own in-person introduction to Hammett neatly omitted this ambivalence, the pairing of these films would seem to constitute required viewing for any serious look at Wenders’ encounter with Hollywood. 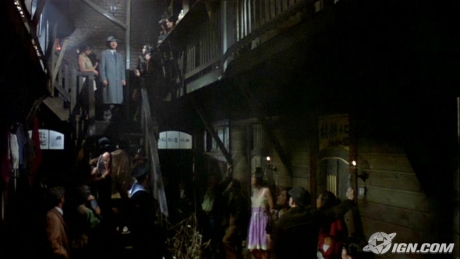 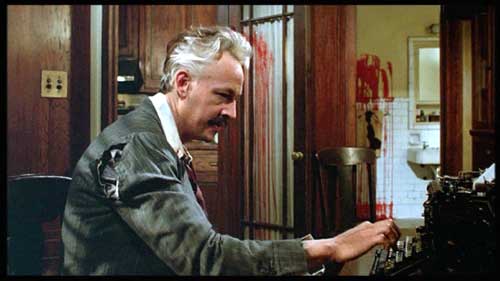 Yet to accept Hammett at all, one must be prepared for a European film in which everything from dreamy tempo to unidiomatic English (“just the cops, the crooks, and the big rich”) seems the sort of claustrophobic set-bound unreality (curiously more Franco-American than German) that occurs less in history than inside someone’s head. This places it a bit outside the canon of Wenders’ other work, but it does represent a substantial improvement over other recent Coppola enterprises. (To accompany a fractured evocation of the brutal beating sessions from Dashiell Hammett’s The Glass Key, there’s a deliberately pasteboard, pink-desert dream that surpasses the tacky refrigerator surrealism of One From the Heart in every conceivable respect.) And in a powerful mannerist ending with Frederic Forrest hammering at a typewriter (previously viewed from under the keyboard), the transformation of superimposed clips – from earlier lush color sequences into swank black and white approximations of The Maltese Falcon and related icons — reveals the film to be about the creative process of mythmaking itself. “Perhaps your work has made the habit of fantasy too strong to you,” someone remarks to Hammett, and the comment might constitute a self-reproach from Wenders too. But considering the simple elegance of the streamlined hearse that’s carrying this talent to the grave, what a way to go! It’s no wonder that Godard has praised this film as both Wenders’ best and the end of cinema.

Composed of multiple miniplots that never get very far past the “Oh, yeah” stage, Chantal Akerman’s creepy and lovely Toute une nuit actually recalls her nonnarrative 16mm Hotel Monterey of ten years ago more than her subsequent narrative features -– at least in its uncanny capacity to convey the sheer discomfort of bodies in rooms. Akerman’s drugged style — a spikey form of Belgian-Jewish punk trained on the commonplace –- seems to harden more than develop from film to film. It’s difficult to think of any other movie about a single night in which the rhythm of sleep feels so absent ; glowering, cadaverous insomniacs lurk in brooding pools of dark and semi-light while the Delvaux blue of the Belgian night outside seems to seep slowly into their bones. 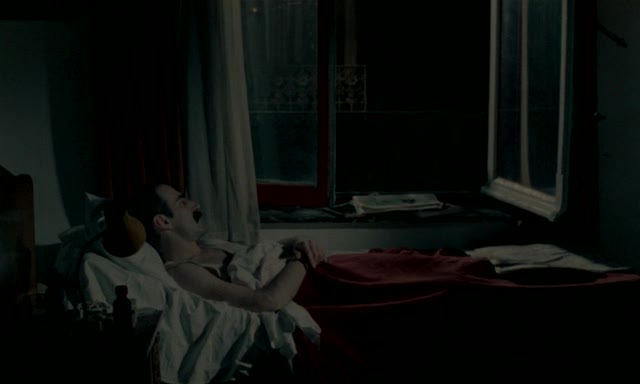 Some of the nocturnal encounters – all apparently in nondescript corners of Brussels – are more romantic and/or cheerful: a comic couple framed at adjacent café tables never face one another, for example, until they get up and fall into a parodic embrace. But Akerman’s gestural work with “mythological representations of love and desire” (as she described it in Toronto) invariably projects much of the same kind of loneliness and solitude as Edward Hopper couples, whatever the circumstances that bring these people together or isolate them in their furtive lairs. As morning arrives, the aggressive soundtrack becomes even more hectoring and brutal –- the noises of outside traffic smothering an embracing couple on a low bed like an itchy security blanket. -– JONATHAN ROSENBAUM 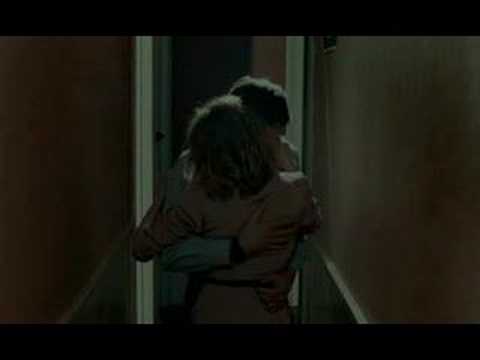