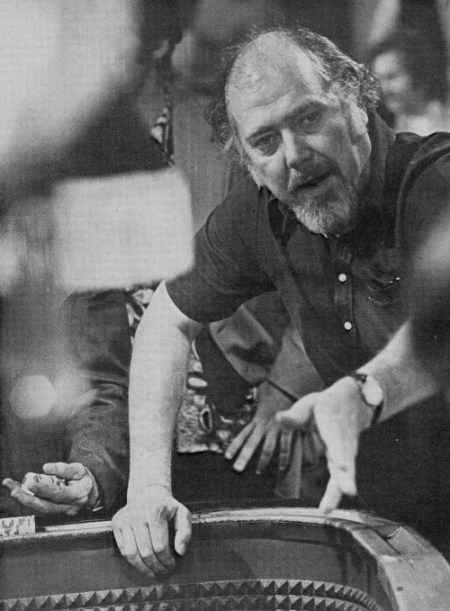 “Trusting to luck means listening to voices,” Jean-Luc Godard reportedly said at some point in the mid-1960s. This has always struck me as being one of his more obscure aphorisms, and one that even seems to border on the mystical. Yet the minute one starts to apply it to Robert Altman’s California Split, released in 1974 —- a free-form comedy about the friendship that develops and then plays itself out between two compulsive gamblers, Charlie (Elliott Gould) and Bill (George Segal), and the first movie ever to use an eight-track mixer — it starts to make some weird kind of sense.

What’s an eight-track mixer? According to the maestro of overlapping dialogue himself, speaking in David Thompson’s Altman on Altman (Faber and Faber, 2006), this is a system known as Lion’s Gate 8-Tracks developed by Jim Webb, and it grew directly out of Altman’s ongoing efforts to make on-screen dialogue sound more real. Sound mixers would frequently complain that some actors wouldn’t speak loudly enough and Altman would counter that this was a recording problem, not a performance problem involving the actors’ deliveries. Plant enough microphones around the set or on the location —- in this case, eight —- and one could always adjust the volume later, when the separate channels were being mixed together and one could decide which channels should predominate, and in which proportion. In other words, assuming that you had a certain amount of scripted dialogue and a certain amount of “background” improvs being delivered at the same time —- the modus operandi of many Altman movies, especially this one –trusting to luck was a matter of recording all this dialogue on eight separate tracks. And listening to voices was what you did afterwards-—shoot first and ask questions later, working out a hierarchy of what should have the most clarity after the fact. If an improv was funnier or more relevant than a scripted line delivered at the same moment, allow the former to overtake the latter.

Even before the title sequence starts, over the familiar Columbia Pictures logo, California Split has already started to chatter. A steady rush of talk —- telegraphed, overheard, sometimes barely audible —- spills into the opening scenes like a scatter of loose change from a slot machine, meeting or eluding our grasp in imitation of a strictly chance operation. Admittedly, the overall odds of the game are somewhat fixed because the movie has Walsh’s script, two box office favorites, and hard Hollywood money behind it. But the improvisatory spirit is unmistakable, if only because an alert audience is obliged to ad lib in order to keep up, compelled to shift its attention as often as the characters.

So using Lion’s Gate 8-Tracks was putting into practice a certain dialectic of chance and control, one of the cornerstones of Altman’s style of filmmaking. And this would become even more systematic in the movie Altman made immediately after California Split, Nashville, where instead of having just two main characters, Altman opted, at least in theory, to feature two dozen. (Some of them proved to be much more prominent than others.) And when he made A Wedding in 1978, he arbitrarily decided to double that number to 48. 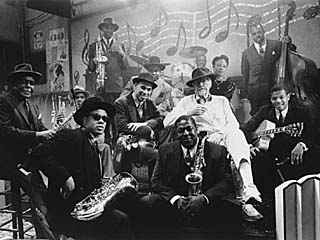 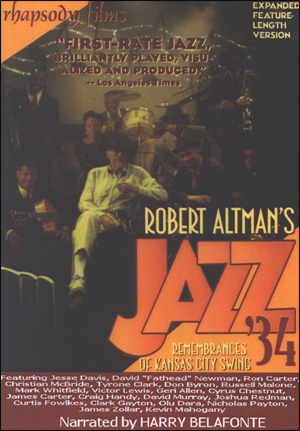 But in fact, the most apt cross-reference to California Split in the Altman canon isn’t either of those films but his lesser-known Jazz ’34: Remembrances of Kansas City Swing (1977) — a feature-length adjunct to Kansas City that featured real jazz musicians in period costume casually performing after hours in a 1934 Kansas City club. This culminates in a friendly but frenetic cutting contest between two tenor sax players trading solos, not unlike some of the riffs developed in California Split between Gould and Segal. More generally, this simultaneously relaxed and lively swing-fest, a celebration of collective euphoria, shows how deeply akin Altman’s style is to the aesthetics of improvised jazz, which at its best tends to thrive not so much through competition as through the kind of sudden inspiration that fellow players can spark in one another.

A compulsive casino gambler himself, Altman boasted, “At one time I could stand at a crap table for two days”. And he inherited “by chance” a film project scripted by another compulsive gambler, Joseph Walsh, who had been developing his script with Steven Spielberg, of all people, during his pre-Jaws phase. (Walsh was a former child actor in the 50s and 60s, prominently featured as Joey Walsh in such films as Hans Christian Andersen and The Juggler and countless TV shows; in California Split he plays Sparkie, a bookie owed a fortune by Bill.)

Of course Walsh was taking a gamble himself by trusting his script to a master doodler like Altman who favored improvs. Nevertheless, figuring out what’s prearranged in this movie and what isn’t always a simple matter, and it’s often the spirit and climate of improvisation that matters more here than anything else. The opening sequence, where Charlie and Bill first encounter one another at a poker table in a gambling hall, certainly looks and sounds authentic, but it was shot on a set designed by Altman regular Leon Ericksen, who redressed a dance hall. Most of the extras were hired from the drug rehabilitation center Synanon, although a few real gamblers were included as well, and some of the background dialogue was loosely plotted if not precisely scripted by Walsh (whose own brother Edward is featured in the pivotal role of another poker player—-a sore loser who accuses Charlie of cheating, and later beats him up). So the mix between real and semi-real, simulated and actual, is pretty intricate, and it’s only because of the DVD commentary by Altman, Walsh, Gould, and Segal that we know that Charlie and Bill’s drunken efforts in a bar, during their first conversation, to reel off the names of all the seven dwarfs were invented by the two actors.

We also know that the house that Charlie shares with two hookers (Ann Prentiss and Gwen Welles) is a real house and not a set, that most of the film was shot in continuity (so that the seven dwarfs gag could get reprised at the house), and that Altman staged both the horse race and the prizefight that the heroes attend, but also used plenty of extras at those locations who qualified as authentic. Most importantly, the mix between fiction and documentary throughout is so fully entangled that each winds up educating the other, while the multiple sound levels lead to periodic eruptions, especially in bar scenes, where peripheral characters briefly upstage and overtake the two leads, background becoming foreground and vice versa. 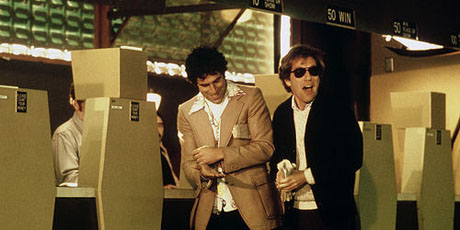 Needless to say, this resembles gambling in the number of risks and unforeseeable outcomes that are involved, and there are naturally some losses in this kind of game as well as a few winning streaks. As Altman pointed out, California Split has less plot and more concentration on character than most of his other movies; and when the story is supposed to build to a climax — after Bill rushes off to Reno to gamble his way out of debt, with Charlie in tow — it mainly dribbles off into random shtick. (We also learn on the DVD that the final scene in the movie isn’t the one that Walsh scripted.) 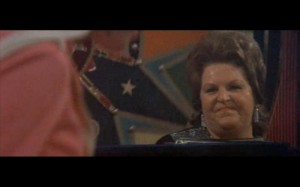 Some of the chance encounters in the movie are between the dialogue and various gritty songs that are sung offscreen by Phyllis Shotwell — encounters “staged” during postproduction by the film’s editor, Lou Lombardo. (Shotwell eventually appears onscreen in the movie at the Reno casino, belting out her numbers to her own piano accompaniment, but the fact that we start to hear her music much earlier in the movie, long before Reno is even mentioned, suggests an eerie kind of predestination, as if she were gradually pulling the two heroes towards her establishment like a magnet.)

Her lyrics usually have only the broadest relation to the action, but sometimes they draw closer in witty surprises  —- or at least they once did. Unhappily, two of the most magical conjunctions between her songs and the on-screen action vanished from the movie on its way to DVD, due to problems with music rights: “I’m goin’ to Kansas City” was originally heard over the trip to Reno, and after the heroes arrived there, Gould’s and Shotwell’s seemingly independent raps, hers heard offscreen while Charlie and Bill crossed the street towards the casino, suddenly converged on the word “nobody”, pronounced by the two voices simultaneously. But on the DVD, Shotwell’s performance in this sequence is replaced by simple instrumental music, and thanks to yet another glitch, the DVD’s commentary still alludes to the magical convergence of the two voices saying “nobody” as if this were still in the movie. (Win a few, lose a few.)

In what might be his best performance to date, Gould is a perpetual live wire. His verbal cadenzas embody his character’s free-wheeling spirit throughout the picture, for Charlie is an aggressive loudmouth forced to justify his vulgarity with invention and virtuosity, whereas Segal plays, as it were, a sort of inner-fire Miles Davis to Gould’s Charlie Parker, smoldering with brooding intensity. A similar contrast is afforded by the respective “hard” and “soft” styles of Prentiss and Welles as Charlie’s affable housemates, demonstrating a comparable kind of creative teamwork.

In both cases, you might say that feeling ultimately counts for more than thought. (“I can never think and play at the same time,” the great jazz pianist Lennie Tristano once maintained. “It’s emotionally impossible.”)  And one might also argue that it’s the ensemble that matters —- which in this movie extends even to the energy and vibes provided by the minor characters, whether they’re bit players or extras, especially in all the scenes set in bars and gambling joints. Like the listeners and dancers in Jazz ’34: Remembrances of Kansas City Swing, they prove that there’s an art to being a spectator or a participant that’s just as important in a way as the art of being a performer. And if watching an Altman movie like California Split makes you a bit of an artist and a bit of a gambler, feeling your way into what remains imponderable and unforeseeable, that’s part of what’s being celebrated.