A Time to Lie (CROSS MY HEART) 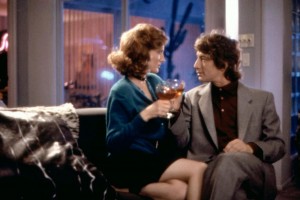 Like a 3-D movie, in which the illusion of depth is utterly dependent on the spectator’s rigidly foursquare frontal viewing position, Armyan Bernstein’s Cross My Heart is flat and fuzzy around the edges; tilt your head slightly, and the roundness of the characters vanishes immediately. But because the characters holding the center of the screen are nearly always Martin Short and Annette O’Toole — consummate pros commanding and regulating the space between and around them like two generals at a summit conference — there’s rarely any reason to look aside; our attention is riveted.

For all their charisma, one wouldn’t have thought O’Toole or Short capable of such mastery on the basis of their separate and earlier outings. Despite his frequent brilliance on SCTV and Saturday Night Live, mainly as a parodist of narcissistic TV and movie personalities ranging from Dick Cavett to Jerry Lewis (by way of Katharine Hepburn), Short was both literally and figuratively dwarfed by Steve Martin and Chevy Chase in Three Amigos, although admittedly all three amigos were mainly stranded by the anemic comic material. He fared much better as a jumpy hypochondriac in Innerspace, with a microscopic Dennis Quaid coursing and carousing through his system; but the likable gimmick of that movie, which allowed director Joe Dante to intercut between two actors, two spaces, and two intersecting plots, also stranded Short in a way, often returning him to the solipsistic format of his best TV bits, like Dick Cavett Interviewing Himself.

O’Toole has been around the movies much longer, ever since she played one of the Young American Miss beauty contestants in Michael Ritchie’s 1975 Smile (along with Melanie Griffith, who made her debut in the same film). While I missed four of her subsequent movies – One on One, King of the Gypsies, Foolin’ Around, and 48 HRS. — there’s no question that her plucky independence as “the other woman” in both Richard Lester’s Superman III and Paul Schrader’s Cat People helped to humanize a rather schematic exercise in Freudian metaphysics in each case. Perhaps for this very reason, she too stood somewhat apart from her surroundings, combining small-town wholesomeness with sexiness in contexts that were principally urban/neurotic (and, in the case of Cat People, fundamentally antisex as well). 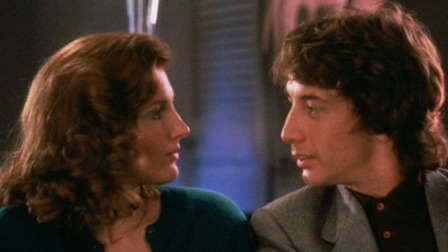 One way of judging performances is to look at what actors do before and after they deliver their lines — how they handle all the little spaces in between. In the case of Cross My Heart, a lighthearted comedy in which Short and O’Toole play David and Kathy, a couple out on their pivotal third date, such intervals are crucial, and the way that both actors fill them to the brim is one indication of just how good they are. Working together, they both surpass themselves, and the intricate ways that they inhabit their simple parts, pregnant pauses and all, keep them coasting, and us along with them. The film lasts 96 minutes, of which nearly 90 are devoted to the date; thanks to the two leads, not one of those minutes is superfluous.

As luck would have it, the worst film I saw last month at the Chicago Film Festival, Mark Deimel’s The Perfect Match, has an almost identical theme. Both movies are about the mutual deceptions of two people out on a date, each of whom fudges certain facts about herself or himself out of fear that the naked truth will be a fatal turnoff. While the couple in Deimel’s film, played by Marc McClure and Jennifer Edwards, meet through a classified ad (in the LA Reader, no less), both movies have the same overall principle and dramatic curve: the man and woman feel nervous and inadequate, but are spurred on and assisted in their lengthy preparations by their worldly confidants; the deceptions work at first, but eventually crumble; after a disastrous impasse, the couple are reunited and discover that they like each other after all.

To the extent that these movies are reflections of the 80s, one depressing aspect of them is that the deceptions are more or less taken for granted by both filmmakers. Neither the lies nor their eventual exposures are given much moral weight, as they more generally were in all the Billy Wilder comedies involving deceptions in the 40s, 50s, 60s, and 70s, from A Foreign Affair to The Seven-Year Itch to Kiss Me, Stupid to The Front Page (among several others). Ironically, while Wilder was often accused of cynicism for creating heroes who were so willing to deceive, Deimel and Bernstein — who use deception mainly in order to set up their comic situations, without expecting us to linger over the implications — are more likely perceived as normal and expedient commercial directors simply doing their work.

I suspect the differences in attitudes mainly has to do with the built-in artificiality of TV sitcoms — the same thing that, for me, made the fatuousness of Marc McClure’s delivery in The Perfect Match, like the pasteboard characters and mechanical gag setups, so unbearable. If Short and O’Toole had been unlucky enough to find themselves in Deimel’s film, the falsity of their surroundings might conceivably have sunk them without a trace. What they get instead are all the advantages of concentration: a movie shot mainly in sequence, which allows Kathy and David and our perceptions of them to grow organically, and a respect for the unities that doesn’t quite make the film’s time equal to real time, but at least puts the two within hailing distance of one another. 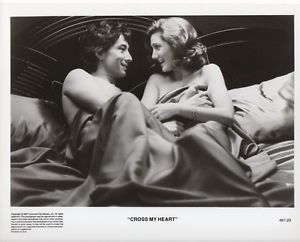 As suggested above, the script for Cross My Heart, by director Bernstein and Gail Parent, isn’t entirely free of sitcom reflexes either, but at least they aren’t allowed to get in the actors’ way and twist them out of shape. The remarkable thing is how much mileage Short and O’Toole are able to get out of so little. The strategy of Bernstein’s script for One From the Heart, whereby all the characters are universalized into everyman and everywoman, is still somewhat in force here. (A rare exception is when David sits down at the piano and accompanies himself doing Martin Short’s Montgomery Clift impersonation; equally out of character, Kathy responds by saying, “I’m not sure who that was.”) This generalization of characters has a certain logic in a movie whose humor is chiefly based on recognizable, archetypal situations (example: David, alone in the kitchen, reaches into his underpants to rearrange his privates, and Kathy enters the room), but it has the unfortunate consequence of making both characters insubstantial, almost nonexistent, beyond the borders of their date.

What, after all, do we know about Kathy and David? We know that Kathy has a seven-year-old daughter named Jessica (whom we see briefly) and an addiction to cigarettes, neither of which she wants David to know about. We also learn early on from David that she has her own business, but the movie never gets around to telling us what that business is. We know that David has just been fired from his $30,000-a-year job as a sunglasses salesman, that his car is in the shop, and that he’s embarrassed about his nondescript apartment. His friend Bruce (Paul Reiser) offers to lend him his new Lincoln Continental and the keys to his fancy new apartment, which gives David three things to hide from Kathy. But given the little else that we know about him, there are surely more than three things about him that the filmmakers are hiding from us.

In short, everything in the movie exists only in relation to the date. The other characters — Bruce, Kathy’s sister Nancy (Joanna Kerns), Jessica, a guy who steals Bruce’s car by posing as a parking attendant, an irate neighbor of Bruce’s who wields a gun — are peripheral and awkward props at best.

Given these rigorous limitations, why does the movie work as well as it does? More precisely, how does it work at all? A significant clue is offered by Kathy when she says to David, “Life begins to look like an audition . . . You’re auditioning too, aren’t you?” She makes this point after telling him that she wants to be sure there’s some future in their relationship before they have sex, that she needs a “semicommitment”; David responds by scrawling her name and phone number with a marker on Bruce’s wall. But in fact her point about auditions would be equally pertinent at any stage in the proceedings. Dating, in the film’s terms, is a perpetual tryout; no wonder deceptions are adopted by both of them as second nature. And the notion of a test persists not only through all the banter and foreplay, but during and after their sex to boot: there’s a particularly funny stretch devoted to evaluating the precise degree and nature of Kathy’s orgasm — a task for her to perform as well as him. As actors, O’Toole and Short know what tryouts are all about, and their characters’ performances for one another are intimately connected — though scarcely identical — to their performances as actors for us.

Performance is largely a matter of seduction, and seduction generally proceeds by indirection. Kathy, who repeatedly tells David that she doesn’t want to be rushed, is already remarking to Nancy in the first scene that she must like David, because she’s shaving her legs above the knees; soon afterward, we learn that she’s packing her diaphragm, and she later proves to have condoms in her purse as well. (Apart from this nod to safe sex, the film aims at being contemporary without being especially topical.) But each aggressive move she makes toward David is countered and/or covered by a demurral — suggesting that they go to his apartment after ruling the possibility out, initiating their first kiss right after explaining why she doesn’t want to lie down on the bed. (Significantly or not, a similar duplicitous pattern is detectable in the hero’s girlfriend in Bernstein’s only previous film as writer-director, Windy City.)

If Kathy’s acting is mainly a matter of doing, David’s performance is more often a matter of being — such as the elaborate improvisations required to adapt himself to Bruce’s tacky and show-offy apartment, which he has never seen before. “Daters are liars,” he declares to Kathy after their covers are both blown, “what do you want?” Actors are liars, too; and the question that remains is, what do we want?

The tricky thing about acting over a void is filling up all the existential uncertainties that gape in between all the words and gestures, a problem for the actors as well as the characters. Paradoxically, while the characters in Cross My Heart never let us forget those uncertainties, Short and O’Toole charge ahead as if their own uncertainties didn’t exist — a tribute to their capacity to do two things at once. 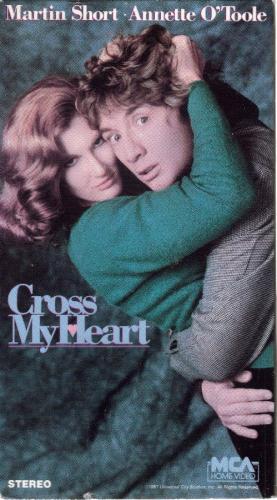 Jonathan Rosenbaum screwed up in his review of the movie Cross My Heart ["A Time to Lie," November 20]. Rick Moranis, not Martin Short, portrayed the unctuous and egocentric Dick Cavett on SCTV, including the SCTV skit in which Cavett interviewed himself, which was one of the most brilliantly conceived, written, and performed moments in the history of television. Short was probably backstage at the time, playing Kate Hepburn rearranging her privates.