A Touch of Class [GOSFORD PARK] 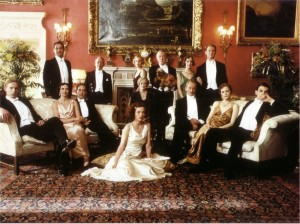 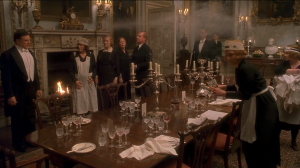 Critical consensus about any movie is impossible, but judging from end-of-the-year polls, Robert Altman’s Gosford Park is widely recognized as a masterpiece. Perhaps because the English period setting and the mainly English cast encouraged the septuagenarian Altman to curb many of his smart-alecky tendencies, he can finally be credited with something resembling a mature comedy-drama — that is to say, a measured and balanced one — for the first time since the 70s.

For all his many accomplishments, Altman sometimes doesn’t know when to stop underlining dramatic points, or exposing the silliness and vanity of his characters, or piling on miniplots. This makes it all the more impressive that he’s now given us a beautifully proportioned work in which 30 fairly well defined characters don’t seem excessive, most of the plot points aren’t hyped, and the director’s ridicule, while far from absent, isn’t allowed to dominate our own responses.

More is probably going on here than we can possibly absorb in a single viewing, and this quality — the sense that what one gets from Gosford Park is partially a function of what one elects to notice — is one piece of Altman’s method that has always seemed attractive. Notably, this time the bounty of material is handled with lightness and confidence, minimizing the sense of overload and hectoring that has hampered his other densely populated features — epitomized by the rhetorical uses of an American flag toward the end of Nashville, the pretentious or mock-pretentious uses of music in A Wedding, and an overreliance on 11th-hour violence to goose the dramatic effects of these and many other films, including The Long Goodbye and Short Cuts. Gosford Park may pivot on the intrigues leading up to and following an old-fashioned murder, but part of the surprise is that Altman keeps the murder offscreen and generally soft-pedals the dramatic significance of who committed it. The use of murder, assassination, accidents, natural disasters, and the like in many of his previous films typically strains for effect, but here his evocations of Agatha Christie whodunits are deliberately tweaked, undermined, and deviated from.

This doesn’t mean one can justify the comparisons some critics have been making with Jean Renoir’s The Rules of the Game – comparisons Gosford Park encourages with details such as a rainy 30s setting, a country estate and hunting party, and a focus on guests and servants alike. It’s true that Altman’s overall ensemble methods — which typically meld the materialist experience of making a film with the illusionist experience of watching one — parallel Renoir’s aesthetics in certain respects. Even Altman’s practice of shooting much of his action with two cameras can be linked to Renoir’s TV-inspired use of multiple cameras in the late 1950s, while his tendency to keep these cameras moving (resulting in a prowling effect that harks back to The Long Goodbye) adds to the Renoir-like feeling that more is going on in this fictional world than one could possibly encompass. But duplicating or approximating some techniques and attitudes can’t make the adroit but fundamentally unthreatening Gosford Park a plausible match for a supreme French masterpiece whose relevance in 1939 led to a violent and disastrous reception. By the same token, the allusions to Jacques Tati’s Monsieur Hulot in Stephen Fry’s inept and unobservant police inspector — pipe, raincoat, body language — don’t point toward any larger strategy to emulate Tati stylistically.

So let’s not overburden Altman with points of reference he can’t live up to or sustain in any meaningful fashion. The merit of Gosford Park, apart from its impressive ensemble acting and mise en scene, is its smartness about the relations between servants and their employers, not its insights into the nature of either class (which The Rules of the Game has in abundance). 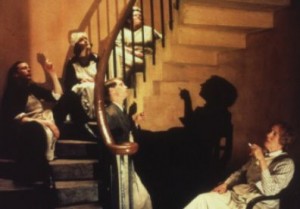 This smartness is clearly enhanced by a ground rule that governs the presentation: as the action moves “above stairs” and “below stairs,” no guest is ever seen unless a servant is also around. Since the visiting servants, those who’ve come along with the weekend guests, are identified in the downstairs quarters by the names of their employers — a ploy that makes it easier for everyone, including the audience, to identify them — the ground rule both inverts and balances this routine eliding of identities, showing us how the servants know considerably more about what’s happening than anyone else. The character who probably comes closest to representing the audience’s point of view is Mary Maceachran (Kelly Macdonald), a visiting servant who works for Constance (Maggie Smith) — a countess whose character is in some ways the furthest from the audience’s point of view — and the differences in their practical knowledge are an ongoing theme.

We ultimately discover more about the servants than we do about their employers, which is also intentional: Altman notes that out of the ground rule “came the idea that the audience would get snippets of information about above-stairs people — but not all of it, and what there is would be transmitted by below-stairs gossip, sometimes contradictory.”

More generally, the ground rule presupposes a moral commitment to the servant class that determines much of what we see. Such a commitment helps to suggest in turn all that Altman gained by coming into contact with the values of the English stage — through not only the virtually all-English cast and setting but also the talented screenwriter, Julian Fellowes, whose background is substantially that of an English actor.

Let me elaborate on this. The first encounter I had with the London theater was a last hurrah for Noel Coward in the mid-60s, consisting of three one-act plays he wrote and starred in. It was a revelation insofar as plot, the mainstay of American theater, was little more than skeletal and notations on quirky character traits were just about everything. The audience was clearly primed for such a display and laughed complicitously throughout at Coward’s juicy one-liners, which weren’t so much gags as behavioral bumps in a context of patter and repartee. Pleasure was derived almost entirely from small observations and glancing inflections, a notion of drama that was substantially different from what I’d become accustomed to in American theater. The principal drift of this sort of English theater was what critic Manny Farber once called “termite art” — an art concerned mainly with its own boundaries and rules rather than with overarching “statements” that reek of significance, something Farber pejoratively termed “white elephant art.”

Writing for Francis Coppola’s long-defunct City magazine in 1975, Farber, who showed some interest in Altman on other occasions, skewered Nashville for its snobbish contempt for country music and for its white elephant trappings: “an Airport (1970) or Grand Hotel (1932) structure pretentiously convoluted so that it is an epic poem about disillusioned Americans.” Significantly, the press book for Gosford Park includes an elaborate who’s who indicating not only the rank and position of some characters but the snobbery of a few of them: Lady Sylvia McCordle (Kristin Scott Thomas), whose husband (Michael Gambon) owns Gosford Park, is a “titled snob”; Raymond, Lord Stockbridge (Charles Dance), is simply a “snob,” though his wife Louisa (Geraldine Somerville) isn’t one. Ironically, snobbery of one sort or another is behind most of the ridicule found in many of Altman’s white-elephant-art pictures, and its relative absence here might be attributed in part to the termite art of English actors.

I should note that Altman’s appropriation of some of the traits of English theater, imbibed through his screenwriter and actors, has a downside. He shares with character-based theater a taste for sudden revelations, yet he doesn’t allow for the fact that these coups de theatre don’t always function on-screen as they do onstage: a plot turn that we find convincing or at least acceptable in a play may not work that way in a movie. Consequently, I can buy the delayed discovery that one of the servants is having an affair with Lord McCordle, but the way she suddenly and inadvertently betrays this secret in public smacks more of stage convention than believable absentmindedness. Other turnarounds in the plot are similarly problematic, to greater and lesser extents.

Realism, of course, has never been Altman’s strong suit, despite his penchant for defying genre conventions in the interest of some higher truth. Gosford Park may mock the conventions of English whodunits, but it’s generally so attentive to the conventions of the English stage that other forms of verisimilitude are routinely sacrificed to them.

It seems pertinent that Altman has shown a career-long love of and respect for actors as well as a pronounced fear of and contempt for most critics. These attitudes were flagrantly displayed when he recently accepted the New York Film Critics Circle’s best-director prize at a gaudy bash I attended. Openly bemused by being honored by critics, he noted that he was surrounded by friends, meaning many of the actors and scriptwriters and producers who were there; he seemed to regard members of my somewhat tarnished profession as crooked cops and himself as an honest cop overseeing actors, all of whom qualified as good citizens.

Maybe as a self-styled critic of movie genres and social pretensions, Altman regards his reviewers as competitors of some kind, but the mistrust seems to run deeper than that. Perhaps his adolescent sense of rebellion, which critics habitually scold him for, is responsible for this enmity. In any case, it seems significant that having finally got around to disciplining himself, he’s been moved to it by actors and actorly conventions. Bob Balaban — the only prominent American actor in the cast, who plays an American film producer — reportedly came up with the initial idea for the film, and most of the other forms of inspiration and discipline seem actor related as well. (Similarly, the actors are disciplined in their improvised small talk by the constraints of the 1932 setting.) 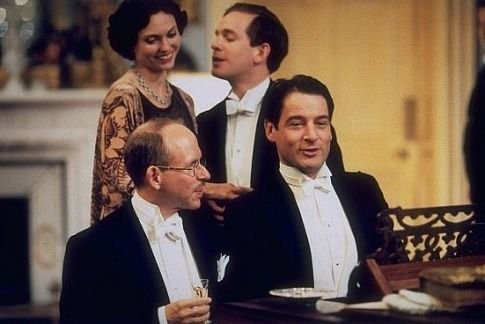 The only character in the story based on a real person, Ivor Novello — the English matinee idol and composer, gracefully played by Jeremy Northam — is an actor, and the use of biographical details about him in the dialogue, proposed by Altman, functions as one kind of discipline; the performance of a few of his songs while the murder is taking place offscreen structures the entire sequence and might be said to function as another kind. (Novello starred in two silent Alfred Hitchcock pictures — Downhill, which he cowrote, and The Lodger – and the 1932 remake of the latter, which he also starred in, is alluded to in the dialogue. Novello arrives at Gosford Park as the friend of the Hollywood producer, and a more limited use is made of a real film called Charlie Chan in London that the producer is preparing.) 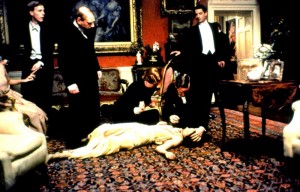 My favorite Altman film is still McCabe and Mrs. Miller (which also focuses on the inner workings and separate classes of a relatively closed and remote community), followed by The Long Goodbye (in spite of its forced ending) and California Split (in spite of its casual homophobia) — all three released in the early 70s. (Nashville also has many charms and strengths, along with its guff about America in general and Nashville and country music in particular.) In time, Gosford Park may join this list. The worlds of the earlier pictures are defined in part by absences and deficiencies — by the isolation of characters from one another, by a sense of unsettled and unfulfilled lives. Nothing quite so metaphysical is on display in Gosford Park, but the empirical English virtues provide a nice alternative.