I’ve been getting a lot of pleasure lately from the new Blu-Ray Mel Brooks box set, especially in catching up with the two Brooks features I hadn’t seen before, The Twelve Chairs (1970) and Silent Movie (1976). The only gaping absence for me in this deluxe collection isn’t so much The Producers (1968), his first feature, and certainly not his most recent and weakest, Dracula: Dead and Loving It (1995), but Life Stinks (1991), which in retrospect I may have underrated — and which Kino Lorber is bringing out this July. Which is largely why I’m resurrecting my mixed review of it. This originally appeared in the Chicago Reader’s August 2, 1991 issue. — J.R. 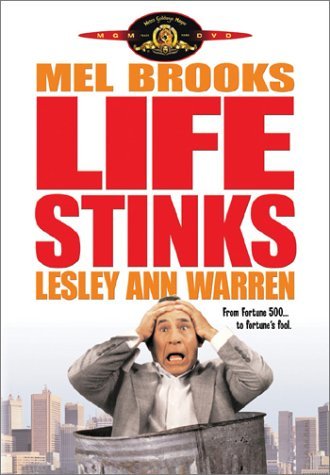 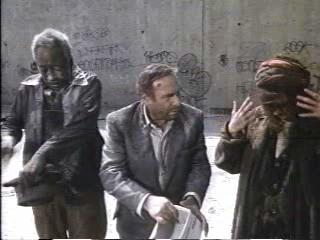 “Tragedy is if I cut my finger. . . . Comedy is if you walk into an open sewer and die.” —Mel Brooks

For a long time now Mel Brooks has been one of my guilty pleasures. It’s difficult to refute the protestations of friends and colleagues about the general feebleness of History of the World–Part I and Spaceballs — his previous two features as writer-director, and the only ones that appeared in the 80s — but there are moments in both films that I deeply treasure, not so much as evidence of a writer’s, director’s, or performer’s craft, but rather as moments that make me laugh hard and long and make me feel good afterward. (Moments that come to mind are the “Inquisition” production number in History of the World–Part I and the surreal episode in Spaceballs when the characters consult the already-packaged video of Spaceballs to determine what they should do next.)

I fully concede that Brooks’s borscht-belt vulgarity, his childish obsession with scatological gags, his awful taste in puns, his sloppy plots and camera setups, and his hit-or-miss attitude toward gags all make his comedies fairly shaky vehicles. Yet all his movies leave me with a sense of maniacal gusto that I think I treasure precisely because it doesn’t seem very contemporary. Even Brooks’s apparent lack of control is a guarantee of authenticity; when one of his random gags manages to achieve a kind of surreal profundity, like the line at the beginning of this review, it’s a profundity that seems earned because it’s arrived at intuitively and almost accidentally, like a triumph of Zen archery.

In fact, what seems especially precious about Life Stinks — a comedy about the homeless, and not one of Brooks’s best — is how beautifully and movingly out of date it is. I know we’re all supposed to be concerned constantly and exclusively with “now,” especially when it comes to Hollywood movies; the marketplace decrees that, and we’re expected to follow its dictate without complaint, like trendy, up-to-date sheep. But if this summer’s batch of entertainments is anything to go by — and contemporary wisdom and insight is what’s to be gleaned from Terminator 2, Boyz N the Hood, Regarding Henry, The Doctor, V.I. Warshawski, and Mobsters — I confess I’d rather be somewhere else, preferably sipping iced tea and laughing at Mel Brooks.

It might seem too generous to call Life Stinks Brooks’s version of Sullivan’s Travels, but the parallel is hard to avoid. Though the motives that propel Preston Sturges’s and Mel Brooks’s wealthy heroes voluntarily out of their mansions and into the ranks of the homeless are not even remotely the same, both heroes undergo a moral education through their poverty — especially after it becomes involuntary. Sullivan’s Travels arrives at a clear moral position about the relation of the rich to the poor, while Life Stinks disintegrates into an incoherent if good-natured barrage of half-assed bromides, a finale that evades nearly every question it manages to stumble over. (Charity is the basic thrust of the solution to the problems posed, but when hero and heroine drive off at the end, it’s significant that we haven’t the foggiest notion of where they could be going.) 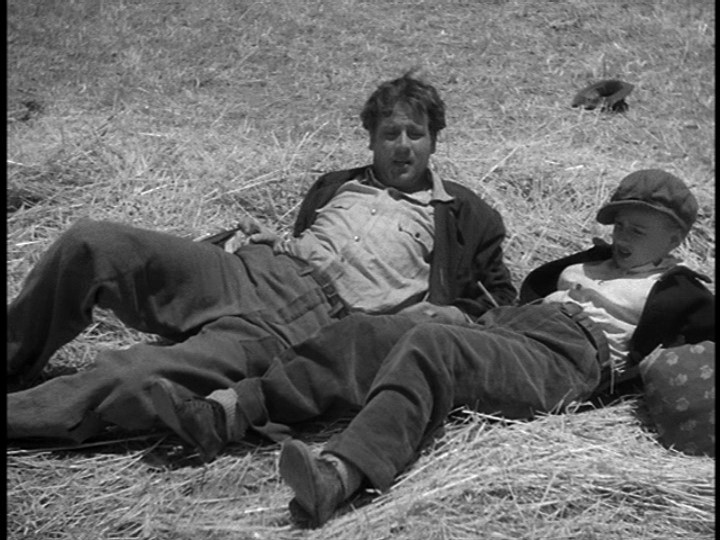 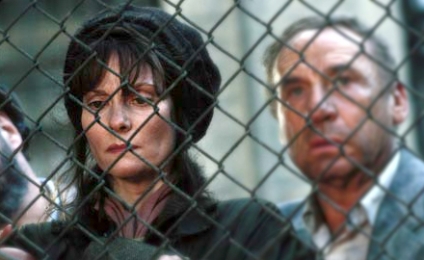 What these two films truly share is a particularly sharp sense of the Depression. Sullivan’s Travels, released in 1941, looks back on that era from a short distance, while Life Stinks is appearing a full half century later. This may make Brooks’s vision archaic, but it’s archaic in an indelible, luminous, and instructive way. Born in a Brooklyn tenement in 1926, Brooks is clearly marked by the Depression — perhaps in part because his father died half a year before the stock market crashed. He has a lot to tell us about the emotional essence of that era, and he tells it with a vividness we wouldn’t find in most history books.

Ironically, most 30s movies seem to give us a less immediate sense of what Depression poverty was like, perhaps because they were designed precisely to make Depression audiences forget about their impoverished lives. The closest thing to Life Stinks from the 30s that comes to mind is a particular favorite of mine, the 1933 Al Jolson/Rodgers and Hart musical Hallelujah I’m a Bum — a bittersweet fantasy about the homeless and the rich that owes some of its conceits to Chaplin’s 1931 City Lights but that strikes me today as anachronistically having more to do with a 60s sensibility. 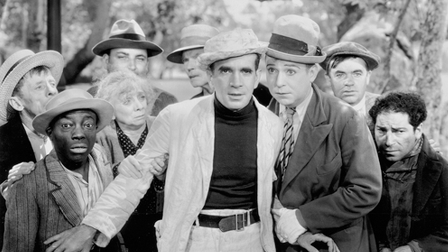 If the characteristic 60s attitude about poverty is some form of Thoreau-style idealism, the primary 30s attitude is chumminess, human warmth in the midst of adversity. As critic Manny Farber once pointed out while comparing the human iconography of movies in the 30s and the 70s, in the 30s “every shape was legitimate” — you could be fat, short, or a legless dwarf (like the cheerful one Brooks employs climactically in Life Stinks) and still be OK, still be an ordinary person. You didn’t have to look for identity exclusively in some relative organizational abstraction like ethnicity; sometimes being human was enough. Only in the 70s and afterward were you expected to jog and work out and make yourself look like everybody else and feel mortified if you didn’t succeed; looking like Schwarzenegger or Cruise wasn’t always the ticket that entitled you to membership in the human community. And arguably, only during the last 20 years have you been obliged to be part of a “special interest group” to belong in the larger scheme of things; before that you might have been marginalized, but at least you were a member of society at large.

Perhaps I’m being a 60s idealist myself when I speculate about a Depression that was over many years before I was born. But it seems to me that people were nicer to each other then, and nicer about each other, perhaps because there was a certain sense of shared adversity — and they weren’t necessarily less intelligent or hip because of this attitude. In any case, this idea helps to account for the most implausible part of Life Stinks, that Goddard Bolt (Brooks), the billionaire hero, soon finds loyal friends among the homeless after he agrees to spend a month in a ghetto on a bet with a business rival (Jeffrey Tambor). (Each wants to develop the two-and-a-half square miles into a complex named after himself.) In quick succession Bolt meets Sailor (Howard Morris), Molly (Lesley Ann Warren), and Fumes (Teddy Wilson), and before long the four are inseparable, a virtual family without common ethnic, racial, or gender ties who even sleep in adjacent crates and cartons. It’s a 30s solution to an 80s and 90s problem, and in contrast to the 60s and 70s solutions that still assail us from every corner, it’s naive only on the shallow level of our contemporary conceptions; underneath it seems refreshingly savvy, even shrewd in its overall sweetness. It tells us how a rich man like Brooks might try to cope with homelessness, and how we might ourselves. “Political correctness” has nothing to do with it.

This is a dumb movie in some ways because it harps on the obvious, ends certain scenes inconclusively with awkward fade-outs, and only suggests development in the characters without bothering to spell it out. But it’s a movie with heart and sincerity, and there aren’t many of those around. When critics applaud movies about “moral improvement” as blatantly insincere and phony as The Doctor and Regarding Henry — movies where narcissism and yuppie tunnel vision serve as both the opening premises and the desired end points — it seems that even a klutz like Brooks has something to teach us. Even if he’s only amusing us, he’s doing it with a human face. 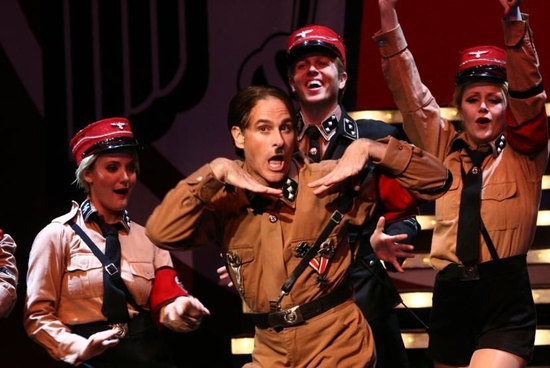 I’m not trying to offer up the 30s as the only route into what I like about Life Stinks. When Brooks turns to his specialty, the big-scale musical number in unlikely circumstances — the aforementioned “Inquisition,” and “Springtime for Hitler” in The Producers, and here a charmingly modest pas de deux with Brooks and Warren, danced to “Easy to Love” in a warehouse of rags — his model seems closer to minor MGM musicals than to Astaire and Rogers, even though they probably inspired it. When he gets good laughs out of Sailor’s “excremated” ashes blowing in his friends’ faces, he’s just being Mel Brooks. And when he’s focusing on feet in the opening sequence, he could just as well be serving up another Hitchcock homage left over from High Anxiety (though much later in the film he brings back the feet motif in a manner that literally and hilariously lampoons 30s film rhetoric).

Indeed, the most hysterically funny portion of the film has only a glancing relation to the 30s. It consists of a now genuinely destitute Bolt encountering another tramp (cowriter Rudy De Luca), who calls himself J. Paul Getty and who insists he’s richer than Bolt. What begins as a measured disagreement on Bolt’s part (“Now look, let’s be reasonable — there’s an enormous difference between us”) and a friendly sparring about precise figures (“I amassed $6.4 billion” “I amassed 6.5”) eventually evolves into a slapping session straight out of the Three Stooges — a group that formed before the Depression but flourished long after. It’s run-on low comedy with a wisdom of its own about what it really means to be rich (or poor), and Brooks manages to stretch it out inordinately, all the while making it funnier and funnier. It’s materialist comedy in the best sense of the word, and when it leads to slapstick involving Thorazine in an overcrowded hospital, Brooks truly hits his stride. For joyful moments like these, I can happily settle for the scattershot effectiveness of the rest.