All The Vermeers In New York

Jon Jost’s ravishing independent feature about art, money, and loneliness in Manhattan — beautifully shot in ‘Scope by Jost himself and with a wonderful, Gil Evans-ish big-band jazz score by Jon A. English — can be viewed as a kind of companion piece to Jost’s earlier Rembrandt Laughing (1988), which dealt with several friends and acquaintances over several months in San Francisco. The main characters here are three young women who share a spacious apartment — Emmanuelle Chaulet (from Rohmer’s Boyfriends and Girlfriends), Katherine Bean, and Grace Phillips — and a Wall Street broker (Stephen Lack) who loves the Vermeers in the Metropolitan Museum. As in Jost’s other features, the narrative is elliptically constructed — the film seems more concerned with evoking a place, time, and milieu than with a dramatically shaped story — but there’s still a lot of lyrical passion and drama in the sounds, images, and characters themselves (1990). (JR) 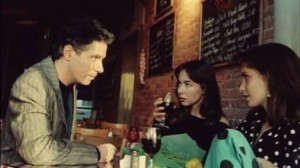