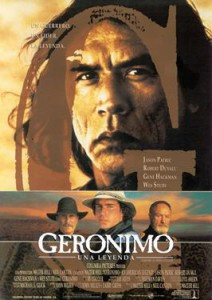 Like Unforgiven, this is conservative revisionism with a rare bitterness of tone (1993). The subject here is the underhanded treatment of Apaches by the U.S. government, and perhaps because of where it’s coming from it’s a lot more convincing as history than liberal revisionist westerns like Dances With Wolves. Though the director is Walter Hill, the dominant personality is John Milius, who wrote the story and collaborated on the script with Larry Gross, and despite some narrative stodginess in spots, Milius’s sense of warrior nobility and his talent for writing juicy parts for actors serve the picture well. Recounting the final rebellion and surrender of Apache leader Geronimo in the 1880s, the film offers especially fine performances by Robert Duvall as a grizzled Apache scouter, Cherokee actor Wes Studi as Geronimo, and Jason Patric as a U.S. cavalry lieutenant assigned to bring Geronimo in, and Gene Hackman, Matt Damon, and Kevin Tighe are more than adequate in less showy parts. The Utah settings are spectacular, and the music is by Ry Cooder. (JR)