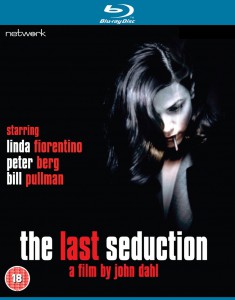 Linda Fiorentino proudly and impressively mounts the throne of bitch noir goddess in this 1994 feature directed by John Dahl (Red Rock West) from a Steve Barancik script. There’s really not much to keep the picture going apart from her unbridled ruthlessness, but there’s plenty of fun to be found in that delectation alone. After goading her husband to pull off a dangerous drug deal and then running off with the loot, leaving him to the mercies of a deadly loan shark, she picks up another unsuspecting (if ambitious) fall guy in a small-town bar and schemes some more. Unlike the classic noirs, this is grounded in neither a recognizable social reality nor a metaphysical sense of doom — just a lot of sexy attitude, humping, and heavy breathing. But it’s an entertaining and caustically humorous thriller if you like that sort of thing. With Bill Pullman, Bill Nunn, Peter Berg, and the ever-reliable J.T. Walsh. 110 min. (JR) 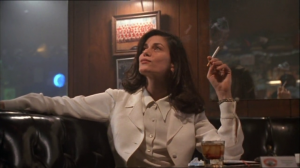