Written in late 2006 and published in Discovering Orson Welles the following year. — J.R. 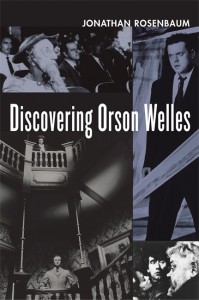 The process-oriented methods that permitted at least four Welles features and a number of short works to be left unﬁnished are easier to understand than they would be if we adopted the mental habits of producers, which is exactly what more and more critics today seem to be doing; but that is no comfort to those of us eager to understand, and eager as critics always are to have the last word, which we are not about to have with this ﬁlmmaker. At least our direction, as always, is laid out for us: as long as one frame of ﬁlm by the greatest ﬁlmmaker of the modern era is moldering in vaults, our work is not done. It is the last challenge, and the biggest joke, of an oeuvre that has always had more designs on us than we could ever have on it.

Bill Krohn’s cautionary words in Cahiers du cinéma’s special “hors série” Orson Welles issue in 1986 offer a useful motto for the present collection of essays, whose own title, Discovering Orson Welles, suggests an ongoing process that necessarily rules out completion and closure — the two mythical absolutes that Welles enthusiasts and scholars seem to hunger for the most.… Read more »

This month the Film Center is inaugurating a monthly “Music Movies” series, five programs that will play on Sundays and Thursdays. The focus in August is jazz films, and the programs include four classics I first saw years ago and four others I’ve just seen for the first time. The worst film in the bunch (Cannonball) happens to be the newest one, and the two most interesting (Cry of Jazz and Black and Tan) are the oldest, though I don’t see any particular trend in this.

It’s difficult to speak of any consistent evolution or devolution in jazz films, because each one is the product of a particular taste and sensibility. One rule I use when evaluating these films is how much we’re allowed to follow the music. Another rule, less obvious and more purist, is how important the on-screen listeners are — which matters a good deal, because jazz at its most exciting is a collective experience involving the audience as well as the interacting musicians. If the people on-screen aren’t seen listening when music is being played, we’re discouraged from listening intently.

This helps explain why I was driven batty by the new 23-minute video about Cannonball Adderley, a musician who has given me a lot of pleasure.… Read more »