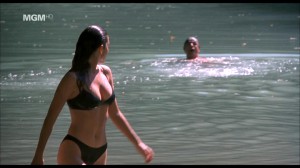 Considering that the script for this 1990 movie (by the late Charles Williams and his wife Nora Tyson, adapted from Williams’s novel Hell Hath No Fury) was in development for about 30 years and that the film is Dennis Hopper’s worst as a director, this is still pretty enjoyable as a piece of campy sleaze — especially for the first half hour, before the storytelling starts to dawdle. There’s a score by John Lee Hooker and Miles Davis, who pursue waspy duets, and Hopper’s eye for color and composition is as sharp as ever. But even if one overlooks the noirish misogyny (no easy matter), the story is still an overheated hoot. Just when one hopes that the scumbag characters — including a footloose hustler (Don Johnson) who sidles into a job as a car salesman in a sleepy Texas town, his boss’s sexpot wife (Virginia Madsen), and a seedy, bemused banker (Jack Nance) — will develop beyond their cliches, they become even sillier. And the apparently innocent accountant (Jennifer Connelly) who becomes entangled in the morass isn’t any more believable. Some may view the film’s liabilities (e.g. the inexpressive Johnson filling the foreground like a block of wood) as assets and coast along with the steamy sex, but it’s still pretty slim pickings from the man who once made Out of the Blue. (JR) 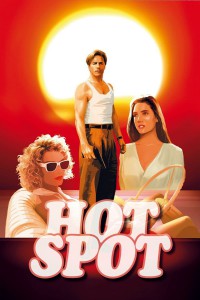