Liberals in Hiding [RUNNING ON EMPTY] 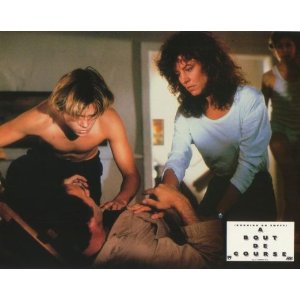 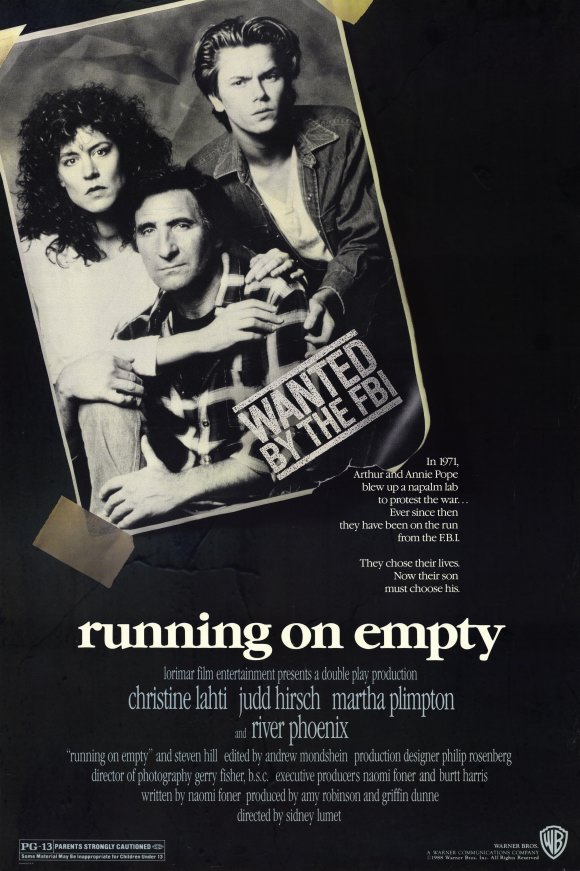 It’s a truism that the distant past is easier to see clearly than the more recent past, so it shouldn’t be too surprising that current movie depictions of the 40s and 50s — Tucker, to name just one — tend to be more accurate, at least about the dreams and fantasies of those periods, than movies about the 60s and 70s. Paul Schrader’s recently departed Patty Hearst offers a salient case in point: it can only broach the early 70s through a sitcom or comic-book reduction of the way that radicals talk and think — a myopic 80s reading of the period that leaves a number of gaps in the picture. Schrader fills in some of these gaps by clever employments of style and attitude, the stock-in-trade of any current music video, but in the end one huge gap remains: Who was Patty Hearst? What was the Symbionese Liberation Army? Why should anyone be concerned with them? The attention-getting nowness of the film blots out any possibility for history or social observation; just as Schrader’s earlier Mishima seemed to have more to do with Las Vegas than with any reading of Japanese history or culture, his take here on 60s/70s radicalism seems mired exclusively in the preoccupations of the present.

Two recent movies that actually manage to catch a recognizable whiff of the 60s/70s zeitgeist, Candy Mountain and Running on Empty, suffer from an almost opposite problem: far from being stuck in the present, they seem not to belong to the present at all. Planting one foot apiece in the past and future, they become spectral and relatively static presences in the here and now, even though that’s where both supposedly are set. The present of Sidney Lumet’s Running on Empty is, in effect, little more than the past of two 70s radicals combined with the future of one of their sons. The couple, Annie and Arthur Pope (Christine Lahti and Judd Hirsch), have been living “underground” for 15 years, ever since they helped to bomb a napalm laboratory, accidentally blinding a janitor. The older of their two sons, Danny (River Phoenix), now 17, has to “break ranks” with them and strike out on his own if he wants to realize his own potential (his love life and his gifts as a pianist). The conflict is expressed and eventually overcome exclusively in family terms, which is to say that from an 80s perspective, politics never come into it at all; yet from a 60s/70s perspective — the viewpoint of Arthur and Annie, who come from and still embody a time in which politics were a family matter, and family matters were above all political — politics are very much at the root of the issue.

Like others of Lumet’s 80s efforts, including The Verdict (1982), Daniel (1984), and Garbo Talks (1984), Running on Empty is a soap opera aimed at liberals — a supposedly extinct species that may actually only be hiding, like the family in the movie, a “silent majority” to replace the one that smoldered during the Kennedy and Johnson years. While it’s surely a tribute to Lumet’s deftness with actors that this movie is attracting an audience during a period in which “liberal” and “radical” are supposed to be dirty words — along with stock McCarthyite epithets like “card-carrying ACLU member” — I can’t believe that the first-rate acting in this movie is the only reason for its success. The clear public preference for Running on Empty over Patty Hearst (despite the clever and chic stylishness of the latter) also suggests that a liberal audience is actually being served, and even honored in the process, by Lumet and screenwriter Naomi Foner. 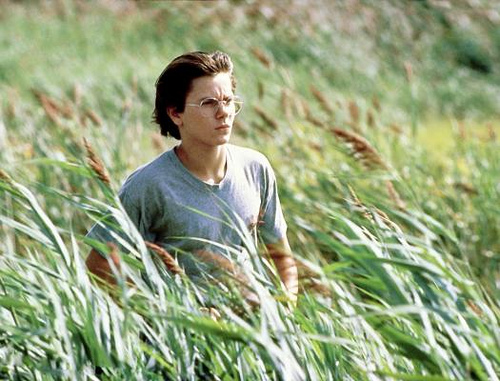 How that audience is being served and honored, on the other hand, is principally with nostalgia, the curse and boon of the American left, the same commodity that gave Lumet’s previous liberal weepies their exchange value. It’s true, of course, that the movie’s central character is Danny, an 80s teenager, and not his parents. All of the movie’s most decorous framing, and the artiest lighting effects in Gerry Fisher’s handsome cinematography, are lavished on him. His features are lighted like those of Adonis as he lies in bed. His sensitivity — as he caresses the keys on his music teacher’s grand piano, for instance — is caught like a delicate caged bird. The camera’s hagiographical treatment of River Phoenix may get a little sticky in spots, but it’s one indication of his talent as an actor and Danny’s depth as a character that the movie usually gets away with it. And part of the uninsistent beauty of Foner’s screenplay is that it doesn’t take the usual tack of treating separate generations as mutually exclusive entities. Danny’s character is less a refutation of his parents’ values than an embodiment of them; he might even be said to represent a second chance for them to prevail, in another period and context.

The weaknesses of the film are twofold: an inability to convey any convincing grasp of the present beyond the family’s present (and ongoing) situation, and a belt-and-suspenders heavyhandedness that has always been Lumet’s biggest stumbling block in driving home a dramatic climax. To take these objections in order:

(1) When Danny attends his first day of school in the New Jersey town where most of the action is set, he turns up at a music class that is already in progress. The teacher (Ed Crowley), in order to illustrate a lesson about rhythm and tempo, plays two records in succession, a Madonna single and a piece by Beethoven. When he puts on the Madonna record, a black couple in the class immediately get up to dance in front of the teacher’s desk in a carefully rehearsed, showy manner. The effect is about as natural and spontaneous as what you’d expect to find in a Sam Katzman quickie like Don’t Knock the Rock, and the shocking fact that Lumet expects us to accept this as a realistic depiction of something that might happen in a contemporary classroom helps to underscore the whole movie’s slightly anachronistic and out-of-kilter feel. This feeling comes to the fore whenever the film strays very far from the Popes as a unit; they seem to inhabit a privileged out-of-time zone of their own.

The family’s detachment figures equally in the nostalgic solo piano music heard behind the opening credits (and frequently thereafter), and in much of the old-fashioned romantic iconography that accompanies the character of Danny, such as the tree that he climbs in order to surreptitiously visit his girlfriend Lorna. Insofar as the Pope family exists in a world that is predetermined by the radical activities of Arthur and Annie 15 years ago, the movie has some rationale for depicting them in a milieu that doesn’t belong wholly to the present, but one can’t always tell how much of this atemporal quality derives from the Popes and how much from the filmmakers. In other words, the problem of representing the radicalism of the past in a contemporary climate is one that the movie doesn’t always know how to solve, except by making the present world that the Popes don’t belong to appear rather insubstantial. (2) Danny eventually meets and falls in love with the music teacher’s teenage daughter, the aforementioned Lorna, who is as eccentric as he is — wonderfully played by Martha Plimpton (the daughter of actors Shelley Plimpton and Keith Carradine). Frustrated about not being able to meet Danny’s family, whose identity he has been trained to conceal, she turns up uninvited at Annie’s birthday party, and quickly becomes integrated in the tight family circle. At one point, all of them get up to dance to a James Taylor song — Arthur with Lorna, Danny and his kid brother Harry (Jonas Abry) with Annie — and the effect is as lovely and, as natural, thanks to the unforced direction, as the classroom dancing demonstration was awkward and willful.

But Lumet can’t resist gilding this lily at the end of the film by pumping up an already strong and effective final scene with the same song, which appears on the sound track as if by celestial contrivance. To me this seems a bit like transcribing a graceful jazz solo in order to forge its notes into bronze. As far back as the 60s, around the time that Annie and Arthur Pope were meeting in college, Lumet was already committing similar errors in over-deliberation by cutting a jarring close-up of Katharine Hepburn into a beautifully modulated retreating camera movement during her final monologue in Long Day’s Journey Into Night (1962), and juicing up a script that was already melodramatically overwrought in The Pawnbroker (1965) with portentous mise en scene.

But in spite of these and a few more minor (if related) blunders, Lumet gives us a whole and densely realized family; its individual members and interactions are detailed with a suppleness that easily survives his interference. Of the four actors who play the Pope family, ten-year-old Jonas Abry is by all counts the showiest and funniest, and Christine Lahti the most subtle and understated; her uncanny manner of registering remote preoccupations with the sensitivity of a seismograph, which brought such distinction to her work in Housekeeping, lends a genuine power to her scenes with L.M. Kit Carson and Steven Hill, who play respectively a former lover and her father. But Judd Hirsch and River Phoenix are also fine in conveying multiple layers behind simple, charismatic surfaces. As a group, moreover, these four have more to say than a dozen Patty Hearsts about the persistence of the 60s and early 70s into the present. 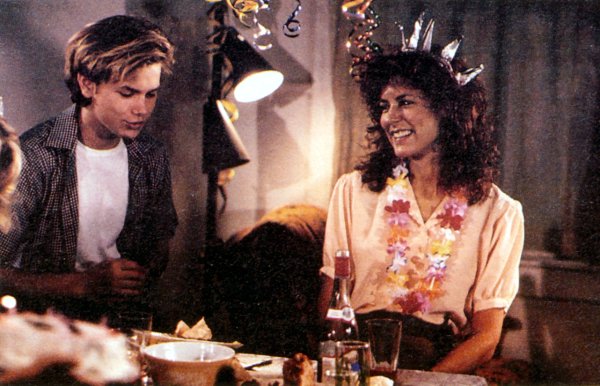