Posted October 29, 2018
From the Summer 2010 issue of Film Quarterly (vol. 63, no. 4). — J.R.
The typical challenge of any film festival report is to create a fictional narrative out of thin air, or a meaningful proposition out of chaos. And this becomes even harder in an era when layoffs of various film reviewers have coincided with a continuing erasure of any clear line separating criticism from advertising in most mainstream venues. The task isn’t far removed from the sort of pretense routinely made by reviewers, myself included, who presume to write ten-best round-ups at year’s end, overlooking the pre-selections already made by distributors and marketers and often arriving at unwarranted global conclusions based on the very finite sampling of what one has seen. This becomes only more obvious and arbitrary when it comes to generalizing about the handful of films one sees at a festival out of several dozens or hundreds, and then creating a narrative thread or some sort of thesis that can connect them all like beads on a string — a process that for me stands out in even greater relief since I retired from regular reviewing in early 2008.South by Southwest in Austin, Texas, commonly known as SXSW, is a combined film festival and “interactive” media conference held for both cinephiles and film professionals, followed immediately by a music festival that’s even bigger. With fond memories of my previous visits to the first two parts of this event as a guest in 2000, 2001, and 2005, when the turnouts were smaller, I went this year (March 11–19) at my own expense and found that everything had grown considerably, as well as haphazardly. The estimated attendance was at least 13,000 people, many of them students aggressively partying during their schools’ spring break. This resulted in several long lines for customers, including me, who didn’t always manage to get into the films (or even some of the panels), sometimes after waiting for as long as an hour. 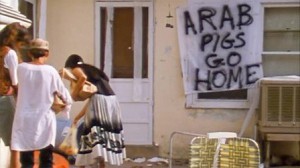 But what kinds of films were we hoping to see? As for the kind of cinema favored at SXSW in the past, this was the festival where I first saw John Gianvito’s Mad Songs of Fernanda Hussein (2001) — still, for me, one of the key American independent features of the past decade. But no less characteristically, it’s also the festival where I once shared a panel with a popular SXSW regular who proudly brandished his dislike of foreign films as a matter of general principle, reminding me of a high-school classmate in Alabama during the 1950s who once declared, “If English was good enough for Jesus, it’s good enough for me.” More generally, the steady erosion of any coherent sense of what constitutes “independent cinema,” ever since figures like Harvey Weinstein and festivals such as Sundance have co-opted the term for their own sales pitches, has been reflected in greater amounts of confusion over what belongs in a film festival and why. (Furthermore, various formulas and catchphrases such as “mumblecore” or “Indywood,” even when they get uncritically adopted by academics, arguably deserve to be regarded as obfuscations by commercial intention rather than as legitimate genres or subgenres.)

By and large, some festivals exist to facilitate seeing certain films and some exist to facilitate selling them. (Sadly, in many respects, the Toronto International Film Festival has gradually mutated in recent years from the former raison d’être to the latter.) In its seventeenth edition, SXSW seemed stuck somewhere in between these possibilities. And it would be perilous to try to make any generalizations about the state of American independent cinema on the basis of what I saw, although perhaps the most enlightening panel I attended was an extended interview with David Gordon Green, who appears to have mastered the tricky business of navigating between studio and independent work without blurring his own understanding of which is which. In effect, any two films seen in succession or in some proximity to one another are apt to create a dialectic and context of their own, implying their own critique and narrative in terms of this relativity. 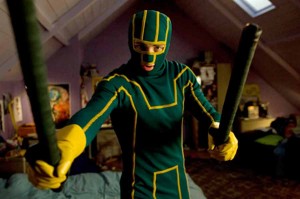 The first two features I saw at SXSW this year offered a case in point. Both are childish romps that were shown at the venerable Paramount (a former vaudeville house dating from 1915 on Austin’s main street, Congress Avenue, a few blocks from the state capital) with all the pomp of Hollywood premieres, and both were set to open commercially not long afterward. Neither qualifies even remotely as a low-budget independent effort, American or otherwise, and both were clearly shown to help launch their subsequent commercial runs. Frankly, I wouldn’t have made it to either movie if a local friend hadn’t selected them, but part of the freedom of no longer being a professional reviewer has been the luxury of stepping outside my usual routines and biases. And considered together, Mathew Vaughn’s Kick-Ass and Jean-Pierre Jeunet’s Micmacs (one of the very few subtitled films at the festival, and the only one I saw) provided a useful object lesson in how responsibly or irresponsibly revenge plots might be used in commercial releases.

Revenge plots are for me an issue of more than academic interest because I doubt whether the invasion and occupation of Iraq could have been sold in the U.S. quite so readily and perfunctorily without the endless preparation afforded by so many kick-ass vengeance sagas. (In a similar fashion, I tend to think the Star Wars movies have also helped to pave the way for such foreign ventures by popularizing the notion of the supposedly “bloodless” war, perceived by the folks at home as if they were videogames.) Perhaps for this reason, I find it difficult to share the enthusiasm of colleagues who celebrate the audacity of Quentin Tarantino, at least since he’s restricted himself to the same sort of simplistic revenge scenarios in his last four features (both parts of Kill Bill, Death Proof, and Inglourious Basterds) that have inspired and/or rationalized American bellicosity. But until recently, following these old-crank bents, I’ve been too simplistically assuming that revenge plots per se are the problem rather than a particular American form of them. Seeing Kick-Ass and Micmacs on successive nights made me realize my error. 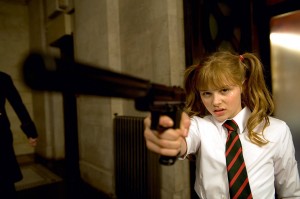 The appropriately titled Kick-Ass, which I only lasted through less than half of, is a sort of feel-good, dismemberment-and-superhero farce derived from a comic book — with pride of place given to a disgruntled and vengeful former cop played by Nicolas Cage, his foul-mouthed and dismembering eleven-year-old superheroine daughter (Chloë Grace Moretz), and a teenage wimp (Aaron Johnson) who yearns for superhero status — that plainly works off some aspects of the Tarantino vengeance template. According to this formula, the conviction that the U.S. or the world (the two often perceived as interchangeable) is run by gangsters is cynically assumed as a root premise of the action without ever being forthrightly stated, and indiscriminate brutality is meted out for kicks that are justified only by moral pretexts rather than by moral positions of any kind. 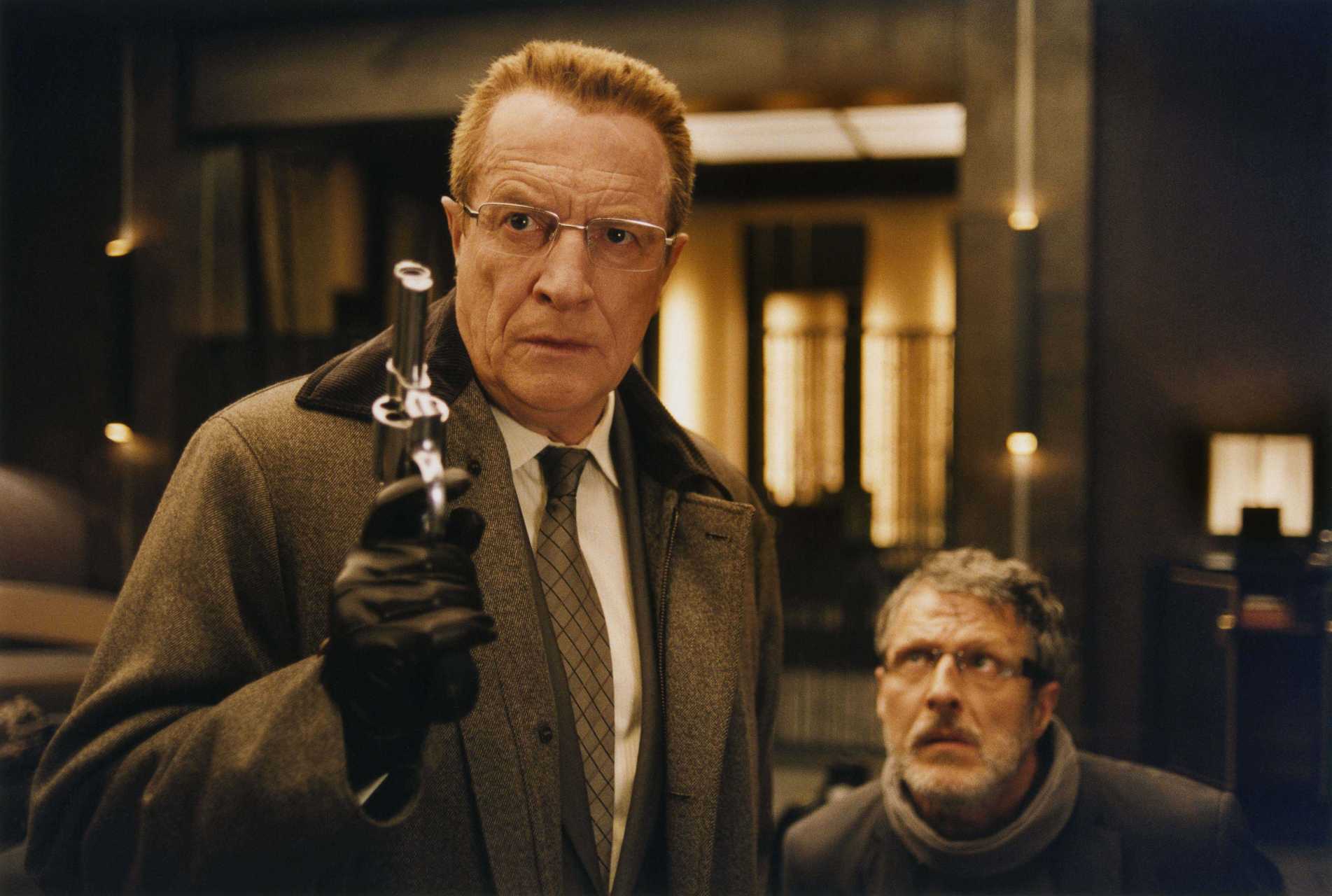 By striking contrast, the villains of Micmacs, including a delightful cartoon performance by André Dussollier, are cynical armaments dealers. This time the hero’s motivations for retribution, as labyrinthine as in any Dumas novel, don’t have to be satisfied by death or even by extreme violence, only by elaborate and widespread exposure and humiliation of the villains via YouTube—with special emphasis given to their crimes in the Middle East. After the screening, Jeunet said onstage to local fan-boy celebrity Harry Knowles that his main narrative inspiration was Once Upon a Time in the West, which deeply impressed him as a teenager. But this postmodernist conceit seemed as improbable to me as Knowles’s own suggestion that Jeunet’s art should be coupled with that of Chaplin and Keaton. And even a superficial comparison of Leone’s epic violence with Jeunet’s whimsical slapstick and Rube Goldberg gag constructions already suggests at the very least a second-degree influence of silent comedy; he’s far closer to the look and feel of Louis Malle’s version of Raymond Queneau (especially as it’s upgraded by William Klein’s wide-angle grotesquerie) in Zazie dans le métro. And the heroes of Micmacs — eccentric societal rejects (including a contortionist played by Julie Ferrier and an uncredited Russian woman, who are digitally combined) banded together as underground Parisian junk dealers, quite unlike the middle-class vengeance-driven superheroes of Kick-Ass — are ultimately more interested in justice than in retribution. The difference was salutary and, for me, revealing, making me realize that unthinking revenge and revenge as an art form may be interchangeable for Tarantino; but for Vaughn and Jeunet they are worlds and ideologies apart.

All the other films I saw in Austin were genuine low-budget independent efforts, most of them shown on the various screens of two popular multiplexes, both of them known as the Alamo, that serve meals and alcohol on long counters located in front of the rows of seats in all their auditoriums. Waiters creep by periodically and quietly to accept the clients’ written orders, serve them, and even deliver bills and change while the films are still playing, so that two forms of consumption are unfolding concurrently. But one can become aware of a discrepancy, or a conflict of interest, if one wants to walk out of a movie after ordering food or a drink. 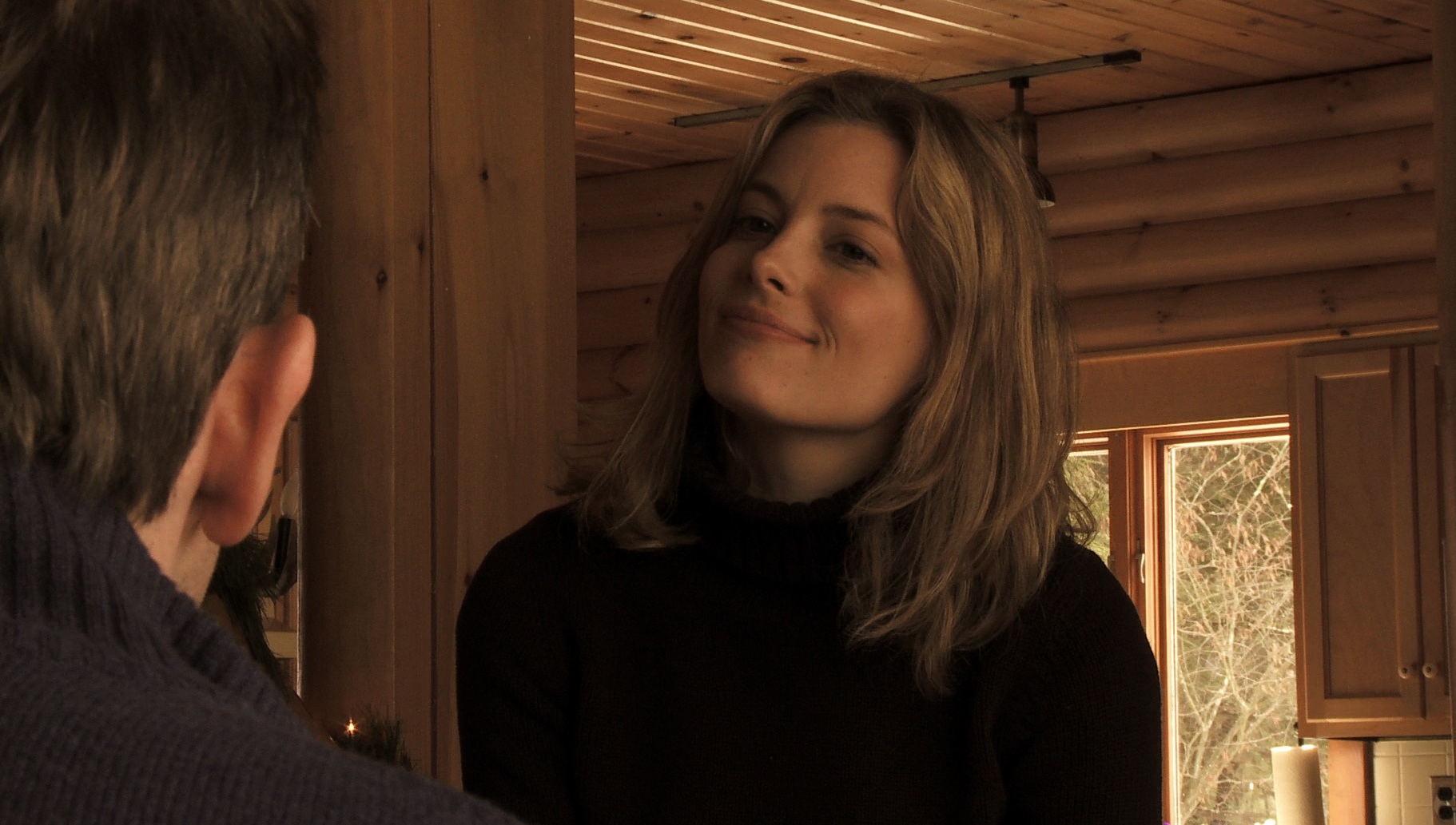 Among the pure fiction films that I saw, the most promising and absorbing was Joseph Infantolino’s deftly written and acted Helena from the Wedding, a comedy drama which plants a playwright and his newlywed wife and a few other couples and friends in a small mountain cabin in New York for a weekend to celebrate the new year, leading to various forms of disassembly, tension, and potential regroupings. But not surprisingly, most of the better items I saw in Austin were either documentaries or fiction films informed by documentary. The first batch included When I Rise, Mat Hames’s documentary tribute to Barbara Smith Conrad, an African American opera singer who hailed from East Texas, attended the University of Texas (in Austin), and, in 1957, was forced by members of the state legislature to bow out of a campus production of Dido and Aenas in which she was set to costar with a white male, which ultimately led to Harry Belafonte sponsoring her singing career in New York. Last year, a half-century later, the Texas state legislature publicly apologized to her, and because the University of Texas produced this feel-good but informative and carefully researched film, it seemed natural that a local premiere, with Conrad in attendance, was another high-profile event destined to play at the Paramount. Other straight documentaries included the delightful short, Keep Dancing, about ninety-year-old dancers and choreographers Marge Champion and Donald Saddler and their new New York studio, shown together with NY Export: Opus Jazz, a resourceful restaging of Jerome Robbins’s 1958 ballet in diverse New York locations, and Matt Harlock and Paul Thomas’s American: The Bill Hicks Story, about the political and personal development of an ambitious and troubled Texas-born stand-up comic who died of pancreatic cancer at thirty-two. 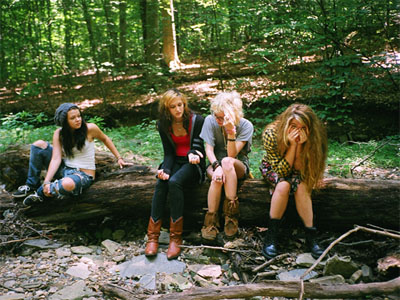 By far the best of the mixtures of documentary and fiction that I saw was Matt Porterfield’s mainly fictional and beautifully shot second feature, Putty Hill, about teenagers in working-class Baltimore. Working without a script, Porterfield’s slim, long-take narrative about various friends and acquaintances gathering for the funeral of a friend who died of a drug overdose effectively incorporates interviews with the actors in the same settings, whose own identities clearly overlap at various points with those of their characters. I haven’t yet caught up with Porterfield’s previous feature, Hamilton (2006), which employs a similar mix of strategies, but it seems to me that he’s onto something fruitful. At least to my own taste, what generally defines “cutting-edge” in new cinema of any kind — from Godard to Pedro Costa, from Cassavetes to Albert Brooks, or from Michael Snow to Jia Zhang-ke — usually entails some interaction between fiction and nonfiction that ultimately challenges the firmness of both categories.